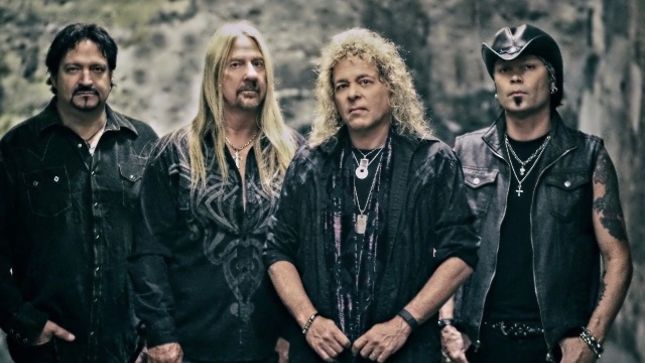 Iconic rockers Y&T recently made the decision to offer fans VIP packages on their upcoming West Coast run. Frontman Dave Meniketti has been vocal in the past about not offering up extras to the fans for money, and his wife / manager Jill has posted a message online to explain the situation:

"As expected, the band has already received a few comments about their newly launched Sound Check Experience (at select shows). Let me set the record straight.

The guys will still come out and meet the fans *after* their shows where possible--BUT--that is NEVER a guarantee and should never be expected. There are many factors involved every day at every show that impact this.

Why did we add this cool new Sound Check Experience option? I'll explain below. And for those of you who really feel you need someone to blame for this new added-value experience (which I think is a cool addition--I'd buy it for my fave artist!), I'm your fall girl.

Touring has become ridiculously expensive. As the band's manager, after this last US tour I told the band that they either need to start charging for meet & greets like every other band or stop touring altogether. It's that critical. Travel prices continue to escalate yet the band's performance fee does not. For example, for this upcoming European tour, the prices for hotels, gear rental, crew fees, flights, ferries, etc., continue to rise--each year--so much so that I had told the band that 2019 may very well be the last time Y&T tours Europe.

Many of you already know Dave's feelings about charging for a meet & greet--he won't do it. But the band LOVES playing live and they don't want to stop touring. So the guys got creative and thought it could be a fun vibe to open up sound checks (Y&T sound checks have always been closed) to those fans interested in purchasing a special, intimate experience beyond the show. The guys didn't want to do a typical cattle-call meet & greet; instead, they wanted to offer something that few people get to experience. Aside from the "cool factor" of seeing a real sound check, with that comes more special stuff, like an exclusive photo that's not available anywhere else but for the sound check package, a commemorative laminate & lanyard, a special Y&T tote bag not available anywhere else, and so on. We've limited it to just 20 people (or just 10 couples, for those pairing up).

And that's what we've done to help salvage touring. Charging for extras is what most bands must do now in order to afford to continue performing. It's just the state of the business.

I'm not at all complaining, just explaining.

Don't like it? Not interested? Don't participate. It's that simple. Just buy a ticket to the show and nothing at all has changed for you. But the band & I think this is a very cool add-on experience."

Y&T's tour schedule is as follows: