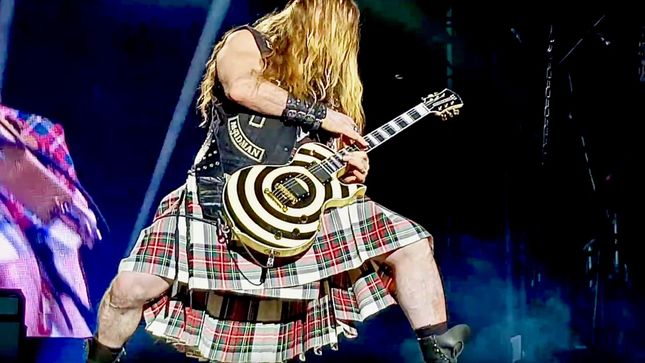 In a brand new interview, Zakk Wylde comments on the possibility of a new album from Ozzy Osbourne, saying, "That would be up to the boss". Zakk made his comments while speaking to eonmusic, at the Metal Hammer Golden Gods Awards, which were held in London on June 11th.

On hand to present Ozzy with the Golden God award, the guitarist was in jovial form, having just played a headline set at Download Festival the previous evening.

Speaking about being back on stage with Ozzy, after an absence of a number of years, Wylde said; "It’s all good, it’s great; I enjoy every second of it."

Going on to talk about the setlist, which focuses heavily on 1991 release No More Tears, Zakk commented; "With the setlist, I mean, that’s where we are right now, because obviously we’re going to be out for a while, so I’m sure it’ll change, it’ll mutate into other things."

When asked about the possibility of a new album from Ozzy, Zakk said that he was ready, should the Black Sabbath front man want to enter the studio. Said Wylde, "That would be up to the boss. If he’s just like; 'Zakk, have you got any riffs laying around?', it’s just like; 'Yeah'; like it’s pretty much that easy. That’s how we’ve always done it in the past. It’s not rocket science, we’re not making Mahavishnu Orchestra records here, you know what I mean?"

Read the full interview at eonmusic.

The second annual Fear The Riff Expo will be coming to Brooklyn on August 11th. Gearheads, effects aficionados and fans who want to meet their heroes alike will enjoy the event, happening at the Brooklyn Expo Center from 10 AM through 6 PM.

The Guitar industry is in the midst of a true renaissance. A surge of innovative boutique and small batch crafters have carved out an exceptional market for true tone seekers and gear heads. Fear The Riff is proud to have assembled the best in boutique guitar effects, amps and accessories in the country's greatest city, New York. For one day, 60-plus vendors will converge upon Brooklyn's Expo Center to demo their latest creations to industry, press and of course music fans from all over. Fear The Riff Expo is the perfect environment for makers to network, get exposure for their latest creations and sell inventory on-site directly to the public.

Fear The Riff Expo will feature many artist showcasing their endorsed product including Zakk Wylde, who will be on site showcasing his brand Wylde Audio while meeting fans and doing a signing session. Zakk will be doing his Meet & Greet from 12:15 to 1:30 PM.

Fear The Riff Expo has put together a leading line-up of both emerging and established companies. Vendors like Ernie Ball, Seymour Duncan, Marshall Amps, Roland, PRS Guitars and Boss will be a part of the show.  Along with trailblazing pioneers like Jim Dunlop, to boutique mainstays like Champion Leccy, Line 6, Pigtronix and many others.

Fear The Riff is the ultimate destination for musicians, gear lovers, sound enthusiast and rock and roll thrill seekers.

Sam Ash will also have a "used gear" buy back station set up on-site! Attendees can trade in old and used pedals for cash making new additions to their arsenal possible.

While you are satisfying your craving for gear, you will also be able to enjoy craft beers, specialty cocktails and award winning BBQ from a TX Pit Master.