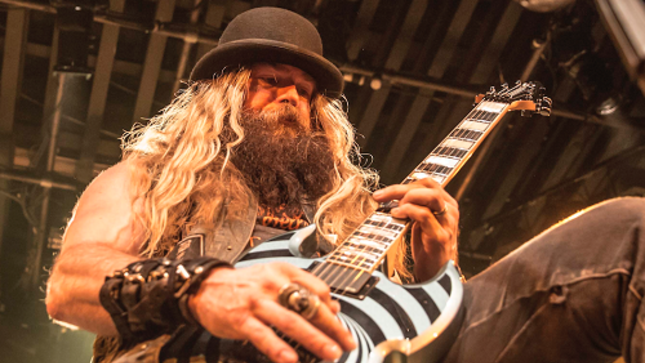 Guitar legend Zakk Wylde recently guested on The Wikimetal Happy Hour, and during the interview he commented on the highlights of his career. Check out the chat below.

Zakk: "To me, the joy is in the journey. We could barely bench 135, and then you finally get to 315, it's all the steps along the way. Just like playing guitar; when I first started, and then you are just doing your finger exercises, and then when I could finally play a lick to 'Back in Black', I was like, 'Oh my god, I can play!' That was a major breakthrough. That helps you get to where you got to go. I've always enjoyed the process of the whole thing.

Obviously, you have memorable moments along the way, as you said: the Moscow Peace Festival, the first show I ever did with Ozzy in an arena was in Pensacola, Florida, so I always remember that. And when the lights went down, it was like, 'Oh my god, this is the coolest thing ever!' That and all the festivals along the way, and all the experiences I've had with Black Label, with Pride And Glory, and then the Book of Shadows stuff, doing shows with that.

I love the process, the whole journey. I'm truly blessed."

September 17th marked the 30th anniversary of Ozzy Osbourne’s sixth solo studio album, No More Tears, originally released in 1991 via Epic Associated. Peaking at #7 on the Billboard Top 200, No More Tears has since been certified quadruple platinum in The United States, and double platinum in Canada.

To celebrate the three-decade anniversary of No More Tears, an expanded digital deluxe edition, as well as a pair of 2LP vinyl special versions were released. The digital release includes an updated interpretation of the track “Hellraiser” featuring the first-ever official version of the song with a mash-up of vocals from Ozzy and the song’s co-writer, longtime friend and colleague Lemmy Kilmister of Motörhead.

“Hellraiser” originally appeared on No More Tears; Motörhead then recorded their own version and released it as a single from their 1992 March ör Die album. “Hellraiser” was one of four songs from No More Tears co-written by Ozzy with Lemmy; the others are “Mama, I'm Coming Home”, “Desire”, and “I Don't Want to Change The World”.

Speaking exclusively to BraveWords scribe Aaron Small, Ozzy Osbourne guitarist Zakk Wylde commented on the new version of “Hellrraiser” saying, “I just heard it. Lemmy and Ozzy on the track, how could you lose on that one? I think it’s great!”

30 years seems like forever ago, but those songs are just as vital today. “No More Tears” and “Mama I’m Coming Home” are still in regular rotation on both satellite and FM radio. Zakk Wylde shares his recollections of recording the No More Tears album.

“Aside from having an ass-kicking time… every Ozzy record I’ve ever done; we’ve had a blast! But for that one… No Rest, I was 19, 20 years old when we were writing and recording that. Obviously, you’ve got to prove yourself, it’s more that kind of weight going into it. But it wasn’t, because Ozzy and the whole camp made me feel relaxed. To me, it was a massive honor because I looked at it like wearing Yankee pinstripes. You had Babe Ruth, Mickey Mantle, Lou Gehrig, Joe DiMaggio, and what’s expected out of you once you put that uniform on. The whole thing, that’s the way I’ve always looked at it. Not so much that you had massive pressure on you… when we did No More Tears, there was less of that.”

“I had such a great time making all of them,” continues Wylde. “When we did ‘Mama I’m Coming Home’, me and Oz did that on piano first. Then when I got the 12-string, that’s when I transposed it to what it is that you hear, with the guitar line. But originally, it was just on the piano. Me and Ozzy had all the chord changes, and everything like that.”

“When we wrote ‘No More Tears’, Mikey (Inez) started that off with the bass, just like you hear on the record. John Sinclair started playing the keyboard bit, Randy (Castillo) was playing drums, and I started using the slide cause of my love for the Allmans, Skynyrd, and everything like that. I had the slide sitting there and I came up with that line, it was reminding me of ‘Free Bird’. That’s why I ended up putting that thing in there. Then the riff... obviously I got that at the Tony Iommi garage sale, I bought that one for $12,” jokes Zakk.

“That one just kind of came together. But actually, the middle bit, the piano bit, I remember when I was writing that stuff, and John elaborated on it. I remember writing like a Pink Floyd / Beatles type thing. The piano that I ended up writing that stuff on, was the same thing that I ended up writing (BLS song) ‘Love Reign Down’ on, in the studio then. We had a blast making that record. I remember we recorded it twice. We ended up doing it in Bearsville, and at A&M. Everybody involved with that thing – Michael Wagener, Duane (Baron), and John (Purdell) – everybody did a stellar job. Like I’ve always said with Ozzy, it’s a miracle any work ever gets done, because we’re always on the floor crying, laughing.”