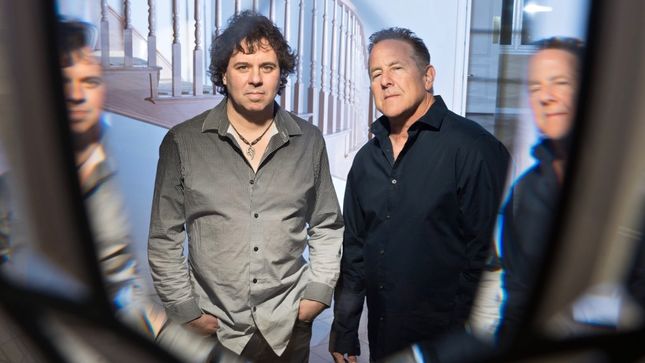 Zonder/Wehrkamp (aka ZW Band) consists of drummer Mark Zonder and multi-instrumentalist and singer, Gary Wehrkamp. Gary and Mark have long collaborated on songs and appeared on many of the same records. They toured together in 2014 and returned to craft this new record.

If It’s Real, out May 25, resonates with a tenebrous emotional intensity wrapped in a more melodic, ethereal sound and philosophical take on progressive hard rock. A limited number of autographed pre-order CD's are available here, to start shipping May 10.

While Zonder and Wehrkamp will be releasing more official videos in the coming weeks, today they present a deeply touching dark video for the album's title track, “If it’s Real”. Watch below.

Gary Wehrkamp on the video: "The song, 'If It's Real' is where the album began for Mark and me. With a lyrically dark song like this, we wanted the video to represent that feeling with provocative imagery that some people might call disturbing. While it was a challenging shoot to pull off, we really embraced the creativity we put into it.  Director, Paul Dworakivsky did a great job. On the music side, the song also has one of my favorite drum tracks of the records."

Gary Wehrkamp on the song "Two Years": "Because Mark and I have a lot of musical history together along with our own separate projects that have passionate fan bases, I thought putting together a video slideshow that celebrated some of those moments and introduced our new band would be a cool and fun way to usher in the new song."

Long known for their work in the progressive and underground metal scenes in bands like Warlord, Shadow Gallery, Amaran's Plight and Fates Warning, guitarist Gary Wehrkamp and drummer Mark Zonder are exploring darkness in a brand new light with their new band, Zonder/Wehrkamp (aka ZW Band).

The collaboration results in the album If It’s Real, which resonates with a tenebrous emotional intensity wrapped in a more melodic, ethereal sound and philosophical take on progressive hard rock.

In the last two decades Zonder and Wehrkamp have co-written nearly 100 songs together for various projects and toured together for a reunion of Zonder’s seminal cult band Warlord.  When the two were approached by a metal label to record a moodier, less traditional prog-metal album, they ran with the idea.

“We have spent a lot of time over the years doing traditional over the top prog and have some really great stuff, but when we were asked to do something different by the label, we dug in and really started to push the envelope on the production side of things,” said Zonder.

While the label situation wasn’t right, the organic result of their studio sessions was music that--while not as heavy or as fast as their previous bands--still contained a thematic and sonic link to their progressive roots with a brooding depth and complex instrumental performances.

From songs like the title track that delves into mental anxiety and suicide to cuts like “It’s Not the End” with a message that brings the listener back from the brink, “If It’s Real,” delves into how we cope with simply being alive and, many times, alone in our own minds.

“This album traces the journey of the human condition through an array of emotions ranging from painstaking pitfalls to glimmers of hope,” said Wehrkamp.

While Zonder/Wehrkamp takes the two musicians on a different path, their musical pasts are very much influences on their current project.

One of the most influential drummers in metal history, Zonder burst onto the scene with Warlord in 1982 and went on to play drums with prog-metal heavyweights Fates Warning for eight albums starting in 1989.  With periodic Warlord shows on the European festival circuit, involvement in the bands Slavior and Spirits of Fire and stints with artists like Graham Bonnet and Arch/Matheos, Zonder maintains a steady presence in the metal world.  Since 1993, Wehrkamp has been one of the guitarist/keyboardists in the innovative progressive metal band Shadow Gallery, which released six studio albums between 1992 and 2009 on labels like Magna Carta and Inside Out.

Having made critically acclaimed records and toured the world playing to hundreds of thousands of hardcore metal fans, Zonder and Wehrkamp are betting the departure from their musical roots will still generate enthusiasm from long-time followers because the soul and authentic creativity they’ve always delivered is the driving force behind this music, too.

“This album isn’t about doing something different for the hell of it,” said Wehrkamp.  “It’s about challenging ourselves to step outside our own self-imposed boundaries and expectations and dare anyone who pushes play on these songs to do the same. This record is all about introspection and discovery.  And we want our fans to take the trip with us.”