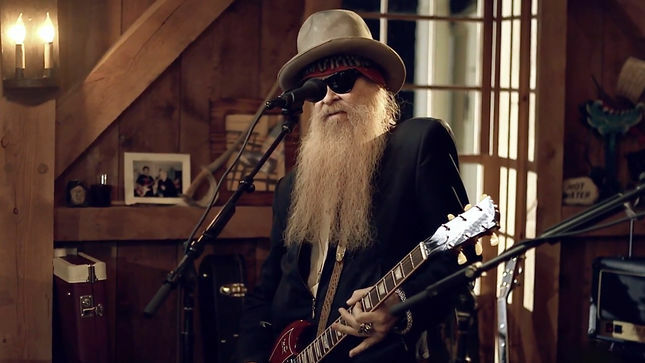 According to KSHE 95, ZZ Top frontman Billy Gibbons will sit in with ABC’s Jimmy Kimmel Live! house band on November 17th. He will perform with the actual Gibson Flying V that guitar legend Jimi Hendrix used on his 1970 tour, including his appearance at the Isle of Wight Festival in England. The guitar, part of the Hard Rock International’s collection, is being transported from London just for the show.

Gibbons: "We’d been friends since 1972. Our first encounter was way before then, back in Houston, Texas. But our first professional engagement was in 1972. I was backstage in my dressing room when he took an interest in my guitar and wanted to see what it felt like. I was only too happy to say yes.  At the time, I was playing some pretty heavy-gauge strings, and BB said to me: 'These are mighty heavy. Why are you working so hard?' He handed (his Gibson guitar) Lucille over to me and said: 'Give this one a go.' I discovered the strings were extremely light, which kind of made perfect sense."

Gibbons: "I was a big fan of Ministry from their early days. Again, Houston, Texas springs to mind. They blew through town playing a weekend warrior venue, at a place called Numbers. This was a wild venue, with the stage in the middle of the room and the audience on all four sides. It was such an insane place, and its reputation drew in the fiercest of the fierce, which meant the owners had to put up chicken-wire around all four sides of the stage. Jourgensen made the most of it, climbing around like a caged beast. I knew right then that this was a guy for me. We stuck around and became friends from that moment.

Much later he was recording at Sonic Ranch Recording Studios, a superb outfit that houses three studios. It’s one of the biggest in the world and even has its own pecan orchard. Al was wrapping up this Revolting Cocks album and he offered me to pop along and lay down some slide guitar work. That was a perfect time for some rocking and rolling."

Gibbons: "'Rockstar' was quite an unexpected success. We were touring the US, up the North West. It was the day before our own show, they were playing and we were curious, so we popped down to catch the band’s performance. You have to note the great vocal stylings that Chad Kroeger can bring to the party. Man, he can sing for days.

Anyway, after that inauspicious first meeting, when the time came for them to get back into the studio, I believe Chad had the idea to complete 'Rockstar' as a studio-based song. He had most of it but felt he needed something extra, so he called me up to see if we could make some sense of it. He dreamed up the vocal inflection that I sang, and I reckon it came out okay."