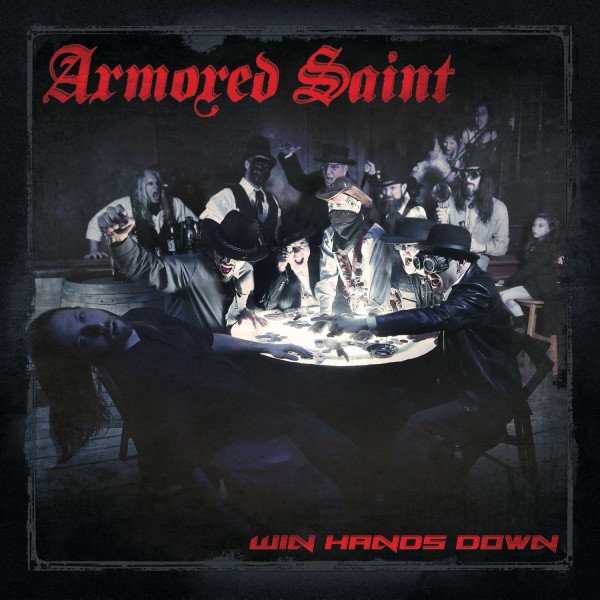 Although I heard some of these songs before and during their opening slot on Saxon's recent mini-tour, still pleasantly surprised by these nine tracks. Live, here and abroad, Armored Saint are in fine form, playing a collection of oldies, but a vocal critic of La Raza, I cautiously approached Win Hands Down. No need to be reserved, as although they opt for some non-traditional ear candy (jangly embellishments in "Mess" and the funky/hi-hat & bass, Shaft influenced start to "Muscle Memory"), the vibe is aggressive (and wholeheartedly vintage 'Saint', with plenty of guitar), easily the most thorough release since Symbol Of Salvation. The aforementioned "Muscle Memory" also employs a hint of veiled Hammond organ.

"That Was Then, Way Back When" is John Bush's cynical look at life in music and/or Los Angeles, including the line, "My 15 minutes came and went. Somebody knows me. Somebody loves me. These are my friends! I can't accept I'm a hasbeen. I got lost on purpose, so I could be found". Great guitarwork on this one. Another glimpse of yesterday, beyond the lyrics. 'With A Full Head Of Steam' is truth in advertising, guitar screaming as the track kicks off and guest appearance by Pearl Aday, daughter of Meat Loaf. On the opposite end of the spectrum, but juxtaposed in the running order, is the acoustic laden, meandering ode to '70s freeform, "In An Instant". Listen to the guitar tones, late in the 7:36 song. "Drive" takes things even further, opting for a proggy/ballad, with copious use of piano and acoustic guitar: somewhere between Pink Floyd and Alice Cooper's "Ballad Of Dwight Fry". To bring things back to reality there's the pissed off "Up Yours" finale. Ornery old man, go out with a guitar flourish and an F-bomb. Yeah.