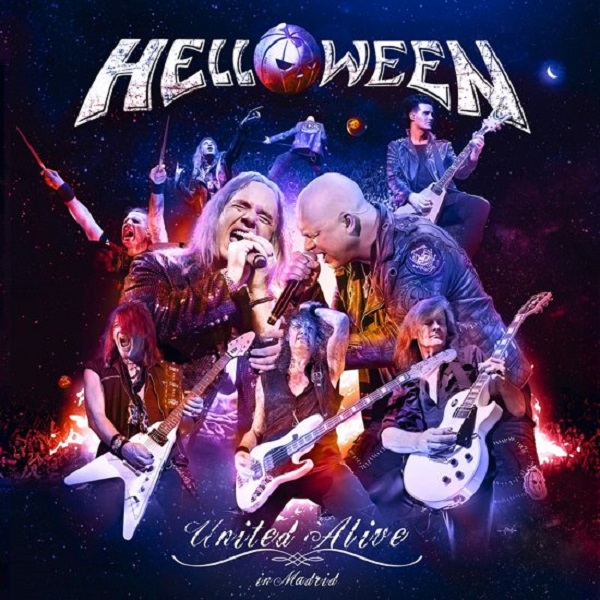 Anyone who saw one of the Helloween: Pumpkins United shows last year, knows how special it was. Hopefully the new studio effort will approach similar magic. Until then, you can relive the experience, courtesy of CDs and/or video. While the live audio is nearly three hours in duration, it's missing some of the tracks played in North America, replaced by a few not aired on these shores. Apparently the DVD/Blu-Ray packages include some of those extras, as well as a half hour documentary/interviews with the band. The comical cartoon animation shown onscreen, during the concert, is also supposed to be part of each format.

If, for some reason, you missed the 2018 concerts, the trio of lead vocalists (Andi Deris, Michael Kiske and Kai Hansen) are all afforded solo showcases, but it's the three, in combination, which is truly the landmark operation. Having three guitars also makes the sound beefy. Opening with the mammoth “Halloween” introduces everyone onstage, right from the start (photographers having a chance to snap any/all of the participants). Plenty of high vocals, from Deris and Kiske. Hansen, long the voice of Gamma Ray (until recently abdicated a portion of the lyrics to Frank Beck) has a medley of vintage Weenie songs (back from when he was THE singer), although “Heavy Metal (Is The Law)” (with its F-bomb call & response passage) is rolled in with the others, not a separate tune. Since this show was in Spain, the fans are boisterous, singing-along throughout, but then weren't we all, regardless of locale (Deris prods the crowd with the occasional banter in their native tongue).

“If I Could Fly” is a rare “cool down” moment, especially after the back-to-back hit laden intro (“Halloween”, “Dr. Stein” and “I'm Alive”). Heavy dose of pre-recorded keys on “Are You Metal?” The audience gets into a titular call & response with Deris. Next is “Rise And Fall” (which was not part of either show I witnessed: NYC and Karlsruhe, Germany). Poppy “Waiting For The Thunder” does have a nice twin guitar section. In addition to thousands of extra voices, “Perfect Gentleman” sees Kiske interrupt, and toy around with, Deris. One of the first gigs (recorded in December, 2017), Hansen's aforementioned spotlight (abbreviated renditions of “Starlight”, ”Ride The Sky”, “Judas” and “Heavy Metal (Is the Law)”) comes almost half way through this 20 song collection, a little later than it would appear, as the tour progressed.

Speaking of changes, the portion that immediately precedes Dani Löble's (nonexistent) drum solo, offers material scuttled on later dates, beginning with (as Kiske calls it, “a slow song”), the Deris begun (and later Kiske accompanied) “Forever And One”, which ends with “ole ole ole” soccer chant. Another ballad follows: “A Tale That Wasn't Right”, as Kiske explains, “The song is 30 years old. I was 18 years old and had long blonde hair. Always wanted to look like Elvis Presley, but ended up looking like Rob Halford.” Just the opposite, here, as Andi joins Michael. While “I Can” did make its way into the starting line-up (as on the second NYC date), it was more sporadic.

Just a teaser of “Livin' Ain't No Crime” segues into the superior “A Little Time”, Kiske in fine form, backed by a Spanish choir comprised of tens of thousands of voices. While performed, “Why?” has been cut from the CDs, going right into “Sole Survivor”. Echo of crowd singing can be heard throughout fist pumping “Power”, before old school “How Many Tears” closes the proper set, all three singers on the mic. The last five songs take almost 50 minutes, by themselves!

Returning for the encore(s), it's lively “Eagle Fly Free”, complete with symphonic “Invitation” intro. Glorious “Keeper Of The Seven Keys” lasts 17:03, yet never seems that long. Does include Hansen on guitar and crowd doing their “whoa whoa” German sing-along impression. By the time of audience introduced “Future World” (Hansen adds a smattering of Grieg's "Hall Of The Mountain King") and “I Want Out” finale, everyone is in party mode.

Glad to say, the later dates developed into an even more cohesive/rocking set.