Inside Metal – Flying V: Stories In Black And White 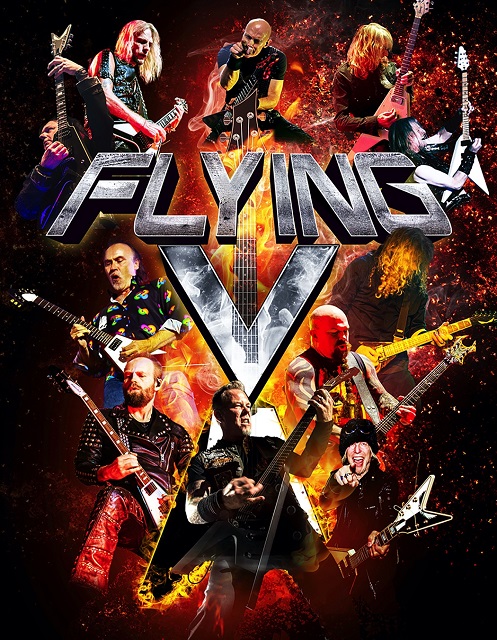 52 minute documentary about the fish tailed axe that's as much a part of heavy metal lore as chains/studs, denim & leather, or anything else. While it's labeled as lasting 67 minutes, that included credits, which tell where each of the interviewees were filmed. Co-produced by Mercyful Fate guitarist Michael Denner, and released as part of the ongoing Inside Metal series, at least there's some credibility behind the camera, knowing of what they speak and where to focus. That said, most will be interested in the comments from the parade of luminaries trotted out. Ironically, in the late-‘50s, no one wanted to buy Gibson's initial run of 98 guitars, it was too "futuristic."

As the title intimates, all the interviews are conducted in b&w, for continuity, and to match the historical footage/photos that kicks things off. Even modern, live clips are colorless. After the info, the narrator almost bows out and the talking heads (KK Downing, Hetfield, Schenker, Mike Amott, etc.) start waxing about their first V: when/where & why. Almost all were drawn to the uniqueness of the shape, stood out as making them, different. Moving the timeline to the '67 reissue, we also hear from Wolf Hoffman, Andy Powell/Wishbone Ash (who are often credited with being the first to bring the guitar to hard rock/metal circles), Mathias Jabs, Denner and his tandem partner, Hank Sherman. Once we get to the newer (‘80s era players) Mustaine, Kerry King, etc. they enumerate all the innovations they want to be known/credited for bringing to the guitar.

It's mostly hit & run commentary (nothing real in-depth) from the current guys in Priest, Andy la Roque, Brian Tatler, but as the focus shifts to "aesthetics" (paint jobs, modifications, etc.), leave it to Mustaine to keep it real, "You want a guitar that plays great and sounds great." About 30 minutes in, it all gets a little too technical, when everyone starts to talk about swapping pick-ups, specs and custom designs by all the modern guitar companies. Geared to guitarists/gear heads, NOT rock fans. Speaking of fandom, interesting to hear who inspired these guys, including Ace Frehley being the impetus for Fate's Sherman! Towards the end, they talk about what makes it their favorite guitar.