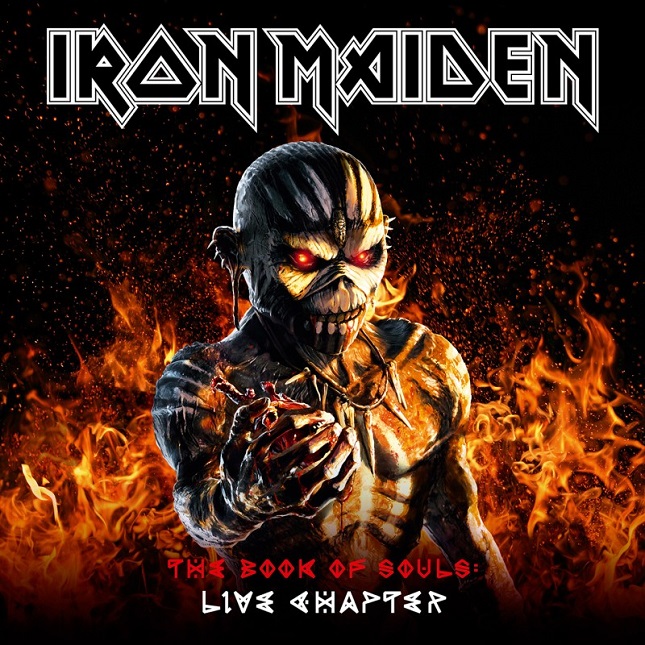 Twin disc compilation of live performances from last year's world tour. In total, recreates the setlist at each concert stop. Since Steve Harris had literally hundreds of shows to choose from, the performances are impeccable. “Children Of The Damned”, from Montreal, is the lone North American inclusion, the rest being big (Wacken) and small (just over 1,100 capacity at Ryōgoku Kokugikan, in Tokyo) stops around the globe. Inside, in addition to a letter from manager Rod Smallwood and a map of their journey, a collage of photos/backstage passes adorns an action shot of each member. However, this really is a celebration of Bruce Dickinson's triumph over throat cancer, a situation that could have easily derailed the singer's career, as well as Maiden itself.

Guess the “complaint” was that this tour was not the definitive set, but rather a promo for Book Of Souls, with no less than a half dozen selections from said disc (at the expense of the vintage catalog) comprising half the concert, in terms of time. The band were also in the midst of yet another lawsuit over the conspicuously absent “Hallowed Be Thy Name”. That said, wouldn't mind hearing a couple of Soul-ful tracks, moving forward, including the urgency of “Speed Of Light”, married to similarly rambunctious “Wratchchild” on this tracklisting. Noticed at the time, and repeated here, the show alternates between a pair of newbies, then two oldies, until the encore, which paradoxically includes “Blood Brothers”, never a definitive Maiden track, but I assume (given the significance of Bruce's return), it means more to the band than ever (also from their reunion Brave New World CD, Dickinson's first return to the fold).

The singer speaks French to the Montreal audience, who respond in kind, adding their collective voice to the chorus. “The Red And The Black” (not the ‘70s Blue Oyster Cult gem) is an extended guitar jam, with plenty of “whoa whoa” augmentation from the Japanese crowd. At 13:17 it's the live album's lengthiest option and actually a few seconds shorter than its studio counterpart. “The Trooper” and “Powerslave”, back-to-back, closes the initial disc in fine form, although all the visual imagery of the concert (changing backdrops, digital animation, Eddie, etc) are lost. The trio of material that begins the second disc (“The Great Unknown” and “The Book Of Souls”, in particular, alongside “Fear Of The Dark”) really drags. Opening with the second “Scream for me...” heard throughout, their lively signature track corrects things, but only after 25 minutes has elapsed. The Argentine crowd singing the guitar harmonies, as well as the entirety of the lyrics! Wacken crowd sounds surprised to hear the booming voiceover to introduce “The Number Of The Beast”, but the huge throng quickly throws their vocal weight behind it. Not before another “Scream for me...”, “Wasted Years” sends everyone home, if not (completely) happy) at least on a high note.

So if history is any indication, the next Iron Maiden tour should be another “greatest hits” resurrection. Hope so.