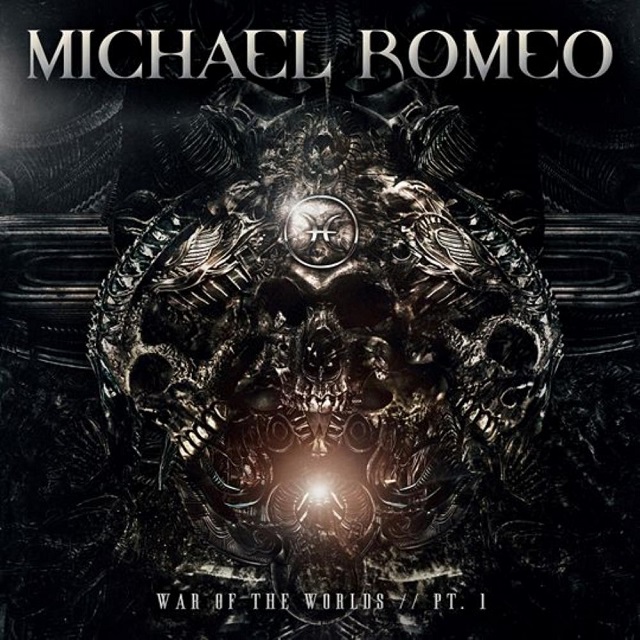 Along with a 1994 demo recording, The Dark Chapter, New Jersey’s own guitar shredder on the map, Symphony X’s Michael Romeo, releases his first official solo album. Three years since the last Symphony album Underworld, and four before that and Iconoclast, Mike finds time to create independently. Joined by singer Rick Castellano, John “JD” DeServio (Black Label Society) on bass, and drummer John Macaluso, War Of The Worlds is not very different from his day job. What then separates Romeo as an artist between Symphony X, and what he writes for himself?

“Introduction” is just that, a layered orchestrated instrumental at first fitting on a movie score, but one that has a darker edge with those guitars, drums, and bass included. “Fear The Unknown”, “Black”, “Oblivion”, “Djinn” and “Differences” are charging slabs of prog metal, complimented with keyboards, very much in the vein of the aggressive tempos from the last three Symphony X albums. Romeo laying down some killer reflective lead work as usual. Castellano has tone similarities to Russell Allen (Symphony X), melodic, a little gritty at times. The voice sounds good with Romeo’s direction. “War Machine” is another recognizable instrumental perfect for the X, or even the Trans Siberan Orchestra.

“Fucking Robots” is Michael doing some different things, thinking outside the box. A combination of digital sounds and samples, some vocals thrown in between, and very Devin Townsend like in its off kilter art direction. This song, and other creative ideas, should have been the inspiration for the album. Disney-esque “Believe”, and “Constellations” in arrangement (and orchestral accompaniment), again sound too much like left overs, or for the next, Symphony X, album.

Look, its great music, well put together, but 90% of it should just be the next Symphony album.