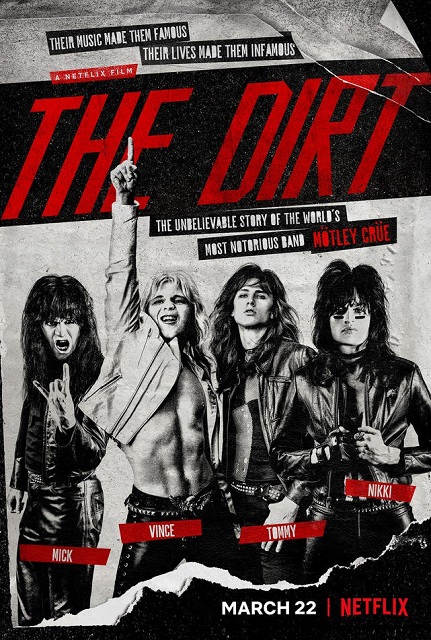 First published in 2001, The Dirt is Mötley Crüe’s best-selling autobiography. Now, 18 years later, this sordid true story hits your television screen courtesy of director Jeff Tremaine (Jackass) and Netflix. Given the copious amounts of drug use, sex, and coarse language, this could only be a Netflix production; a traditional theatrical release would have seen the film censored so heavily, it couldn’t have done justice to the drunken debauchery contained within.

The confessions of the world’s most notorious rock band are well known, the big question is, will the actors involved be convincing in their portrayal of these beloved hooligans? The answer is a resounding yes! Rapper Machine Gun Kelly is perfect as drummer Tommy Lee, capturing his every mannerism and idiosyncrasy. Iwan Rheon (Ramsay Bolton in Game Of Thrones) provides unexpected but welcome laughs as guitarist Mick Mars. Douglas Booth is spot-on as bassist Nikki Sixx, the mastermind and leader of the group. Daniel Webber does a great job as vocalist Vince Neil, immersing himself in the role whole-heartedly. Even Tony Cavalero, who has a cameo as Ozzy Osbourne, is tremendous as the Prince of Darkness.

With a running time of 1 hour and 45 minutes, The Dirt doesn’t bring every printed word from the book to life; selective editing has occurred. For example, Tommy’s marriage to Heather Locklear is re-enacted, yet Pamela Anderson is not mentioned at all. And the reunion with Vince, after the self-titled album with John Corabi, comes across much nicer than how it actually occurred. That being said, this must-see movie is an unbelievable roller coaster of emotions, highlighting the professional triumphs, and personal tragedies of Mötley Crüe; neither of which are in short supply. With a focus on the band’s hedonistic lifestyle and its consequences, rather than songwriting and recording, the pace moves quickly, especially in the back half. But throughout it all, both the camaraderie and animosity that make Mötley Crüe the Toast of the Town will have you talking about The Dirt for days on end.