RHAPSODY OF FIRE - Glory For Salvation 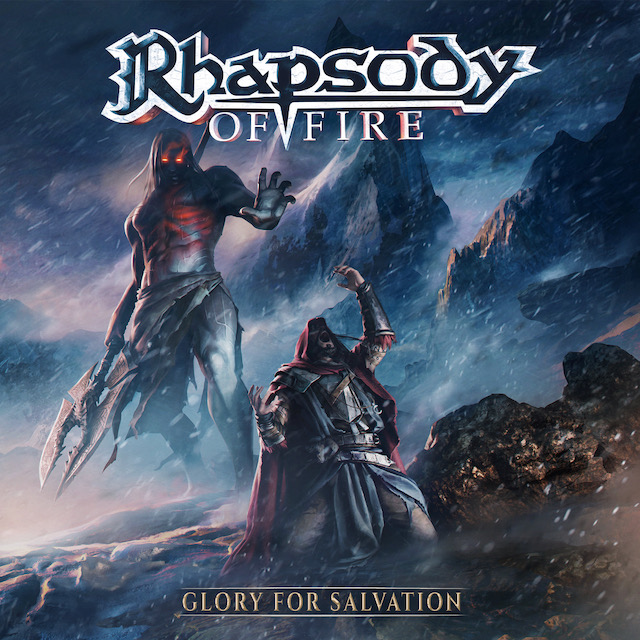 Just to get you caught up, Rhapsody the band have been wielding a power metal sword riding the dragon with their own Italian classy touch since 1997 and the debut Legendary Tales. A name change happened in 2006 adding Of Fire, parting ways with guitarist/co-founder Luca Turilli in 2011, followed by singer Fabio Lione in 2016, and even a another version of the name Luca Turilli's Rhapsody, plus one as Turilli / Lione Rhapsody. Yeah, I know it’s a lot. But there’s more, by 2019 and the album Eighth Mountain enters singer Giacomo Voli joining lone original member Alex Staropoli (keyboards) who wrote the music, and a start of the The Nephilim's Empire Saga. Glory For Salvation is the second chapter.

To the music, Rhapsody of Fire have always embraced the best qualities of the best power metal from the ‘80s and ‘90s and Helloween, early Yngwie Malmsteen, Virgin Steele, Gamma Ray, Stratovarius, Angra, Kamelot, and Blind Guardian. Minus writing partner Turilli, Staropoli has carried on without missing a musical step. “Son Of Vengeance” retains all the elements with glorious keyboards and guitars, charging rhythms, melodies, solos. And how about that voice. Not taking any shots at Lione because he was great, but this change is for the better. Giacomo has all of Fabio’s Italian grace and heart, but with more range. Just listen to his vocal pre-guitar solo where it’s just him and keys, so inspiring. At song two “The Kingdom Of Ice”, Rhapsody think outside the box for the verses holding off on the standard rampaging power metal double bass for the chorus.

The title track, my second favorite, the guitar keyboard combo plays in unison and purposeful for the chorus. But “I’ll Be Your Hero”, damn does it takes the cake for best song on the album and in my top five for the year. Not only is the opening dramatic, but it perfectly sets up the main melody and arrangement. The verses are as infectious and triumphant as the hook, and how that high note Voli hits is. Into year two of the Covid 19 pandemic, and coming out of it, “I’ll Be Your Hero” is the feel good upbeat song we all need.  Elsewhere you get spoken word and woodwinds in “Eternal Snow”/ “Terial The Hawk”, and ten minutes of layered dramatics during “Abyss Of Pain II” with moments of grittier vocals too. Icing on the cake is ballad “Magic Signs” where Voli shines and should be on Broadway.

Easily in my top ten albums for the year.