THUNDERSTICK - Something Wicked This Way Comes 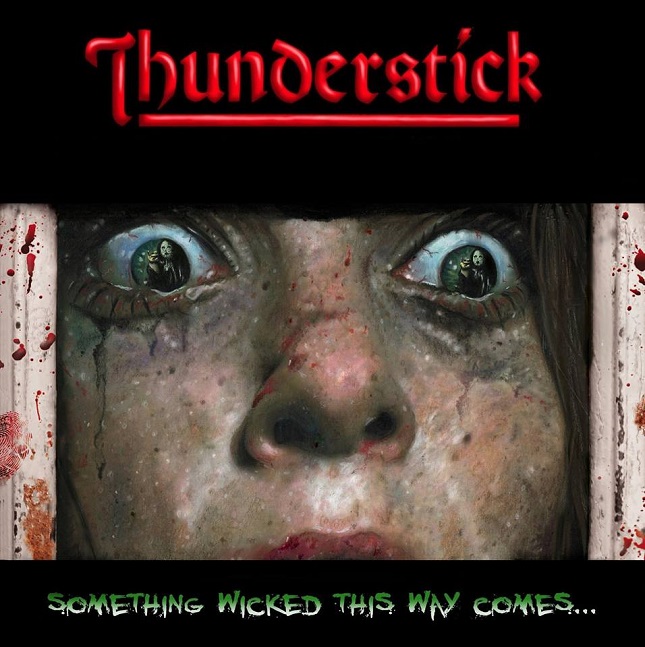 Iconic drummer Thunderstick is back with his first new album in 30 years with Something Wicked This Way Comes. The alter ego of Barry Graham Purkis — former Samson and early Iron Maiden drummer — is giving it another go around with Something Wicked This Way Comes. The album is a mixture of ten unreleased, re-recorded tracks, including three new originals (“Go Sleep With The Enemy (I Dare Ya),” “Encumbrance” and “I Close My Eyes”). Honestly, every track is a winner, which is a rarity these days.

At age 62, Thunderstick doesn’t show many signs of wear and tear as his drumming is solid and consistent, decorated with his trademark thunderous tom fills. However, I do miss that tight snare drum sound he achieved on Samson’s 1980 Head On, but the overall production is damn good. Every track possesses that familiar, vintage NWOBHM sound, most notably similarities to his former band Samson. However, the true gem of Something Wicked This Way Comes has to be vocalist Lucy V, as she knocks it out of the park with her powerful pipes, classic metal vocal phrasing and overall command of each track. The guitars also rock, courtesy of Martin Shellard and Dave Kandy Kilford, while bassist Rex Thunderbolt locks in with Thunderstick creating a solid anchor.

Raucous opener “Dark Night Black Light” gets things off to a great start with its Samson-like shuffling swagger, bouncy rhythm section and an ultra-catchy chorus, while “Don’t Touch I’ll Scream” displays a slower, melodic bluesy flavor. New tracks “Go Sleep With The Enemy (I Dare Ya)” and “Encumbrance” are catchy and head bobbing good. The energetic “Thunder Thunder” was previously released on Origins of Iron, an album of ex-Iron Maiden musicians. “Fly ‘N’ Mighty” is a blatant nod toward Samson’s “Hard Times” while “Lights (Take MeAway)” possesses Maiden-esque harmonies. Closer “I Close My Eyes” is a melodic ballad dedicated to Jodee Valentine, Thunderstick vocalist in the eighties who died last year. It’s an empowering track with a slower tempo compared to the other more raucous tracks, but it proves to be the perfect ending for an absolute cracker of a comeback album from Thunderstick. The replay factor of Something Wicked This Way Comes is enormous, and it’ll have you reaching for the repeat button many times over. Welcome back Thunderstick!