TRAITOR – Exiled To The Surface 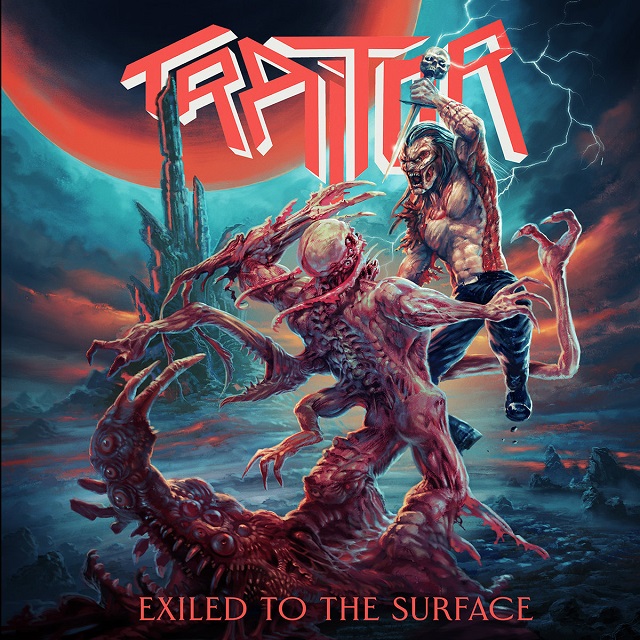 After an atmospheric intro (“Rura Penthe”), the title track to Traitor’s newest opus Exiled To The Surface kicks in with razor sharp guitars and wild drumming. Ah, the sounds of authentic German thrash metal. The band’s fourth full-length album and armed with a steady lineup, Traitor has consistently been churning out material since their inception in 2009.

The production is crisp with emphasis on the guitars and a thick underlying bass. The soloing is clever and on point, just check out the descending scaling on the title track or the melodic theatrics on the burner “Zordrak”. Sodom’s Angelripper provides guest vocals on the accurately titled “Total Thrash”, but the strange and fascinating cover of George Michael’s “Careless Whisper” appears in the middle of the record and the arrangement actually works well in a thrash metal setting. Definitely one to be heard! It’s also different that drummer Andreas Mozer also serves as the band’s vocalist and he charges ahead with Mille Petrozza style vocals – a robust bark filled with anger and chaos.

At 11 tracks and 40 minutes, this is the right amount to digest with this style of music as too much of a good thing can lead to burnout. With a track re-recorded from their 2015 release (“Teutonic Storm”) and several others featured on 2019 compilation Decade Of Revival, the crawling, predatory “Metroid” (Nintendo reference?) which then goes full-out on speed sticks out as a highlight. Thrash is alive and well and Traitor does it an honest and fulfilling way. Give these guys and this album a listen.