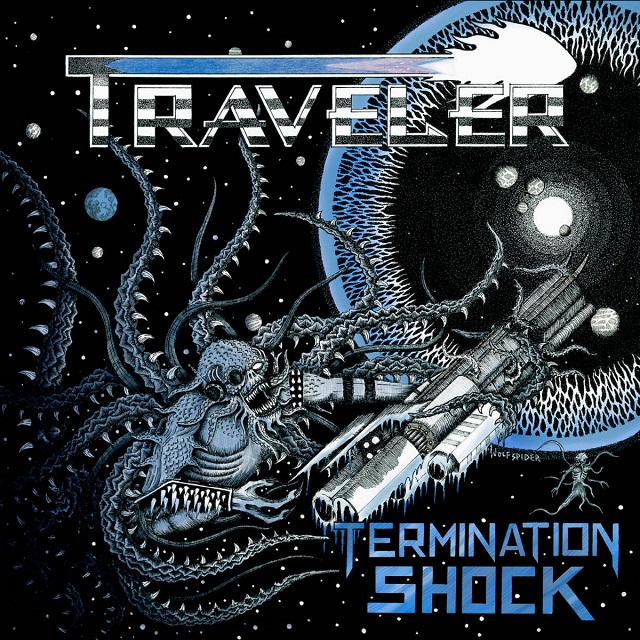 Not one to rest on their laurels, the Canadian speed metal attack Traveler has returned with their second full-length, Termination Shock, just one year after their self-titled debut. With a crisper sound in the production and mix, Traveler again throws a variety of wicked riffs, scintillating tempos, and piercing vocals of Jean-Pierre Abboud. Termination Shock cements them as one of the leaders of this new wave of traditional heavy metal.

An abundance of riffs and flawless drum transitions mark the style of this sci-fi Calgary unit as “Shaded Mirror” makes for one hell of an opener with twin leads showcasing brazen melody and also holds of their strongest choruses they’ve ever conjured up. The adrenaline is at a constant flow as breakneck speed is the foundation of the title track while “Diary Of A Maiden” (so tempted not to write “Madman”) showcases more songwriting depth and fleshing out a strong, melodic lead to round out the track. And is there a sign of sleaze metal in “STK”? The lyrics seem to indicate it as such, but brilliant soloing and perfect guitar transitions elevate this to a sort of sleazy speed metal du jour. Abboud’s charismatic vocals are at the forefront and his similarities to Savatage legend Jon Oliva shine through. More variety from the clan exposes itself in the balladry of “After The Future” which then takes on a more epic direction in the latter half of the cut while “Deepspace” flirts with thrash metal and the ferocious drumming makes this one of their most aggressive bullets to fire. The future of heavy metal is in good hands and this will undoubtedly be on my year end list.