VARGA - Return Of The Metal 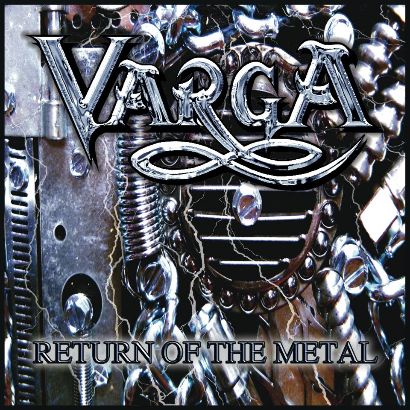 Re-activated Canadian metal band Varga release its fourth full-length album, the follow-up to last October's Enter The Metal, with the sequel, Return Of The Metal. Comprised of members Joe Varga (bass/vocals), Adam Alex (guitar), Sean Williamson (guitar), and Dan Fila (drums), the veteran band (originally formed in 1989) gained prominence with 1994's Prototype, which spawned minor hits, "Freeze Don't Move" and "Greed,” which earned repeat plays on MTV’s Headbanger Ball back in the day. The six tracks that make up Return Of The Metal are all on the longish side. However, every track is so well-constructed with plenty of variation that they don’t lose any of its intrigue factor. The martial arts-inspired “Three Section Staff” is a furious, eight-plus minute metal rager, ending with vocalist Joe Varga’s best Rob Halford impression. The life-pondering lyrics of heavy chugger, “After Life Comes,” is reminiscent of Megadeth. In fact, Varga has the Dave Mustaine sneer down to a T. On “Disfigured Gargoyle,” the band displays the panache of Devin Townsend, the viciousness of Megadeth and the esoteric progressive thrash leanings of Powermad. Even with the cheesy lyrics on “Money Talks,” the song is a thrashing good time, complete with speedy, trade-off guitar leads. The time off the band took from 1998 to last year hasn’t hindered Varga’s songwriting or playing skills in the least. Varga has returned!