A NEW REVENGE – “The Music Business Is Not An Easy Business” 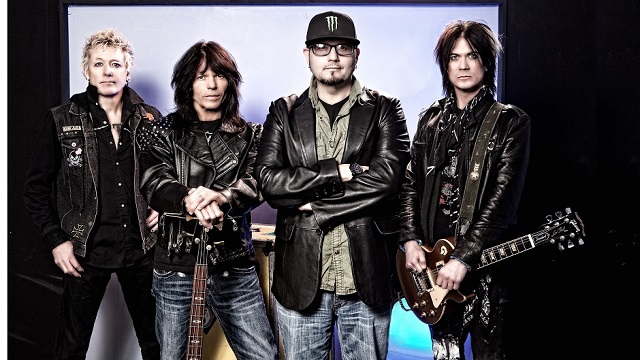 “Yes sir,” exclaims guitarist Keri Kelli. “The reason why we changed the name of the band is because back then it was kind of like a jam band. We would just play songs from our bands that we were associated with – Judas Priest, Ozzy, Scorpions, Alice, etc. But now, it’s been a long time coming but we’ve finally got enough songs together that we’re all proud of and happy with to put a real, original record out. So, we decided to have a name, and not call it a project.”

In fact, it was Keri who coined the moniker, A New Revenge. “I came up with the name about a year or so ago,” recalls Kelli. “For about a month, everybody was emailing back and forth, ‘What about this? What do you think of this?’ Then one day, I don’t know how I came up with it, but I pulled it out of the air. I came up with A New Revenge. I sent it over and Tim wrote back saying, ‘That’s killer!’ And that was it.” 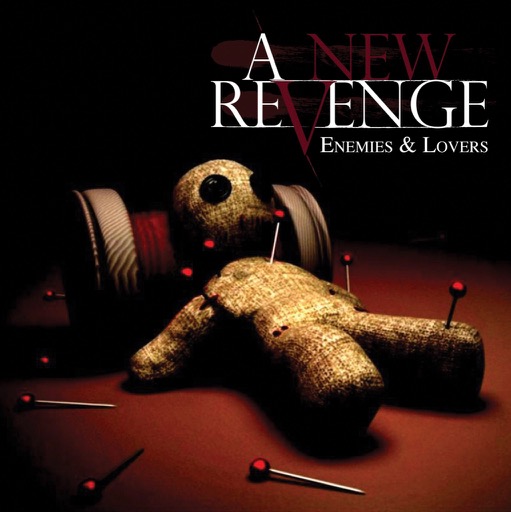 By definition, A New Revenge is a “supergroup.” But supergroup is kind of a dirty word, due to the oft-mismatched expectations vs. reality. Keri shares his thoughts on the classification. “I have never called it a ‘supergroup’ myself. Some people obviously have been using that; I just think it’s a group of guys that are buddies who love playing rock ‘n’ roll. I don’t really buy into all that supergroup thing. Even though there are other bands like this, where you get two or three dudes from different bands coming together; I just see it as buddies having a great time creating some cool music.” Like Chickenfoot, for example. “Yeah, I’ve never thought of it as a supergroup. I always thought of that as Sammy (Hagar) and Joe (Satriani) just hanging out; crank the amps up and have some fun.”

Bassist Rudy Sarzo (Quiet Riot, Dio) is heard on the debut album from A New Revenge, Enemies & Lovers. However, Phil Soussan (Ozzy Osbourne, Billy Idol) can be seen playing bass in the video for “The Way”. Keri explains the change in personnel. “We’re going to continue rolling with our boy Phil Soussan. He’s a great friend, his schedule is a little bit looser than Rudy’s; he’s got a lot going on with The Guess Who, and other things, which is fine. We love Rudy. But Phil is ready to go and on board; he’s an incredible bass player, great dude. We played together in other little projects before. We hope to actually get out and play some shows as well, but it’s all about scheduling and logistics – that’s the name of the game. And it’s hard to carve that time out.”

A further potential roadblock is Tim “Ripper” Owens singing in Spirits Of Fire – another “supergroup” with Chris Caffery (Trans-Siberian Orchestra, Savatage) and Steve DiGiorgio (Death, Testament). Their self-titled debut album was just released in February via Frontiers Music. How will Tim be able to juggle both bands? “Like I said, it’s logistics,” replies Keri. “I don’t have the answer for you, I wish I did. Tim has that going on, and he has The Three Tremors (with Harry Conklin and Sean Peck) that just came out. He also has his solo stuff that he does all the time. He’s a hard worker, he really goes out there and gets it. And, obviously I have Night Ranger. They’re like a machine. Those guys love to play, we have a lot of dates all through the summer. And James (Kottak, drummer), he’s been getting Kingdom Come, his original band, back up and running as well. I think it’s their 30th anniversary this year, so I know he wants to do more dates on that. Everybody’s got to do what they’ve got to do to make a living. The music business is not an easy business, you’ve got to keep pounding away. Like I said, we really hope we can carve some time out, but it would probably be toward the end of the year to get out and play these songs for the people. It is what it is. I’ve been in Night Ranger for over five years now. I can’t shut down Night Ranger with 12 people on the crew, for me to go out and have fun with my buddies. It’s an organization, and people are counting on those gigs for their families as well.” 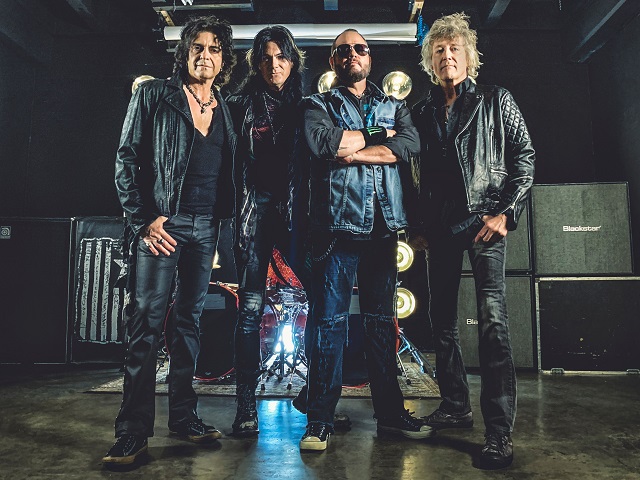 Focusing in on the music that comprises Enemies & Lovers, “Only The Pretty Ones” would be a perfect Alice Cooper song. “Yeah, that song is one of my favourites,” admits Keri. “It’s a very cool tune. It has the eerie keyboard part, then it really builds. It’s kind of like our big, epic ballad in a way. Then Tim comes in with that spooky Alice Cooper-ish voice; obviously it’s influenced by Alice, just the time I had with him, when you’re engulfed in that world. That song’s something that was sitting around, and I developed it and played it for Tim. He thought it was awesome and did a great job on it. I think it shows a different side of the band, that people might not expect when they listen to the record. They hear the name ‘Ripper’ and they think it’s going to be all metal and screaming. It has those elements, but I think there are cooler songs, like ‘Only The Pretty Ones’, that people are going to be very surprised about.”

Those expected elements are in abundance on the first three songs on the album: “The Distance Between”, “The Way”, and “Never Let You Go”. Then, Enemies & Lovers branches out towards the back half, showcasing different elements of A New Revenge. “Exactly. And I think that’s attributed to the fact that we’ve been working on this over X amount of years. We wrote more songs than are on the album. We recorded 12 songs; there’s a couple bonus songs for Japan and other things like that. We would work on little blocks of songs. I would put two or three ideas together in my home studio – guitar riffs, drum loops. Then I’d send them over to Tim, and he’d like song number two. Then he’d mess around with that and send it back. But we took our time in writing little blocks of songs. It wasn’t like, ‘Dude, we need 15 songs real quick!’ Sometimes when you have to write a lot of songs in a short period of time, like six weeks, you’re in the same head space for that month, and the songs kind of sound the same. I think time actually helped us here in getting some cooler, different elements into the songs.”

“Here’s To Us” is a song title that’s been used before. Specifically, by Halestorm in 2012 on their album, The Strange Case Of… Did that raise any flags? “I’ve never heard it. That was actually the first song we ever wrote, back when the project first started five or six years ago. ‘Here’s To Us’ is basically about the hard rock community really rallying around each other, which I think that they do. People that are into hard rock or metal – especially over in Europe, I’ve got to tell ya that – we’re like our own gang. You’re part of this thing in a way, and I think it’s great. ‘Here’s To Us’ is about the hard rock and heavy metal community, and it’s awesome! I really love the up-tempo feel of that song.” 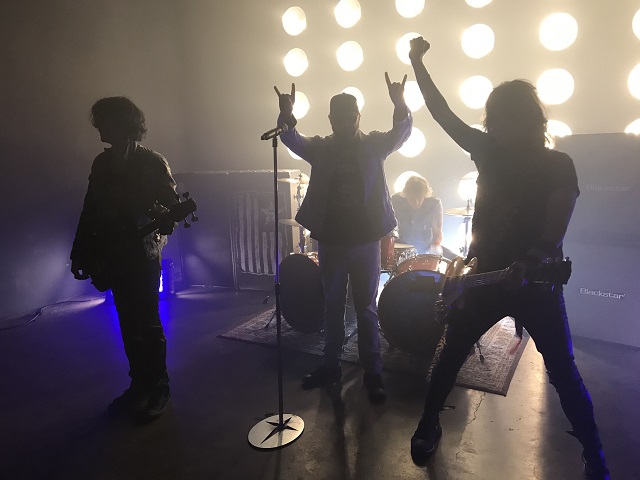 Each of the members of A New Revenge has so many friends in the music industry, it would have been very easy to fill the album with guest appearances. However, that wasn’t the route taken, why is that? “Um… I don’t know? You’re right, obviously we all know a lot of people from being around since the 1800s,” jokes Keri. “But it never crossed my mind for whatever reason. Maybe the next record we’ll do something like that, which I think is interesting. These days, with home studios, you can just send the tracks over to some of your buddies and go, ‘Hey dude, can you play a solo on here?’ They cut the shit right at their house, and it’s done; so, it’s very convenient. But good idea! I’m using that for next time, I’ve written it down – you’ve got the credit.”

It’s nice to hear Keri say, “the next record.” Getting back to that nasty word supergroup, fans often wonder if it’s just a one-off thing, a flash in the pan? But to hear that A New Revenge has their sights set on a sophomore release, when Enemies & Lovers has only just been issued, is certainly reaffirming. “Yeah, I have riffs that we’re already working on for another record. We’re definitely going to do another one cause it’s cool and it’s fun; we’re all buddies and we love to do it.”

Keri is the sole guitar player in A New Revenge. Other bands he’s played in, namely Alice Cooper and Night Ranger, had two guitar players. In closing, Mr. Kelli dissects the one vs. two guitarist’s debate. “To be honest, I like two guitars. I don’t know why we did it just one guitar for this record… it’s just how it came out. Who knows, when we get out and play live, there might be a second guitar player, I don’t know? We haven’t really talked about it. I personally do like two guitars. Most of the bands I’ve been associated with over the years had two guitars. Obviously when I played with Slash, and even back in the old days when I played with Ratt, we had Warren DeMartini and myself. I think it’s cool to be able to play off of each other. You can play some different inversions, different sounds. You can play the harmony leads; that is one element I think is awesome that goes back to Thin Lizzy – one of my favourite bands of all time, one of the coolest rock outfits ever! They really came up with those cool dual guitars, the harmonies, the whole nine yards that have influenced oodles of people, including Iron Maiden. I really love that aspect. On the record, of course there’s different parts and harmonies, and all that kind of stuff. I think it is sonically better with two guitars. So, maybe when we play live, there might be a second guy there with me, we’ll see.”