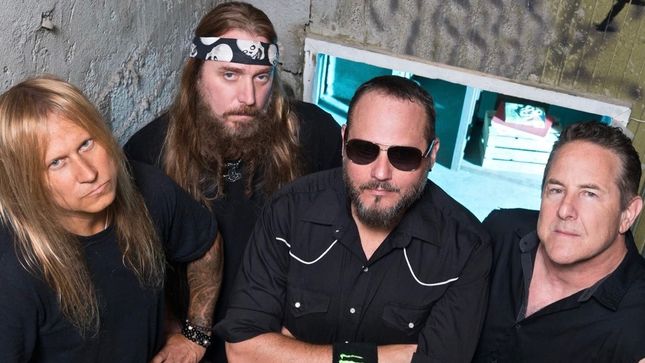 Don’t tell Chris Caffery that Spirits Of Fire is a “supergroup”. The new “project”, as the guitarist would like to deem this tribe, is a full-throttle metal unit featuring Tim "Ripper" Owens (ex-Judas Priest, Iced Earth), Caffery (Savatage, Trans-Siberian Orchestra), Steve DiGiorgio (Testament, Death) and Mark Zonder (ex-Fates Warning, Warlord) and their self-titled debut is out now on Frontiers Records and is something no self-respecting metalhead will want to miss.

The ever personable Caffery is excited about this new project and working with these musicians plus producer Roy Z (Tribe Of Gypsies, Bruce Dickinson) and it was akin to playing baseball with a bunch of all-star players. “I’ve been friends with Tim for over 20 years so he's somebody that I always wanted to do a record with, so having this put together with something that really like killed two birds with one stone with that and I was a huge fan of Roy Z’s work and never had a chance to work with him and just to be able to get a rhythm section like Steve and Mark in the same package deal, I felt like I got a lot of great players on my team and you know between the label and everything else, it’s a really special thing for me.”

Frontiers Records has had a habit of brainstorming new bands featuring well-known musicians, like Nordic Union, Dream Child, Sweet & Lynch, Rated X, and so on and so forth. Frontiers approached Caffery with the idea of this new band.

“The Frontiers people, they're great fans of music and that's what builds all these things,” explains Caffery. All these things that people see from all these bands are coming because that label are fans of these bands and not just out there trying to make money. They're out there trying to make music and develop bands and put these things together. I mean, in the past, in the ‘70s, late ‘60s, even until the end of the ‘80s when the labels were going out and using A&R to search bands and put money into their careers and the recordings, I mean that was something that was just a part of the industry on a daily basis. It isn't anymore. So I mean, Frontiers is creating the ability kind of in a different direction to make that happen. Whereas, you know, instead of finding the band, they're kind of making the bands a lot of times with that. But it's something that's fun and it's given us as the artists, a chance to go out there and have that energy for the first time and then doing these projects. And that's why I said the word the project then, because that's what it is.”

Most of the album’s writing fell on his shoulders along with Roy Z. Out of the 11 songs, Caffery had a hand in eight of them and it was a lot of fun doing it. “It was kind of reminding me when I was doing Dr. Butcher with Jon (Oliva), because metal music is fun for me to write and I’m a little bit better as far as putting together things that are not only easy to play and sing, but just more fun.”

And writing songs for a vocalist as strong and talented as The Ripper made it even more satisfying and he didn’t have to worry about making things difficult for him. “He can sing anything!” the blonde-maned guitarist enthuses. “Not for one second did I ever go ‘oh, I got to write something that this guy can sing. I was just like, this guy is going to be able to sing whatever he wants here and to do whatever he wants. So it was very exciting to hear him when everything was finished. And I mean that was the cool thing about this, when you finally got that master of that record and you stuck it in your car stereo because that's usually where I like to listen to things first is just drive around and listen to it that way. It was really fun to hear the music that way.”

And make no bones about it, this is a heavy metal record that lets it fly and you can hear influences of the each of the bands these are or were in. Caffery explains the thought process and says, “There was a mentality of trying to have some of that element of things from all those bands in it. But I as a metal fan wanted to write something I thought would be attractive in that sense to everybody else as well. I mean there's some elements in there that go a little bit progressive, but that's just part of putting in some different rifts and things combined in with the drumming style that Mark has. It just kind of made that stuff climb out in that direction a little bit more. I mean he kind of brought that element in by taking something that might've had a little bit different and straighter of a by a different drummer. So it's great to hear everybody's influencing the music too and not just who wrote the riffs but who's written their own parts into it and became part of the finished record.”

The band name Spirits Of Fire was taken from one of the song titles from the album and it felt like the best fit for a moniker. The name was one of the last things they figured out. Caffery laughs as he reveals, “The Frontiers people were like ‘well, what do you want to call this’ and I’m like ‘Supergroup’!” He chuckles before continuing, “They said, ‘well what we do a lot of the times is we use the name of a song as it and I was like looking at the song names and I didn’t really see us being called ‘A Game’, but I thought the only song that was really going to work was going to be ‘Spirits Of Fire’. It's a really positive name too, because the fire spirits are like the most positive of all the spirits out there. When that word was developed, it was the spirits of fire that were the ones that were called to go against the evil spirits, that the most powerful, evil spirits are the ones that would defeat him. So it's a really positive name in that sense. I was really, really happy about that one. I like the fact that we got our little metal monster on it because growing up as a (Iron) Maiden fan that was cool.”

While it was hard for the axman to pinpoint any particular tracks as standouts, he’s attracted to the first half of the album. “I do really like ‘Temple Of The Soul’ and ‘Spirits Of Fire’,” he admits. I like the whole record, but maybe those first four songs are my favorites.”

Now when it comes to the prospect of playing shows and touring, that’s where the schematics become difficult due to everyone’s other commitments and schedules. “Ripper’s got a lot of stuff going on this summer”, Caffery divulges, “with the whole Dio Hologram thing and we had a couple offers for some festivals, but I’m going to probably try to reroute any of that to 2020 and just steal away people’s dates now so I can be the one that they can turn around and say they can’t play it because this is doing it; so that’ll be my goal, to become the dates dealer (laughs).”

The flames of the fire keep burning too as record number two is already being planned and written. “I’m already working on writing album number two,” he reveals. “Everybody’s schedules are all in different spots and you’ve got to get everyone together. I would like a chance though to get together with Steve and Mark and try to plan out and write some stuff with them. It will definitely add an element into record number two.”

With the Savatage album Gutter Ballet hitting 30 this year, I had to prod Caffery’s brain about that time period and that record. Caffery actually didn’t play a thing on that album, but he’s featured in the linear notes as a full-fledged member of the band. 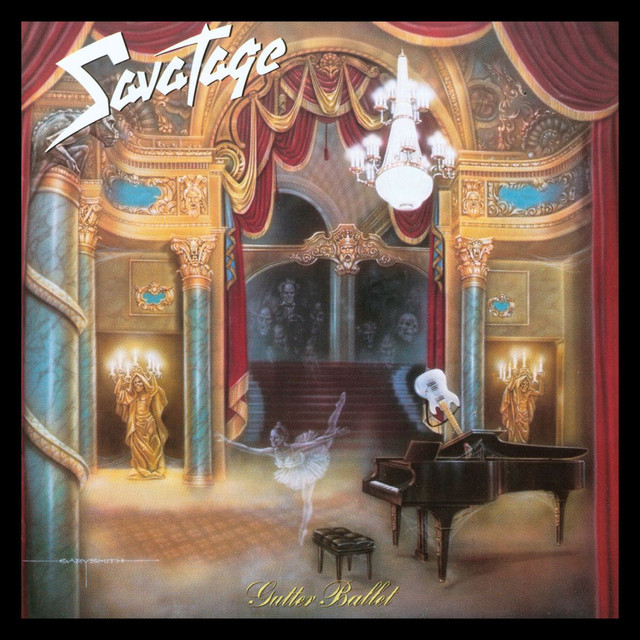 The guitarist has many fond memories of that time and takes us into a time machine back to ’88-’89 and reflects, “Well that was a really special time for me. I mean the one thing that a lot of people don't actually realize about that is at the time I left Savatage at the end Mountain King Tour between that and the end of the Gutter Ballet recording, I was working on a few different things for bands at Atlantic Records and one of them was the band Dirty Looks and I was actually in the studio recording that band and I wrote four songs and recorded all the basic rhythm tracks on their second record Turn Of The Screw. I was working and recording that, but I just did not get along in a lot of different ways with that vocalist (Henrik Ostergaard) and I wound up leaving that band and going back to Savatage and when the Oliva brothers (Jon and Criss) called me up during the recording of Gutter Ballet, almost every song on that record was already done, so they wanted to meet with me there in New York City and we went onto the roof of the Record Plant Studio and Criss was the one that was talking. Jon was there and he was so funny with this quote, he was like, ‘Even though we think you’re a dick, we want you to join the band.’ It’s just funny because the Oliva guys are like my brothers, so I went and joined them. And Criss that point in time was like ‘You know, we got all this stuff done, but if you want to spend time and go learn all the songs and come in and do a track on everything, you can do it. And at that point in time I was just like, ‘No, you've already played it. Just tell everybody I'm in the band.’ I mean, I spent a lot of time working on the Dirty Looks records and never got any credit.”

Caffery laughs and continues, “That Gutter Ballet record was very special for Savatage. I mean, it was also the first time, you know, that really the, the piano was introduced into metal that way almost with any band and you say that, you know, Queen and even though some of the (Black) Sabbath records there was some piano in there, but Jon was really like the first metal person to be singing the way Freddie Mercury or John Lennon did with a piano. So that was a very influential time. And if you look at those videos, you know, Paul (O’Neill) was envisioning the battle between the rock band and the orchestra and actually when he recorded ‘Prelude To Madness” before the ‘Hall Of The Mountain King’ song on that record, that whole song structure of the Greek mountain king was going from guitar to strings. So the stuff that Bob Kinkle (session musician who played keyboard on the album) was playing on the keyboards with that was a guitar battling an orchestra. That whole guitar and orchestra thing that happened with Trans-Siberian Orchestra was something Paul O’Neill had in his mind back then! He was always talking about putting together a band that had an unlimited level, creatively could do anything, whether it was classical or rock or jazz or metal or whatever you wanted the band to do. And he was talking about putting it in the theaters and morphing it as more of a rock theater element and then still putting it into the arenas. And so that whole structure was something that was in Paul's mind.”