EXCITER - Back For The Attack! 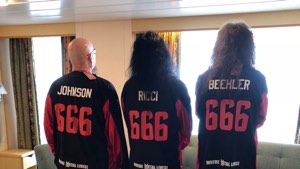 Plenty of water has flowed wildly in the Ottawa River since Canada’s legendary three-piece Exciter headlined over the likes of Megadeth and nearly Metallica in the early ‘80s. This was the era where there was a Big 3 (Exciter, Anvil and Razor), before there was the justifiably hyped Big 4 (Metallica, Slayer, Megadeth and Anthrax). At the time, Canada had another famous trio that took heavy metal to another level of headbanging prowess. Heavy Metal Maniac (1983), Violence & Force (1984) and Long Live The Loud (1985), being the perfect trifecta of speed metal majesty, when the likes of Motörhead, Judas Priest and Accept began to push the envelope of velocity.

The original Exciter lineup - singer/drummer Dan Beehler, guitarist John Ricci and bassist Allan Johnson - reunited in 2014 and played their first European show at Germany’s Keep It True Festival the following year which ignited the hellfire once again. Earlier this year the band triumphed once again on 70000 Tons Of Metal and live Exciter still crushed the crowds on the Caribbean Seas. 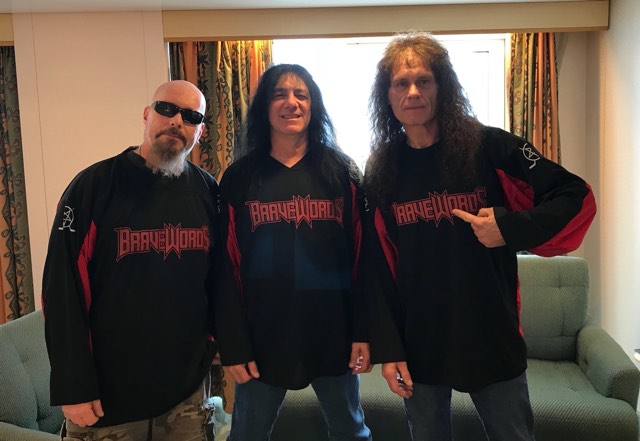 But the burning question is new material, which is currently being finalized now, with two members in their 50s and one in their 60s!

BraveWords caught up with all three members recently for the ultimate session about Exciter pounding metal in the past, present and future.

BraveWords: So, who really lit the spark with this reunion? Where did those conversations begin?

Johnson: “For me is was Dan. We’re in touch. John had the other Exciter going and you know, they were doing great and everything. Dan came to me talking about approaching John for a reunion and I kept telling Dan there’s no way he’s going to do it. He’s loyal to his band mates, he’s not just going to say “see you later guys, I’m going to do the original Exciter” but then, change of events happened and here we are. I don’t know exactly what happened with the whole break up and the other lineup…”

BraveWords: Is that an uncomfortable situation?

Ricci: “I had no idea that Dan had any interest in playing with me because after the other band dissolved. I just needed some time off and I didn’t want to think about music. I didn’t want to deal with musicians, I was super stressed. And then Al approached me and said let’s get back together and I said ‘Ah, another decision to make’.”

BraveWords: Life is full of ‘em!

Ricci: “I was looking forward to 12 months of just doing nothing, just do my hobbies and just take care of my family and whatever, you know? Then it was like, oh (sigh) I’m going to get right back into music and practice...but deep in my heart I said ‘yes I have to do this.’”

BraveWords: And how long did that decision take?

Beehler: “First he said I don’t know, it might take a year!” 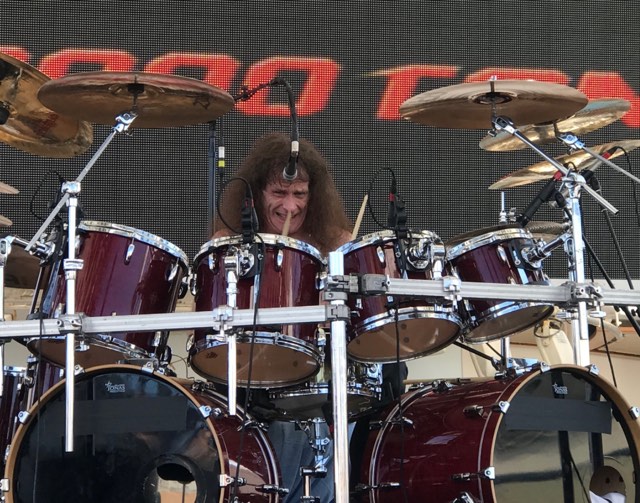 Ricci: “Well, it’s like Dan said earlier - actually we were talking earlier about it - it’s like we never stopped playing. It was like the next rehearsal but 25 years later. Because we played the songs perfect, it was tight, everything was perfect! No sloppiness, nothing. And we all laughed after we played that first song.”

Beehler: “It just felt so right, you know? We played together for so long and the chemistry, it worked.”

BraveWords: But you guys are so humble. I have to relate it to when Malcolm Young died. Here’s a guy that literally taught almost everyone that we listen to how to play guitar with those basic AC/DC riffs, and I’m thinking about Exciter, Anvil, Razor. You taught a generation this whole speed metal phenomenon. You walked the walk, and you guys were one of the key pieces of the puzzle back then. So where did the need for speed come from?

Beehler: “The New Wave of British Heavy Metal. Guaranteed. We just took it to, not the level that Metallica did a little bit after us, but we took that to another speed level. And I think that’s where the speed came in. It was from being influenced by Saxon’s “20,000 Ft.” and “Heavy Metal Thunder”, Priest - the song “Exciter”. Motörhead’s  No Sleep till Hammersmith. The whole New Wave of British Heavy Metal, and we just pretty much took that to the next level speed-wise, but we always kept our mid and Sabbath-y tempos because Sabbath was a huge influence.”

BraveWords:  But we had the Big 3 before the Big 4 - that's pretty hefty history on your resume. Do you think of yourselves as part of that club?

BraveWords: You were one of the first.

Beehler: “Well, people forget that when Metallica was recording Kill 'Em All we were recording Violence & Force, so we were second album in. We took Megadeth on their first US tour as an opening act, and Combat Records said to me, ‘Take care of these guys, take them under your wing, man, you know, they're young. I said, ‘Oh, no problem, you know?’ It was a different world.”

BraveWords: Any stories about hanging out with Mustaine?

Beehler: “Mustaine? Oh lots of stories, man! How much time you got?  He was great. And we treated them so well - any opening act - which didn't always happen back then. Anybody that played with us, we pretty much gave them whatever the hell they wanted. All these years later, John was talking to Dave a few years ago, and he still really appreciates that, he never forgot that.” 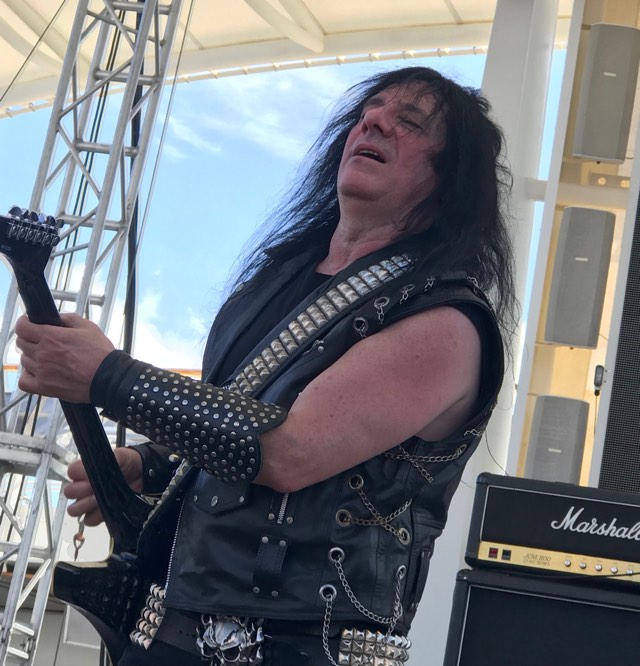 Ricci: “On that tour we had two vehicles. We had an air-conditioned Winnebago that we travelled in, and we had a five-ton truck for our back line because we drove from Ottawa to Los Angeles to start the tour with Megadeth. The Megadeth guys were travelling in a station wagon - they were taking turns driving, that's how they were getting from city to city across the US. And so, one of the Megadeth guys says, maybe Dave Mustaine - I forget who asked me - if they can put their back line in the five-ton. And we said we got lots of room. They said ‘Oh really. man?  That's so cool of you.’ Then when we were travelling across the US, we asked them - because they had no air conditioning in their station wagon - why don't you guys take turns riding with us in our air conditioned Winnebago, with beer, and a kitchen - so they alternated. Mustaine would be on with us, then Dave Ellefson, then Garth - they would take turns going from city to city. Then, during the sound check - you know, if things weren't right, Dave wasn't happy - we'd be sitting there in the venue listening to their sound check for like an hour, hour and a half, eh? And we wouldn't be bitching at them.”

BraveWords: For a 20 minute setlist.

Ricci: “They said, ‘No one would ever treat us like you guys treat us.’ It's 'cause we're all in this together - we're like brothers, you know what I mean? We're all trying to achieve the same thing. So why should we pull a big heavy attitude on these guys, we're all trying to get somewhere together, you know? It was a really cool time.”

BraveWords: So, I hear the creative juices are flowing.

BraveWords: So how many songs are written?

Beehler: “We're about six or seven into it. Doing some pre-production, and we're being picky you know - there's a lot of pressure.”

BraveWords: From people like me. Don't fuck it up! Because everyone's paying attention - this is a big reunion record. Huge.

Beehler: “We gotta do it right. But we're happy with the stuff so far.”

BraveWords: Who will produce?

Beehler: “We have a guy who used to work for the band as our sound man who has a mastering studio, and he stood in front of the band for many years, so he gets it.  So we're gonna do it with him. Heavy Metal Maniac was recorded with our sound man, so there's a bit of familiarity there.”

BraveWords: Now, will you try to - mimic is the wrong word - implement those same classic tones? The Exciter signature trademark?

Beehler: “Oh definitely. We're going in that direction. Completely right back to '82, '84.” 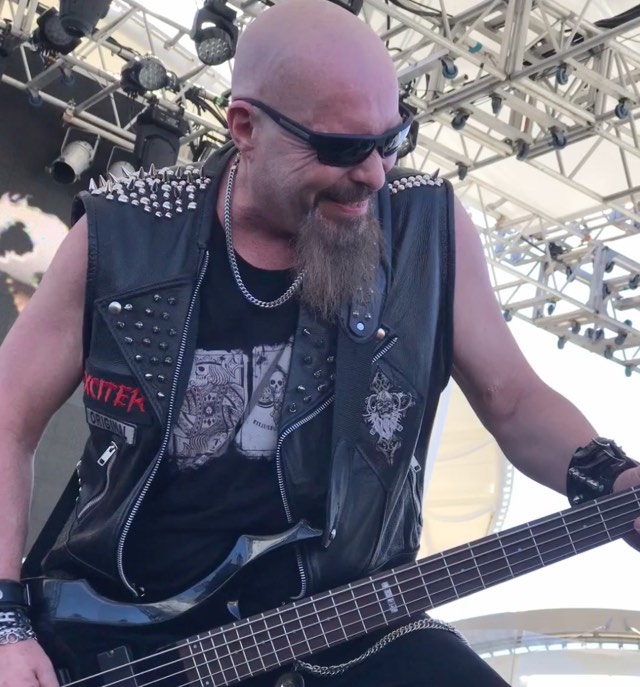 BraveWords: Do you think about the recording processes back then, and then currently? Some people still want to use tape for example.

Beehler: “We'd love to do analog if we could. Actually, we were talking about doing the basic tracks analog and then bouncing it, but we'll see what happens there. In the old days, everything was right off of the floor. And we rehearsed so frigging much, we'd usually do it in first or second take, no matter what album. And then through the ’90's, albums were all pieced together and shit. We won't be doing any of that, that's for sure. It's definitely going to be a live feel.”

Ricci: “You know, it's very hard to get ahead in this kind of music. You're here one day and gone the next. Doesn't matter how talented you are, doesn't matter what great drummer or guitar player or bass player you are - that doesn't matter. It's the songs that matter. Playing a hundred million guitar notes, riffs - fine, but it's not saying anything. We always take that approach when we're writing music - the song has to be good. Doesn't matter what we have to do to make it good. We're on Massacre and we're going to just have to go through with it.”

Beehler: “Plus, there's no real money in music now anyway. I mean, it's not like you're going to sell a million CDs.”

BraveWords: What are your timelines in terms of getting this thing done? By the end of the year, you think?

Beehler: “Oh, it'll be next year as far as having it done.”