NIGHTWISH – A Four Year Fantasy On The Open Road 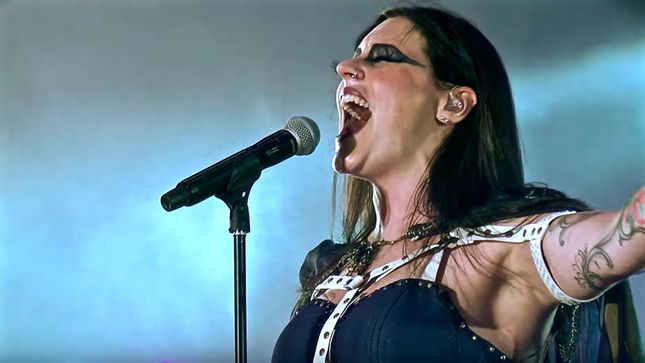 On the one hand, big budget live DVDs seem like a pointless investment now that YouTube is king. Then again, with hundreds of hours of bootleg footage online showcasing or plaguing a band until the end of time once uploaded, there's an artistic need for an artist to present their work in the best possible light. Nightwish started releasing live DVD material long before online video sharing became the entity it is today, issuing material in three year cycles (approximately) to capture each chapter on their journey to greatness. Folks paying attention to that particular aspect of the Nightwish catalogue, therefore, weren't surprised when news came down that the band was releasing Vehicle Of Spirit to commemorate their Endless Forms Most Beautiful world tour. Just how necessary it is can be debated, particularly since the Showtime, Storytime DVD from 2013 - shot at the Wacken Open Air in Germany - is a very hard act to follow if you're a fan of live retrospectives. It's doubtful the diehard fans are complaining, however, with shows from 2015 shot in Tampere, Finland and London, England featured along with live clips from around the world.

"We started planning the Vehicle Of Spirit DVD as we planned the tour for Endless Forms Most Beautiful," says vocalist Floor Jansen. "We knew that we didn't just want to document one concert, but rather to show more faces of Nightwish on tour around the world. We have a varied setlist, we play different sizes of stages - in Germany, for example, it's massive, and in the US things are much smaller - and a show in China looks different from a show in Finland. We wanted to document the world tour, and as the planning of the show evolved we chose the London show at Wembley because it was the biggest and very special. This was definitely something that was planned from the beginning."

Jansen reveals that although keyboardist/founder Tuomas Holopainen is captain of the ship, the band contributed as a whole to how the package was assembled.

"In every constellation of people working together someone has to take the lead, and obviously that's Tuomas in Nightwish, but he doesn't do it in a way where there's no space for anybody else. The DVD was definitely a band effort led by Tuomas." 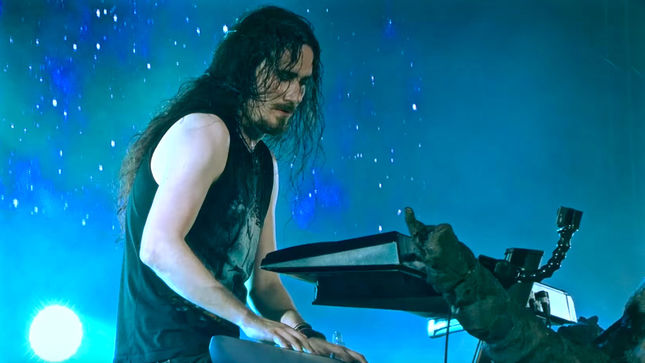 Showtime, Storytime was documented proof that Jansen was capable of singing anything in the Nightwish catalogue, while adding her own identity to the songs. Vehicle Of Spirit cements her rightful place fronting the band as they dig deeper into the classic (former vocalist) Tarja Turunen cuts ("Stargazers", "Ever Dream", "Ghost Love Score"), Jansen breathing new life into (other former vocalist) Anette Olzon's songs, and presenting her own work from Endless Forms Most Beautiful in a live setting.

"Thank you. This gave me the chance to show I can do the old stuff, but this is also how it sounds when you give me a rough diamond, so to speak, because some of those songs in the set had never been sung by anyone else before." 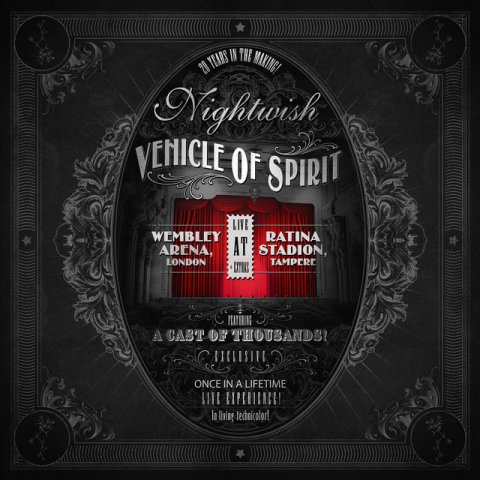 That said, does Vehicle Of Spirit have more sentimental value on a personal level compared to Showtime, Storytime?

"I wouldn't say more, I'd say different because Showtime, Storytime is a very special thing," says Jansen. "Without the guys knowing it, when they decided to document that tour they had no idea it was going to take such a radical course, and that became the lead subject of the whole behind-the-scenes story. The live show became a real introduction to the world of me as part of the band, so in that sense it's kind of hard to top. You can never introduce your singer twice (laughs). However, everything that happened on the Endless Forms Most Beautiful tour, and now the DVD, is special because it was the first Nightwish tour where I was there from the very beginning and part of the album we were promoting. In that sense it's absolutely special and a more complete image of where we are today. The next step, in a way."

Looking back on Jansen's unexpected entrance into the world of Nightwish, which began with the on tour firing of Anette Olzon in 2012, it's a rather incredible as a full story. You can't make this stuff up.

"(Laughs) It's not like I could lay out plans up front for what happened. You can have ambition and a dream, and I pursued mine. If I look back on just the four years I've been in Nightwish, so much has changed; where I live, how I spend my time, getting ready to have a baby.... a lot has changed, and for the better. If somebody had told me five years ago 'Hey, in five years you'll be living in Sweden, you'll be pregnant, you're getting married, and you'll be in Nightwish...' I would have said 'I don't think so...' (laughs)." 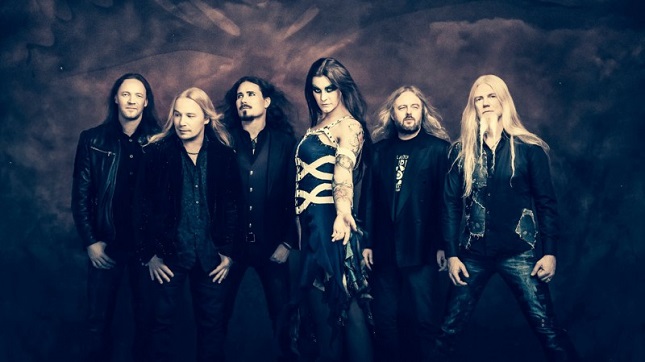 An amazing turn of events when you consider that After Forever, the band that gave Jansen a name on the metal scene, fell apart only two years after they seemed to finally be getting somewhere with the release of their self-titled fifth album in 2007. It was only a short three year gap between Jansen's world crumbling around her and winning the lottery.

"It didn't feel like all of a sudden to me but I'm glad I kept my metal wings on, if you know what I mean," she says. "The end of After Forever came at a point in my life where I wasn't sure if I should continue in this genre. And, being a professional musician is not easy. I know from experience just how long it takes to really build something up. But, my heart lies here so I really didn't have a choice but to follow the course I took."

It's fair to assume that the 12 years Jansen spent building After Forever up from nothing made the overall Nightwish experience easier to grasp even though the band is on a much higher level across the board.

"Absolutely, and not just the After Forever experience," Jansen agrees. "Setting up ReVamp (in 2009) and everything else that happened, including the not so good stuff, was absolutely necessary to making me become strong enough to do this without feeling like I'm walking on my tiptoes and about to fall. You need that experience if you come into a band on this level."

As an aside, Jansen added to her experience as an artist by contributing vocals to the new Evergrey album, The Storm Within, on the song "In Orbit" which has since been released as a single. It was an arrangement that had nothing to do with her Nightwish notoriety.

"Doing 'In Orbit' was a case of friends working together because I have this history of liking the band so much," says Jansen. "That brought something really special in because I could sing with a band that I’ve always listened to. Hannes (Van Dahl / fiancé, Sabaton drummer) also told me that I’m the first guest singer on an Evergrey album that’s not a member of the Englund family (laughs). It’s always been Tom’s (Englund) wife that has sung on the Evergrey albums, and now his daughter as well, so that’s pretty damn cool. It’s an honour to be able to do that. The whole thing about ‘Who is in the biggest band?’ doesn’t really matter. Of course it helps Evergrey if they’re connected to a name like Nightwish, but at the end of the day it’s just Tom and me making music and that’s super cool. It’s very important for me to keep making music regardless of how 'big' my name is or how much exposure I’ll get; it should be fun to make music. If you can’t make music without enjoying what you’re doing, you shouldn’t bother.”

Getting back to Vehicle Of Spirit, it's her chance to experience the bombastic spectacle that is Nightwish on a live stage as the fans see it. Or maybe not...

"(Laughs) I will always look at myself and the band differently from everyone else, so I don't know if it's possible to be objective about it. You go through your own personal list of 'Yeah, that was good, that wasn't so good, I should have done this instead of that, and what's with my make-up?' (laughs). I'll always look at the show differently and also very critically. I think you know me well enough to know that I'm a perfectionist, and I'm in a band with perfectionists, so it's very nice feeling after I've been over that first checklist I can say 'Yes, this is good, this is great, we pulled it off.' I think it's important when you make a live DVD to be able to do that in the end." 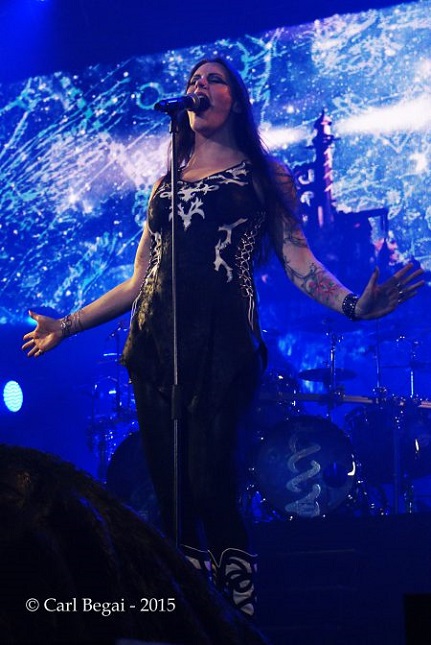