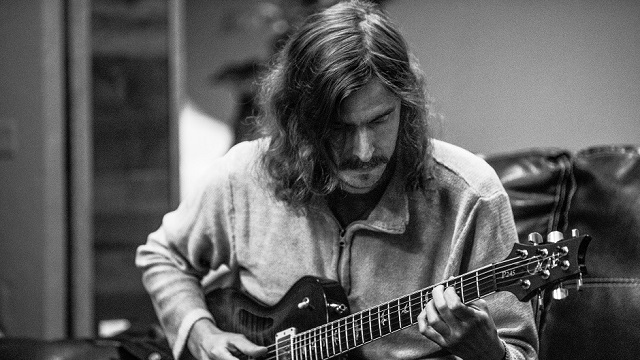 On May 18th, BraveWords attended a listening session for Opeth's new album, In Cauda Venenum, with a group of journalists from across Europe. We gathered in the sleepy German town of Donzdorf, the home of Nuclear Blast's head office, where frontman Mikael Åkerfeldt hosted the session and presented one of - if not the biggest - Opeth production to date. It was revealed prior to the first listen that the lyrics for In Cauda Venenum were originally written and recorded in Swedish (Åkerfeldt's mother tongue), and that Swedish and English versions of the album will be released at the same time. Both versions were presented on this particular evening, the Swedish getting the full surround-sound blow-the-roof-off treatment, the English playing in the background while we waited for our one-on-one interviews with Åkerfeldt.

In the interest of saving longtime Opeth fans precious time and energy, the answer is no, there are no death metal growls on the new album. Not a single one. So, if the idea of the band going full-on '70 progressive with rich, clean vocals (yet again) performed by Åkerfeldt is not your cup of tea, it's best that you stop reading and carry on with your day elsewhere.

BraveWords: The first thing that struck me about the album was the Pink Floyd-ian sound, or feel. I got it from the intro track ("Livets Trädgård" / "Garden Of Earthly Delights"), and especially on "Svekets Prins" / "Dignity".

Mikael: "I think, at times, Pink Floyd is an obvious reference people will pick up on. There are some things on the album that I think the people today missed which I thought were obvious, but I guess it takes more than one listen."

BraveWords: The lead guitar tones on the album are amazing. Very warm, very big if that makes sense, and I hate to use the cliché, but very organic.

Mikael: "It's not me doing that, it's Fredrik (Åkesson). Somebody said to Chuck Berry once, 'That guitar sounds real nice,' and he said 'It's not the guitar...' and that's really true about playing guitar. Fredrik is fucking amazing. He's a metal guy, but very sensitive and open to the moods of a song, so I've never had to stop him. Okay, maybe sometimes if he was playing something too fast and I wanted more feel, but he understands this right away. And his tone... when I was mixing this album I texted him and told him he was the best guitarist in the world (laughs). I pushed him on this album, and I like to think I had a hand in his development as a guitar player even if he was amazing before he joined us." 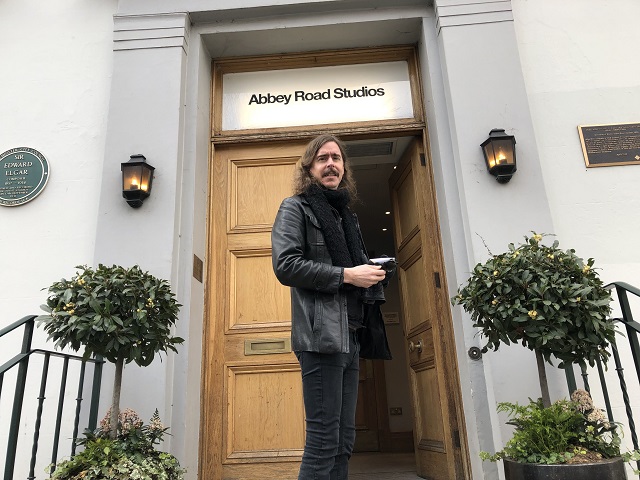 BraveWords: Opeth and long, intricate song arrangements are nothing new, but there are some songs on this album where the hooks aren't readily apparent ("Hjärtat Vet Vad Handen Gör" / "Heart In Hand"). You need to listen to them a few times to get where they're going. You wrote the songs and produced the album, but did you have to "sell" the songs to your bandmates? They had to be on the same page as you to pull this off.

Mikael: "This line-up has been playing together for a while. (Martin) Méndez (bass) has been in the band since the late '90s so he knows me, and he stopped me once on a record. I had written an hour's worth of music and he said 'No, this is not what you should do, not what we should do,' and we ended up doing something else. Ultimately, I think they put some trust in me, first, to come up with good material - that's the most important thing. It doesn't have to be super progressive or anything as long as it's good. And then they trust me to push not just my songwriting but our music, the special thing that makes us Opeth. They expect me to experiment and advance. Just because we have a sound or a heritage - no pun intended (laughs) - it doesn't mean that we should stay in that comfort zone. For me it's more interesting when you push yourself out of that comfort zone. When I play stuff to them it's already finished. I don't play excerpts or anything. I play the songs in order because I want the guys in the band to really feel what I'm doing."

BraveWords: A lot of fans still aren't happy about the idea of Opeth without the death vocals. I can only imagine people hearing this album saying "What are you doing? Why are you doing this?" if they weren't into the last few records.

Mikael: "I had that a lot... and to my face sometimes from drunk people (laughs)."

BraveWords: If I look back to Damnation (2003), even though it was all about clean vocals (the band's first time using them exclusively) it was still cold and dark, maybe even tentative, like you were unsure of yourself. Now, like the guitar tones on this album, the vocals are big and warm. Maybe that's a production thing as much as an "Åkerfeldt the singer" thing. Were the vocals a stretch or an experiment in some way?

Mikael: "Well, I didn't want to be a vocalist, ever. It's just that nobody else wanted to do it either..."

BraveWords: But now you don't sound like you don't want to be the vocalist.

Mikael: "I don't have any training and I don't consider myself a vocalist. I can stretch things and say I'm a musician. But, I have my preferences and those guys and girls I like are top singers, and I know what I like to hear. I have to kind of suss out in my own voice what I don't like, what I want to get rid of from my own pipes, and what I should put emphasis on. I found that stepping outside of the comfort zone and singing beyond my abilities makes things sound good. There is a type of frustration that comes out, and it's actually true frustration (laughs). Sometimes I try to hit a note that I simply cannot get, so I developed a falsetto that you hear a lot on this album. Somebody today actually thought we have a female singer on the album, but no, that's me (laughs)."

BraveWords: Which is why I asked you "'70s much?" when I sat down for this interview.

Mikael: "We latched onto that. Over time we've gone through the sounds of those particular times. With Orchid (1995), that was the sound of the time. We were completely inexperienced and we trusted what people told us about what sounded great. But, after a while you become more confident and you realize what people are telling you is all bullshit. Even people I respect said things to me that weren't true. Orchid didn't sound good after mastering (laughs). So, you really have to trust your own instincts. And as you know, I'm all into that scene from the '60s and '70s and into the '90s, so we end up with a mish-mash of everything. Generally, my favourite era for the sound is the '70s and early '80s." 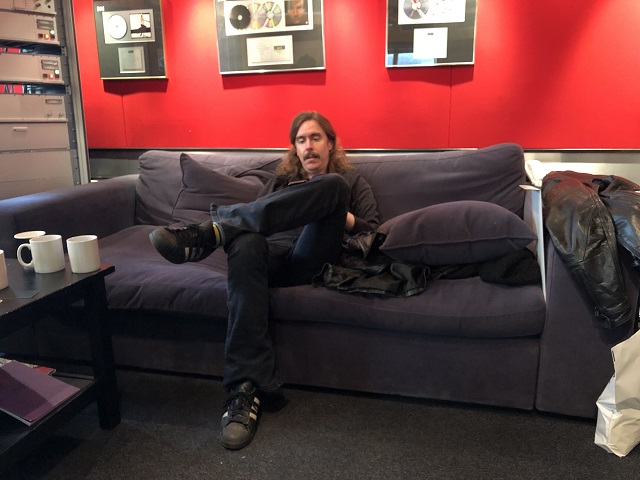 BraveWords: Ultimately, In Cauda Venenum sounds like a big version of a '70s album. That sound, those kinds of prog rock songs with today's production values. The last two songs especially - "Kontinuerlig Drift" / "Continuum" and "Allting Tar Slut" / "All Things Will Pass" - really drive that '70s prog sound home. And "Minnets Yta" / "Lovelorn Crime" reminded me of latter year albums from The Beatles...

Mikael: "There wasn't a retro button or anything. There is less distortion on the guitars because we made a choice after Watershed (2008). Back then we recorded and tracked four rhythm guitars, and since then we've stripped things down to two guitars. So now you hear the human behind the music rather than the wall of sound, which is more important to me."

BraveWords: It doesn't sound retro at all.

Mikael: "I take that as a compliment. That means a lot. When you guys came in I was pacing the room. Not because I was nervous but because I was excited. And I wanted everything to work and present the album in a good way."

BraveWords: I liked the gentle fade of "Allting Tar Slut" / "All Things Will Pass" to end the album. I also think it added to the whole '70s vibe of the record.

Mikael: "One guy today said 'The only thing I didn't like was the fade out.' And I asked him how he would have done it because I couldn't find a way to stop the song. That's one of those riffs that makes the song an evocative piece, and we were asking each other how long we should play it because we could have done it forever. That's why we ended up with the fade out."

BraveWords: What made you decide to write the songs in Swedish? Did that decision push the music in the direction it took?

Mikael: "I was taking my kids to school one morning, and I started thinking that maybe I should write the lyrics in Swedish. It's by no means a groundbreaking idea - it's been done before - but the more I thought about it the more I liked it. And it didn't have so much to do with what the lyrical content would be; it opened up the music for me and I had a plan. That's necessary for me, and whether I stick to that plan is irrelevant, but I need a plan to get going. I'm a very impulsive writer in terms of lyrics and music, I don't linger too much on an idea and I made quick decisions, and when I started singing the stuff it didn't sound weird. We've done one cover in Swedish ('Den Ständiga Resan' by Marie Fredriksson of Roxette fame), but I've never done my own songs with lyrics in Swedish, and it clicked."

BraveWords: Was it clear from the beginning that you would record an English version as well? Or was that an afterthought?

Mikael: "It was an afterthought because I got a bit proud with the music, and I figured that if a language - my language - is going to stop people from checking this out it would be a shame. So, I got a bit chickenshit (laughs). For a long time there was only the Swedish version, but then I figured the effort of dong an English version wouldn't be that bad. It's still the same music, the same message in there. The translations weren't all easy - there were a few problems - but I did it in a day. I gave myself poetic freedom to move things around a bit because it was the second take of an album that was finished. My version of it, though, is the Swedish version."

Watch for In Cauda Venenum to be released this fall via Nuclear Blast. 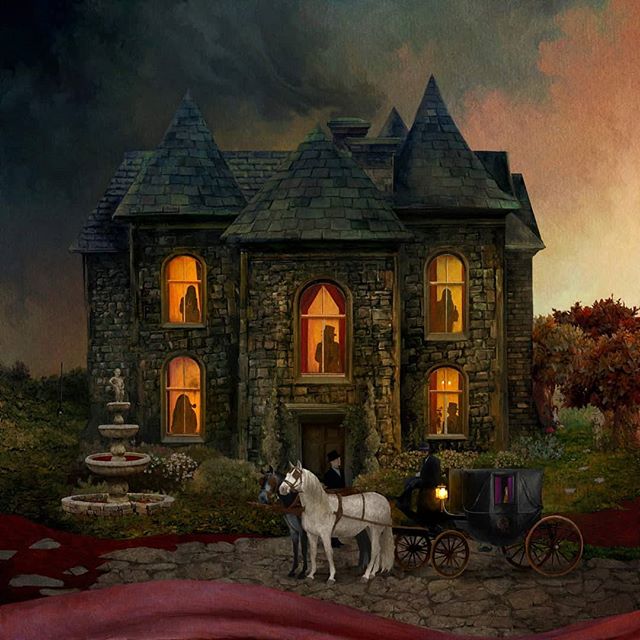