ROB HALFORD - “Metal Is Religion And Judas Is My Priest”

’Tis the season for festive metal! This is the second time the legendary Judas Priest singer has donned his holiday cap, this time more of a close-knit affair, Celestial under the festive banner of Rob Halford With Family And Friends. Christmas is all about family, and the Metal God is joined by his brother (Nigel) on drums, his nephew on bass (Alex, son of Priest bassist Ian Hill), his sister (Sue) on bells, and the twin guitars of Robert Jones and Jon Blakey. Along with four new songs ("Celestial”, “Donner And Blitzen”, "Morning Star" and ”Protected By The Light”), Celestial sees reworkings of such holiday standards as “God Rest Ye Merry Gentlemen,” “Joy To The World,” and “Hark! The Herald Angels Sing”.

But with Judas Priest on the verge of celebrating a painkilling 50th anniversary next year, why shift gears? And if he had the urge to venture out on his own briefly, my gut says most fans would like to see him revisit the Halford era or even reunite Fight. Those (freewheel) burning questions are answered below, along with an update on guitarist Glenn Tipton, who continuously keeps tinkering away in the studio on a follow-up to Firepower. And let’s be honest, with the question of induction into the Rock & Roll Hall Of Fame looming, where does the departed K.K. Downing sit in the grand scheme of things. It would be the ultimate 50th anniversary gift to fans to see the guitar tandem of Tipton and Downing back duelling on stage again.

Halford: "Did we talk about Celestial when we met at that venue where you gave us our fabulous shirts (last May at the Palace Theatre in Albany, NY)?”

BraveWords: No we didn’t - but when we walked into that venue in Albany - what a gorgeous venue - it was such a great moment for BraveWords, and hopefully also for Judas Priest. We finally got you your jerseys, what a shit show that was leading up to it.

BraveWords: What a wonderful moment - one of the highlights of my life, so thank you so much. 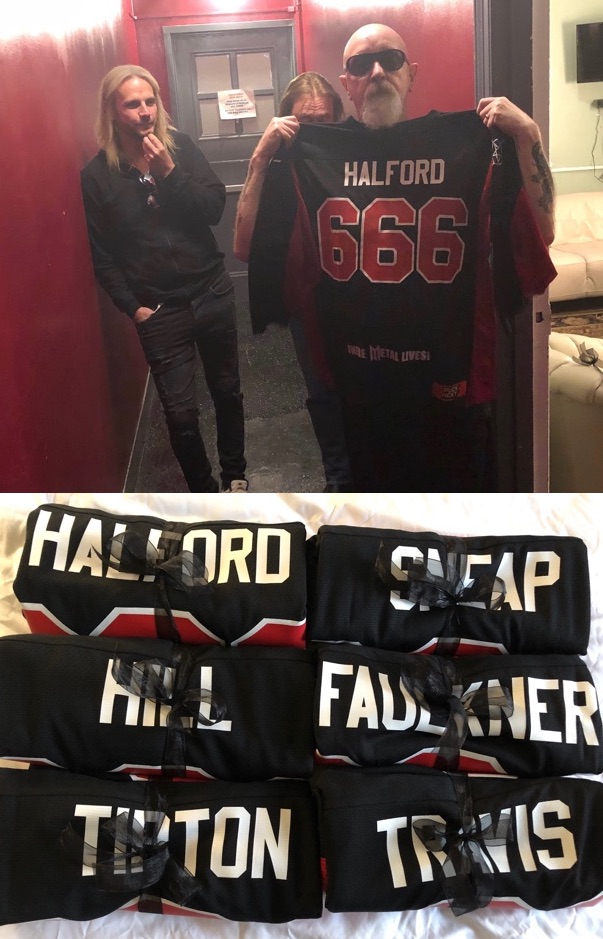 Halford: "Well, we go back a long way. It’s wonderful to see again how strong BraveWords has maintained itself in the metal community. It’s good to speak to you about some Christmas music!”

BraveWords: Yes! And we’ve talked about your previous Christmas album before this - and I know you’re a big fan of Christmas -  but I wasn’t aware of how religious you are, and apparently you’re both - a fan of Christmas and religion.

Halford: "(laughs) The reason why I’m laughing is that I don’t consider myself to be a religious person at all - and let me just explain what I mean by that - for me it’s more about finding some kind of harmony and balance in your life. And I reference the spiritual side of everybody. I believe we all have some kind of spiritual side, some kind of soul in us all, and so that to me is my little anchor. It helps me through the day and in various circumstances. So that’s been with me  ever since I was a little kid - you’re not aware of it as a child - and I don’t know how you feel on this subject, Tim, but I will say this - the longer I live and the further I go, the more value and the more importance that side of me has as a person in my day-to-day life. And in this case, it gets really kind of thrown into the big metal mix - the songs on Celestial.”

BraveWords: I know you’re not blind to this - you have given so many music fans forever a reason to be religious and they believe in this brand, this band called Judas Priest. It’s been a religion since the early ’70’s for millions of people.

Halford: "Totally agree. Yeah. I’ve seen the memes, you know ‘Metal is religion and Judas is my Priest’ - I don’t know who came up with that but I give them a gold star - those are very cool words. And that’s what we do in metal, we revere the bands and the artists that we love. I had an in-store the other day, here in Phoenix, and I hadn’t done one for years, and I met hundreds and hundreds of fans over about a 3-hour get-together. And so many of them, again, and you and I have talked about this before, talked about how incredibly powerful and potent metal music is, in terms of the way it gets people through dark periods of their lives, challenges in their lives. It can help when they’re recovering from an illness, whatever it might be. So, all of that to me is some kind of spiritual reference and that’s the way it will always be.”


BraveWords: I’m not the biggest fan of religion, but I’m a fan of Christmas whether it be with an “X” or not. And it’s always been about family and this record is a family affair.

Halford: "It is. And you know what it’s like when you’re making a record and you’re in the metal workshop and you’re putting all the pieces, all the components together, slowly creating something - and then you create it and it’s ready to be released - and now it has been released so now I can really kind of let go more than ever and thoroughly enjoy what my family and I did together with this music. More so the family I’m referencing is my brother and my nephew, and Robert and John mostly they did a lot of hard work, all the arranging and everything. [Mike]  produced it so well and mixed engineered it, then I just went in and squawked - in my reference about what I think about myself. It’s just wonderful, and to have the opportunity to work with my family on Christmas music, it’s even more special.”

BraveWords: So Christmas Day - tell me what that means to you. How does the Metal God actually celebrate Christmas aside from releasing a record two months before it?

Halford: "Well I would say 35 years ago I would have been down at the pub as soon as the doors opened, and I’d have probably stayed until checking out time. Now of course, I open my eyes and say, ‘Oh, I’m still alive! That’s a Christmas miracle!’”

BraveWords: I think that’s true for a lot of people!

Halford: "Yeah, I know. I’ve always felt very weird about being asleep because what the fuck goes on while you’re asleep? But, I wake up and I’m alive, I have my morning tea and cereal - because at our age you have to keep your bowels regular. And then amongst all the tea-drinking and cereal munching I’m generally checking my social media and checking out what the fans are doing, what they’re talking about, what music they’re listening to. It’s a lovely connection for me that we didn’t have before the double-edged sword of the internet. Around Christmas there will be a lot of Christmas greetings from all over the world, so that will be part of the day. I’ll be with my other half Thomas and I’ll be seeing my sister and my brother and my nephew and my niece and my grand-niece - what’s left of the dwindling Halford clan. First of his name, last of his name, Defender of the [...], Screamer of Vengeance, The Painkiller, The Metal God.”

BraveWords: I’m a foodie and I know you’re a foodie - so what does the Metal God want to eat at Christmas time?

Halford: "Yeah, it is, absolutely. Take that how you will. And then all the other stuff that everybody else has, turkey and stuffing and vegetables, gravy - and you can’t move after you’ve eaten so you sit on the couch and watch a classic Christmas special again. Or some old Top of the Pops again. British television for the holidays is very institutionalized. I don’t know what it’s like in Canada, whether you have the same thing on every Christmas in Canada, but I know we do in the UK. So there’s a lot of that, and Christmas gifts will be opened after we’ve all eaten, and a bit if a doze. And then you start eating again.”

BraveWords: But it’s all about drinking too and you don’t drink anymore!

Halford: "No, I don’t - but I drink tea. I’ve often thought about what the non-alcoholic beers might taste like because I know Andy Sneap is a non-drinker and he drinks non-alcoholic beer. The thing with me is the smell - once I smell the beer or wine or liquor, my mind starts spinning about all the bad stuff that I went through in those times, which is why it doesn’t bother me to be around drinkers for a short period of time, but after a while I have to leave the room because it’s quite challenging. So for me, tea. And nobody in my family drinks that much. My brother is a beer man, he loves all different kinds of beer, but my sister hardly ever drinks. We’re not really big drinkers in the Halford clan though, so that’s useful. Good old Yorkshire Tea - it has to be Yorkshire tea.” 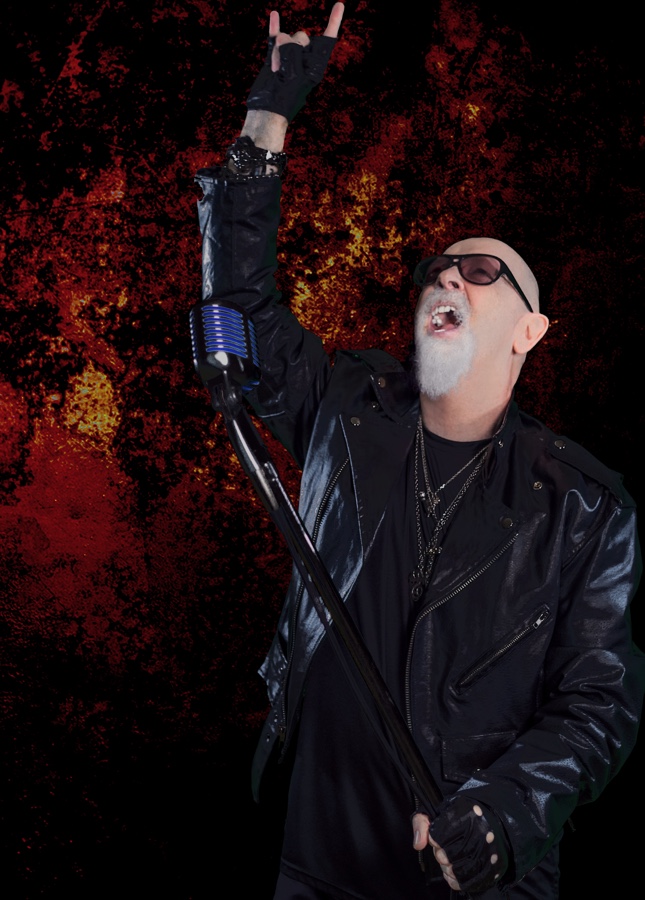 BraveWords: If you are willing to stretch out and do another Christmas record, why don’t we hear Resurrection Part 2?

Halford: "You know, anything’s on the table for me. Bands are like a kaleidoscope as far as where you go or what you do, when you might get back together again, I don’t know. I’ve been noodling some ideas again for some more Fight music.”

Halford: "Oh my God, yeah. And those two albums, particularly War of Words, it’s still quite a potent record that record. My curiosity as a musician has never diminished, you know. I always feel there is something more to try and do. The clock’s ticking - I’m older but there’s still plenty of time to get things done or looked at.”

BraveWords: We must talk about the Rock & Roll Hall Of Fame because they continue to play catch-up with many heavy bands that have been eligible for years. What’s your feeling on that?

Halford: "I’m thrilled to see the list this year, because as is usually the case it’s full of very very important, vital musicians. Sadly the list has some people on it who are no longer with us but that’s the importance and relevance of the Rock & Roll Hall Of Fame - to bring really strong focus to incredibly talented people who have left indelible music within the great umbrella of rock n’ roll. It’s an honour to be nominated a second time. Personally, I want to see Motörhead get in, I want to see Soundgarden get in, I want to see Priest get in. I have some of my friends on there and they are so deserving. Fingers crossed we get in for 2020 because it’s the 50th anniversary of Priest so if we got in then that would be a dream come true.”

BraveWords: And if Priest enters the Rock & Roll Hall Of Fame, do you think K.K. will be in attendance?

Halford: "I’m not going to answer that question, Tim. It’s like a little stick of dynamite. Tim, I love speaking with you, and I wish you a very Merry Christmas from the bottom of my heart, have a wonderful time, and I’ll see you next year sometime, yeah?”