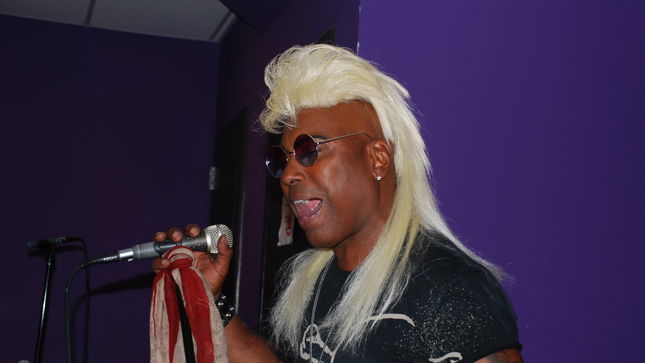 You know him from writing songs for some of the biggest names in rock, and pop, from KISS, the Ramones, Little Steven, John Wait, Glenn Hughes, and Doro, to N’Sync. He has also wrote hits for movies – Wes Craven’s “Shocker”, "Feel The Heat" from Sylvester Stallone’s Cobra, released several solo albums, to his own bands Crown of Thorns and Voodoo X.

Jean just performed at the H.E.A.T. Festival December 1st and 2nd in Germany, and was preceded by a warm up show November 28th at the Debonair Music Hall. He will also be appearing at the New Jersey KISS convention on December 7th-9th.

Had the chance to check out some of the rehearsal (thanks for the invite Jack and Jean), at the School of Rock in Somerville NJ, where Jack Frost is a teacher. I was able to hear the Cobra song “Feel The Heat” and the KISS hit “Uh! All Night” and everyone was in the moment feeling it. I also spoke with Jean for a few minutes during a break, great to talk to, very nice, easy going, loves his rock ‘n’ roll, knows and has worked with so many people in the business. His plans for 2019, as of now, should be more shows by the summer, preferably the European ones. Jean is really enjoying working with these guys and would like to hit the summer festival circuit.  Beauvoir also continues to write and play music (singer, bassist, guitarist, multi-instrumentalist), like a hard rock version of Prince. On the forecast recording wise he’d like to get back to his punk roots and is looking to create a new special project that is collaborative, but no time frame has been set yet.