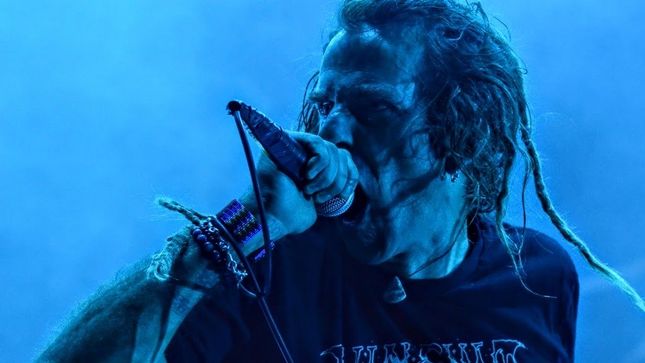 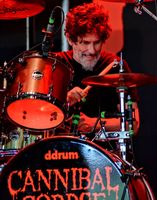 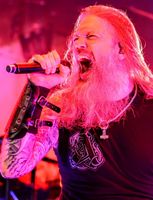 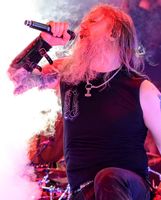 What a way to kick off the long Memorial Day weekend, one of the best package tours in a long time, outdoors. Across town, Billy Joel was also playing outside, at the Phillies baseball stadium. Ironically, in the late ‘70s-early ‘80s, when I was in high school (as were the guys in Slayer and most of thrash's Big 4 and beyond) Billy Joel was a big deal. Now, coworkers, 10 to 15 years younger, were headed to the "rocking sounds" of the Piano Man. Me, once and always a guitar oriented, heavy head!

Kind of bitter sweet, Lamb Of God's return to the Philly area, supporting the issuance of a 15th anniversary edition of their Ashes Of The Wake, with a trio from said platter. You see, it's also been 15 years since LOG recorded the Killadelphia DVD, across the river, at the Trocadero, the historic venue recently announcing its own demise. Opening with "Omerta" (from the reissue), the stage, a series of mirrored steps, topped by drummer Art Cruz (replacement for Chris Adler), their bastardized version of the American flag, a backdrop behind them. Randy Blythe walks onstage with a bottle of beer in one hand and water, in the other. The latter is to douse his head, before kicking into high gear, pacing (sometimes skipping) from one side to the other, like a caged beast. At the edge of the stage is a shadowbox on which the singer either perches, or launches himself into some sort of spinning, skateboard aerial acrobatics, minus any wheels. Red and green lights shoot up from underneath the grate, highlighting his dreadlocked features. Why does this dervish still uses a wired mic? It's not long before the first barricade crashers of the night appear. "Walk With Me In Hell" sees the now filled amphitheater (and 1/2 filled lawn) add their collective voice. Blue tinted "Now You've Got Something to Die For" turns green, mid-way through, the band nearly invisible to those in the seats, further back. Come the chorus, the band actually stops, allowing the crowd to shout the titular phrase. Blythe dedicates the red lit "512" to the late Philadelphian who released the initial Burn The Priest (pre-LOG) CD. Aqua lights and clouds of stage fog envelope "Engage The Fear Machine". Dreads flailing around (Blythe must sing upside down more than another else), a heavy hitting, red hued "Laid To Rest" sees pulsating strobes erupt across the top of each staircase, aimed right at the audience, and matching banks of vertically pivoting spotlights. At times, there's nearly as much smoke onstage as wafting across the lawn. Only a super-fueled "Redneck" can provide a fitting cap for the evening. 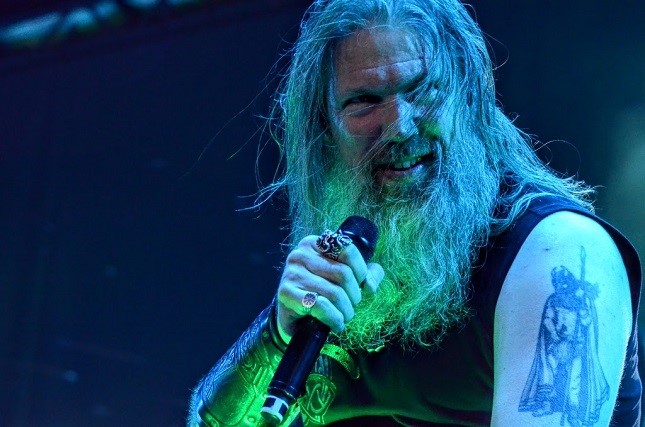 Still daylight when Amon Amarth set about pillaging. The hull of a ruby eyed, dragon head longboat is onstage. Boarded via a set of stairs, starboard and port sides, providing shortcut access for burly frontman Johan Hegg (and others) to the opposite ends of the stage. The setlist has changed throughout the tour and this being the next-to-last night of the current run, appears the Swedes were trying out some (more than usual) new material, for European audiences, which begins next week. A pounding "The Pursuit of Vikings" kicks things off, Hegg adding air guitar, tongue waggling and headbanging to his repertoire of bellowing vocals and ale horn prowess. These guys are truly one of the next generation, the "younger" bands (tough to say with two decades already under their belts), waiting in the wings, once the current top flight acts are gone. By the time they'd taken the stage, the crowd had more than doubled in size "Deceiver Of The Gods" heralds the first of many smoke/fog eruptions, across the front of the stage. The middle stretch could have used an injection of at least one oldie (on some dates, "Cry Of The Black Birds" had been included, but not tonight). Sure, the exclusivity of being the first to hear "The Way Of The Vikings" is special, but at the expense of “Mjölner, Hammer of Thor", the best track off Beserker? And sandwiched into a stretch of "As Loki Falls", "Crack The Sky" and "First Kill", if you're listening guys... For the red lit and yellow accented newbie "Crack The Sky", Hegg asks the crowd to jump, pogo in place. Who would disobey the Viking behemoth? Bass/drum rumbling "The Way Of The Vikings" has cheerleader Hegg, inducing a mass clap-along, the song punctuated by intermittent blitzkriegs of strobes. The green/blue lit "First Kill" commences with an almost a cappella/spoken word bellowing. Once the band joins, it quickly becomes a fist thrusting sing-along, with a chorus of "I am an outlaw" sung by many. A giant replica of Thor's hammer is swung by the frontman, each blow punctuated by four plumes of smoke, as Amon Amarth break into speedy "Twilight Of The Thunder God". America loves "Raise Your Horns", the toast, drink-along anthem (Skol!) before powerful "Shield Wall" (yet another new cut) and "Guardians Of Asgaard" bring an all too short set to a close. Thankfully, they'll be back, for a headlining tour, this fall. Be there!

Odd, literally seeing Cannibal Corpse. Not that our paths haven't crossed dozens of times in both our lengthy careers, but typically it's some dimly lit venue. Not to mention both bulky frontman George "Corpsegrinder" Fisher and Alex Webster are masters of keeping their hair draped across the face. So in 6pm daylight, was finally able to see/photograph them, properly. Stage left was New Jersey's own Eric Rutan, on guitar. The death metallers were only afforded six songs, lasting about 25 minutes, but the faithful filled up the bowl/pit area in front of the stage. Made no difference that much of general admission lawn and expensive under-cover amphitheater seats were empty. as the bearded Webster hunched over his bass and Corpsegrinder, front and center, pinwheeled his hair, under predominantly red (artificial) lighting. At one point, George challenged the fans to headbang, better/faster than him. "You will fail, but you can try." Fools, have you seen the neck on that guy!?! The Cannibals concluded with "Hammer Smashed Face" (the song once, but no longer, banned in Germany, although the urban legend persists amongst the ill-informed US fanbase).

Although BraveWords was prevented from shooting the headliner, in the best interests of Slayer and their fans, will offer a synopsis anyway.

Behind a translucent curtain, first emblazoned with four inverted crucifixes, then the Slayer logo, a quartet of fireballs elicit a roar of delight from the crowd, knowing what's about to burst forth. A red and yellow "Repentless" is over before the fans can come back from Cloud 9. It's back to the future for bassist/vocalist Tom Araya, looking younger, thinner and more limber, with dyed hair and neatly trimmed beard. Perhaps he read my reviews of the last couple of tours and mentions of gray hair/beard and visual comparisons to (Grateful Dead's) Jerry Garcia. To his left is the seemingly ageless Kerry King. Can this guy get any more heavy truck chains dangling from his waistband? Seems to add another multi-link strand, every tour. Opposite side of the stage and occasionally venturing elsewhere, is Exodus mainstay/guitarist Gary Holt, he of the herky-jerky motion. His Kill The Kardashians t-shirt all the more poignant, a decade after he first started wearing one. King is spotlighted, squealing out "Evil Has No Boundaries", followed by Araya's rapid-fire spitted lyrics for red drenched "World Painted Blood". Where there's smoke, there's fire and the stage is flooded with fog during "Hate Worldwide" a showcase for Holt's vertical held virtuosity, as well as King's whammy bar sustainability (under constant pressure/threat of metal fatigue), to be followed by flames, shot at various angles around the stage. Unlike recent concert stops, Araya was more talkative, his wicked sense of humor on display. Noticing some young kids up front, he asked, "I preach & practice caution. We have children around. You're here to have some family fun, obviously. On the count of three, everyone scream 'War!" Cue green bathed "War Ensemble" and the aforementioned fire works. Come the chorus, the whole house erupts, dual flame throwers spurting perilously overhead.

Between songs, the stage briefly goes black, the band reemerging (but nearly buried under fog) for the grinding introduced, pink lit "Gemini". Blue hued "Disciple" (solo by Holt) is augmented by flaming inverted crosses, the crowd adding to the "God hates us all" chorus. Holt goes crazy on the whammy bar for icy blue coated "Mandatory Suicide", the two guitarists temporarily switching sides as the entire backline breaks into (purposefully designed) conflagration. Seguing into "Chemical Warfare" under criss-cross firestorm, Holt and King stand side-by-side, in something of a challenge: who can deliver more notes and who can headbang faster. After a multi-song run for the diehards, it's (once again) an untouchable stretch run of classics: "Seasons in the Abyss", "Hell Awaits", "South Of Heaven", "Raining Blood", "Black Magic", "Dead Skin Mask" and "Angel Of Death". Most bands would kill to have just half that many known/loved songs in their entire repertoire, let alone just the last third of a concert! The ominous strains to crescendo building "South Of Heaven" begin, the band not visible, only blue lights swirling overhead. A cacophonous din, all players with back to the crowd, and aptly red lit, eventually the telltale notes that portent staccato "Raining Blood" are unleashed, along with lightning storm of white strobes. It seamlessly melds into smokey "Black Magic", lit in purple and yellow astral patterns. The finale (a word that takes on added significance in this context) would be "Angel Of Death". As the dying note of "Dead Skin Mask" fade away, Holt quickly trades guitars, on the fly, the green stage pierced by dozens of white vertical beams of light. The effect is broken by another fiery explosion, then the pyro master unloads whatever remains in his nightly arsenal (accent on "arson"). As King ventures stage right, to join Holt, Araya strolls into the vacated spot. Come the guitar break, the backline again implodes, seemingly the heat induced from Kings fingers setting the whole thing aflame.

Upon song's completion, the other bands & crew en masse join Slayer for a commemorative photo, as the fans continue to cheer. The individual members of Slayer, again alone onstage, face the fans, one last time Araya, in particular, spending several (surely emotional) minutes, just soaking up the memories. The end, complete.