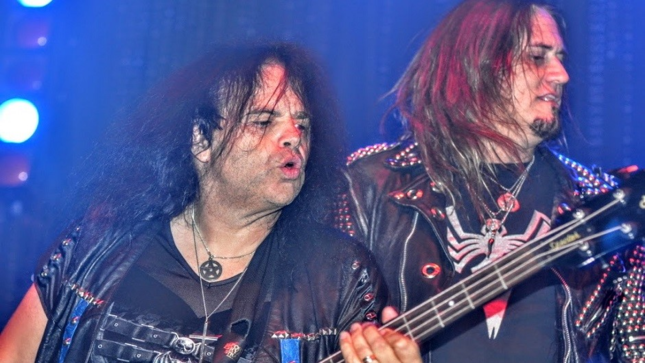 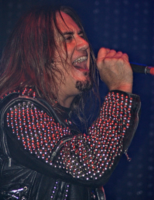 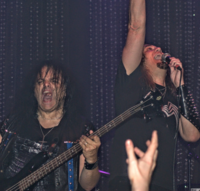 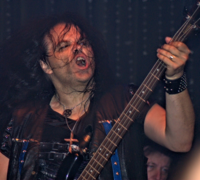 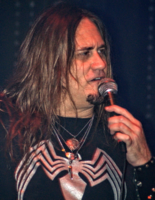 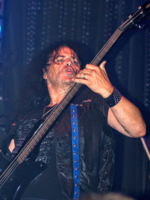 Maybe it was a curse, but naming a tune "Back In The USA" on their debut EP condemned them to never setting foot in North America, as a band, until now, despite a pedigree dating back to the start of the NWOBHM! Ahead of their time, with the ecology-based persona (each of four members dressed and wore make-up depicting an essential element: water, fire, earth & air), sadly any leftovers from the UK glam scene are long gone. Original bassist Lee Payne & his current incarnation of Cloven Hoof (featuring singer George Call and drummer Danny White, both of Texas traditional metallers Aska), in the midst of an ambitious length trek, stopped by Johnny Brenda's, in Philly, on September 20th. Sort of strange seeing all the extreme metal jackets/shirts: Nails, Darkthrone, etc. not necessarily a direct lineage to Cloven Hoof, but a warm body is potentially a new fan.

Danny's massive drums couldn't make it up the staircase, so he borrowed the opener's minimalistic four-piece kit and was worried about the lack of power. In the "show must go on" tradition, the band started, while Call was absent from the club, still searching for a place to park the van. As such, guitarist Joseph Whelan sang "Deliverance", saying, "I played on that album (Resist Or Serve). I can sing it." George arrived, in time for the next number and their signature tune was up third, with Lee on backing vocals. The Philly fans tried to goad Call into an Eagles vs. Cowboys (American football) rivalry, but he wisely opined, "I don't care about sports, only heavy metal."

"Nova Battlestar" saw bassist Payne thrashing about at the front of the stage, as the crowd offers the titular chorus. Given his age and full energy performance, easy to see how he could succumb to the humidity and Hellish summer temperatures in Germany, at the Bang Your Head festival, where he passed out, before the show was over. "Highlander" is marked by the singer's high-pitched squeal and old school "The Gates Of Gehenna" (off the '83 EP, then re-recorded for the eponymous Neat debut) has a bit of Iron Maiden in it, even before Call unleashes his air raid siren. The staccato, AC/DC stomp of "Crack The Whip" sees the vocalist drop to his knees, at the front of the stage. A dose of new Hoof, "Time to Burn" is a scorcher, Call shaking his hair side-to-side as Payne adds backing voice, as audience enthusiastically shouts the "On your knees" call & response chorus. The fan participation continued with "Laying Down the Law".

The military snare cadence of "Bannockburn" relates the Scottish fight for independence, Call mocking that it was written by an Englishman, from the Midlands (i.e. Payne). A red lit "Reach For The Sky" sees Call sing from the crowd, which most assumed was the crowning achievement of the night, but Payne said the crowd deserved one last song. Cue parting shot, "Kiss Of Evil". Afterwards, after humping their gear backstage (as Call manned the merch booth), the band hung around with fans. As it should be! A tentative return to these shores is planned for the spring of 2019, by which time, the new album should be released.