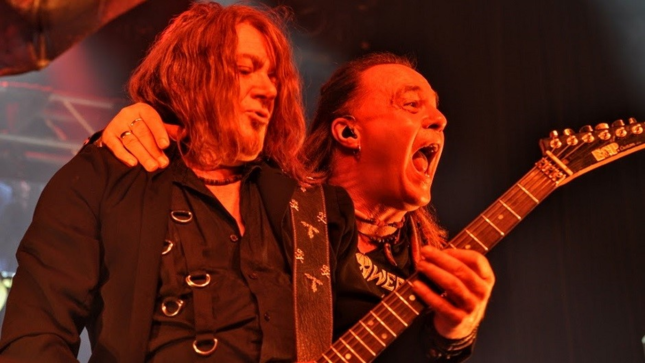 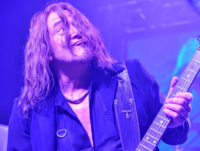 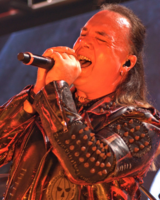 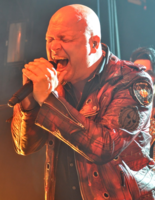 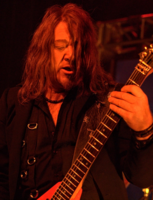 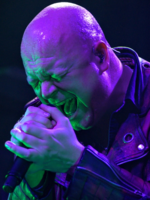 Weikath, Grosskopf, Hansen, Kiske, Deris, Gerstner, Löble: Perfect, these gentleman holding the keys. Ironic that their number now equates to the title of that iconic series of albums (Well, at least the initial pair). Can understand why the collective wants to keep this "reunion" going, just take a look at the merch line, winding down the Irving Plaza steps, to nearly the front door. While the five current Helloweenies (and Kai Hansen's Gamma Ray) struggle to pull audiences in the States, this was sold out, a veritable love-in, with the multi-generational crowd singing as much as the three vocalists. Some seeing Michael Kiske for the first time, others reliving memories of a lifetime ago. Small club may have precluded the use of carved pumpkin prop that surrounds the drums overseas, but even without the onstage video enhanced, doubt fans would have had any complaints.

Andi Deris and Kiske each had wireless mics, while Hansen, with guitar in-hand, was somewhat tethered to a mic stand, center stage. Not much space to move about anyway. Smiles all around, apart from the usually aloof guitarist Michael Weikath. Everyone looked to honestly be enjoying themselves. Good thing, as this is a little smaller stage than they've played elsewhere, even shoehorning the video screen, behind the drums. So all the guys were close, closer, and seemingly friendlier, than they've been in years, literally and figuratively. An orange tinted "Halloween" kicks things off, the hue creating pumpkin skin tones of all, but especially bald Kiske, who looks like a Jack O'Lantern! The vocalists retreat to the drum riser to avoid all the battling headstocks down front. "Dr. Stein" sees Weiki, with his blue Flying V painted with pumpkin cartoons, take center stage. Speaking of toons, artwork from the original single becomes cut-out animation for an onscreen lyric video, complete with clips of original b&w Frankenstein movie.

"I'm Alive” is followed by "If I Could Fly", Deris given the first solo spotlight, as Hansen switched to polka dot painted Flying V. "Are You Metal?", still with Andi the lone mic out front, sees the title flashed across the screen, as the crowd sings the chorus. Kiske, in red leather jacket, returns for green lit "March Of Time". Between tunes, the stage often goes black and there's short pumpkin animation onscreen. An overweight one recalls documentary filmmaker/muckraker Michael Moore. Bassist Grosskopf makes a rare foray to stage left, aka Weiki's side. For "Perfect Gentleman", Deris is adorned in black sequin dress jacket, with cane and shades. Makes no difference that this is not one of the definitive songs in the Weenie canon, the audience knows all the words and sings along.

Time for a little bit of old school, with Kai Hansen, in military officer's cap and sunglasses, at the mic, for a medley of early speed metal gems. As "Starlight" begins Weiki opts for white V and rejoins his old bandmate center stage. Fangface, once destined to be their mascot, appears on the video wall as they segue into "Ride The Sky". Even in the balcony (some standing in the doorways, unable to fully see the stage below, the titular chorus is sung, with gusto. No disinterested VIPs here. By "Judas" Weiki is adding backing vocals and Grosskopf has worked his way to the front once again, situated between Kai and Michael. The two guitarist’s trade leads during green lit "Heavy Metal Is The Law", Hansen still in charge, vocally. He gets the crowd to repeated shout "Heavy metal" during the call and response portion of the song.

Kiske walks on, as Kai departs, and says, "I have to do a ballad." Cue "A Tale That Wasn't Right", where's he's joined by Deris, who handles the highest notes. The new creation "Pumpkins United" sees all hands on deck, Deris eventually taking the bulk of the load, with Hansen on backing vox. Drum solos are typically a waste of time (a rest for singers, etc) but since this is about the old days, footage of the late Ingo Schwichtenberg is played, drumming (in video) alongside current skinsman Dani Löble. Nice commemorative touch, as all the other originals/principles are included.

A snippet of "Livin' Ain't No Crime", with bungee jumping pumpkin onscreen, segues into "A Little Time". It's four across the front, Kiske lead and Kai backing. A ticking sound effect is joined by close-ups of clock face and a uniform wearing, marching pumpkin army. The singer drapes his arm around Kai's shoulder. Sure, Kai sort of brought Kiske back from the wilderness, first with guest spots on tour with Gama Ray and then working together in Unisonic, but come the early ‘90s, who would have thought these two could ever be buddy-buddy again? Deris returns for "Waiting For The Thunder" and the fans are ready. He announces that "Sole Survivor" was the first song he recorded with the band, an oft overlooked period that righted the ship after a ton of defections and wonky recordings. "Power" and a blazing "How Many Tears", where the three singers truly trade verses (Weiki and Hansen share a quiet moment playing together too), closes the proper set.

From a darkened stage, the band, with Kiske the sole voice, reappears for an encore, as keys rotate onscreen. For "Eagle Fly Free" the singer is sandwiched between diminutive Hansen and towering Gerstner, who both offer backing vocal support. Fiery anime eagle and it's four across the stage front again, until Weiki steps to the fore, for lead break. "Keeper Of The Seven Keys" should be enough to satiate even the most ravenous Helloween fan, but no. The band go and return for a second encore, begun with a Hansen guitar solo. Jack o' lantern on a radar screen and spinning globe greets blue/green hued "Future World", as the crowd knows all the words, bouncing up and down, arms outstretched overhead. Those still with voice (and some on verge of laryngitis) sing closing "I Want Out" with Kiske, who starts and is joined by Deris after first verse. More cut-out animation from the vintage single artwork. Plenty of strobes and Hansen films the crowd on cell phone as Kiske and Deris get the crowd to alternate between titular phrase and ubiquitous "whoa whoa" Teutonic sing-along. Fireworks and confetti, onscreen.

What a celebration! If you ever considered yourself a Helloween fan (regardless if ever attended their concerts), you must make every effort to see this incarnation. A DVD is on the way and a brand new studio recording is planned, so undoubtedly they'll be back around. Can't wait!