VICIOUS RUMORS - 40 Years, Finally Out Of The Shadows? 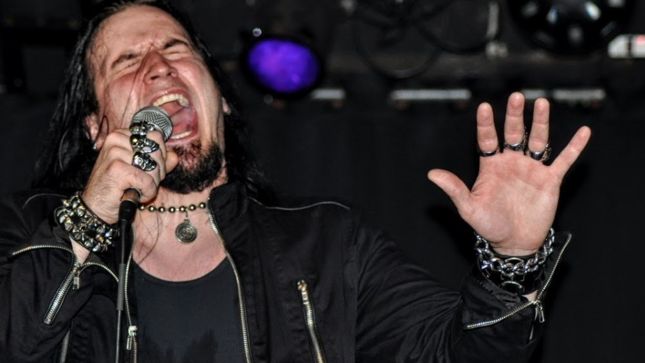 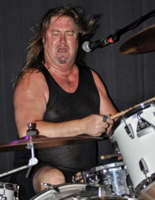 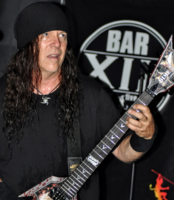 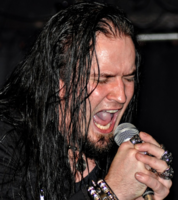 Anniversaries aplenty, as the current tour honors 30 years since the release of Digital Dictator, while they're also flogging a DVD of last year's Bang Your Head festival appearance, commemorating four decades as a band! Wow, some of us are getting old! Like any good vampire, another infusion of new blood (singer Nick Courtney, a veteran of American Idol) keeps mainstay/guitarist Geoff Thorpe (long hair poking out of knit skull cap, like a brunette Jay, Kevin Smith's sidekick in the Clerks series) going strong, which is needed on a DIY jaunt with nightly gigs, long drives and little sleep in between. Rock on!

The album begins with a short "Replicant" instrumental, so having yet another (i.e. second) intro, seems a bit of overkill. But once the San Fran clan hit the stage, it was the speed burner of a title track, followed by equally deadly "Minute To Kill". "Lady Took A Chance" sees Gunnar DüGrey, not Thorpe, handling the opening lead flourish. Speaking of ear candy, drummer Larry Howe has a moment to shine, on that one, which finishes with synchronized twin leads. Courtney informed the crowd that the album was being played in its entirety (chronologically), yet no one could come up with "Worlds & Machines" when "quizzed" about what came next. There's a Maiden gallop in there, complimented by Thorpe's backing vocals. For a guy who wanted the chance to sing metal, and got it, Courtney's vocal sustain is amazing!

"Run Like Hell" sees the two guitarists come together, center stage, as Courtney pinwheels his hair. "Condemned" has the fans offering the titular phrase, while album closer "Out Of The Shadows" sees the singer play off the bassist. The stage goes black, but there's no backstage, so the band is still there. When the lights return, it's "Down To The Temple", then twin leads of "Hellraiser", which serves to recall how fast/heavy they were, while signed to Atlantic Records, yet somehow still viewed as a "tweener": too heavy for the Sunset Strip, yet not noisy enough for thrashers. Equally fierce "Don't Wait For Me" ends the night (onstage), although there's still merch to hawk, gear to hump, hands to shake and autographs to sign, including a vintage US Metal compilation LP).

Here's something people don't think about...while bands love fans buying merch (it's the life blood of a touring act), the digital age can put a band in a bind, not having fistfuls of dollars at the end of each night. Thorpe reports that they go through nearly $100 in gas, a day, on long hauls. Gas stations, fast food restaurants, tolls, even the clubs they play, rarely take PayPal or other electronic payment methods. Geoff admits some guys in the band prefer to get paid via electronic transfer, not wanting a wad of cash on the road, but for getting the Rumors from Point A to Point B, cash is still king, at least in the USA.

A Northeast run is currently in the planning stages for April/May of 2019, following another European excursion (This Delaware appearance was as far east and north as they ventured, this time). Watch for it and celebrate with the band.