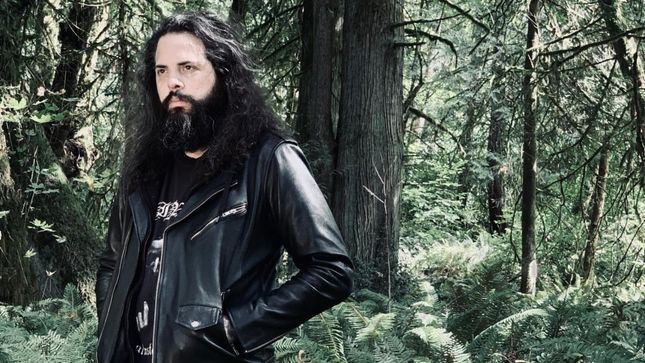 Abigail Williams, the black sheep of the black metal scene, returns with their boldest and most diverse offering to date, Walk Beyond The Dark, available tomorrow via Blood Music, and a tour that kicks off tonight in Richmond, VA. Stream the full album below, and find the band's tour itinerary here.

Equal parts introspection and extremity, Walk Beyond the Dark is a testament to the band's journey across the years - all the miles they've travelled, all the trials endured, all the mud thrown at them, all to keep doing what they love, on their own terms and without compromise.

"Overall, I'm incredibly proud of this album," says leader Ken Scorceron. "Musically, it's like the ending of one journey and the start of the next. I feel like I was able to take the entire history of the band, all the different sounds and styles we've experimented with over the years, combine it all into this grand mixture with new twists and turns, and take it to the next level. Even with it serving as a monument of sorts to everything the band has done before, it's not about the past, though. It's about closing a chapter and looking forward to what comes next, pushing onward and seeing where we go from here. Anyone who follows the band knows I've always done what's been in my heart, I'm always exploring new things and writing with what's in my head at that time rather than feeling beholden to anything that came before, and this serves as a stepping stone to leap into the unknown."

Songs like visceral opener "I Will Depart" and the torrential "Into The Sleep" take aspects and elements from each of the band's previous iterations - the gleaming metallic riff-work of In the Shadow Of A Thousand Suns, the seething rage of In The Absence Of Light, the grim grandeur of Becoming, the moody melodic menace of The Accuser - and weave them together into something that's far more than the mere sum of its parts.

The CD version of Walk Beyond the Dark will come as a six-panel, fold-out digipack, featuring the haunting otherworldly artwork of Mariusz Lewandowski. For the vinyl version, a heavyweight 180+ gram double LP, mastered specifically for vinyl and cut at 45rpm for maximum audio fidelity, will come inside a 350gsm heavyweight board single-pocket jacket, sleeved in poly-lined black inner sleeves. The vinyl edition will be available December 13. Pre-orders for both versions are available via the Blood Music site.