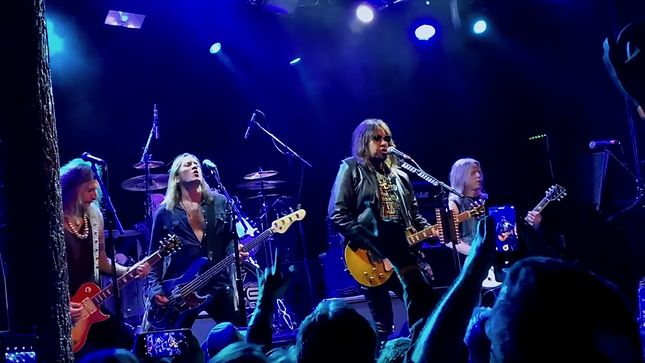 JAM Magazine has posted professionally-filmed video, shot by Metal Dave Media, of Ace Frehley performing "Rip It Out" live at Trees in Dallas, TX on November 9. "Rip It Out" was originally featured on Frehley's 1978 self-titled solo album.

Fan-filmed video of the performance can be seen below:

KISS recently announced that their End Of The Road tour will conclude on July 17, 2021 in New York City. The band will soon add 90 additional dates to their tour schedule.

In the video below from Rock And Roll Experience With Mike Brunn, shot on the recent KISS Kruise, the band's manager Doc McGhee reveals that original members Ace Frehley and Peter Criss, as well as Vinnie Vincent and anyone else who has played with KISS, are welcome to take part.

Says McGhee: "We want to include everybody that played with KISS and celebrate the 45 years of KISS. And everybody, from Vinnie Vincent to everybody else that they've performed with, and that have passed away and have played with, is part of this whole celebration of 45 years. So, we're still looking at what we're gonna do on the final show of KISS."

Hear more from Doc McGhee below:

Video footage of KISS making the announcement about the final show can be  seen below: