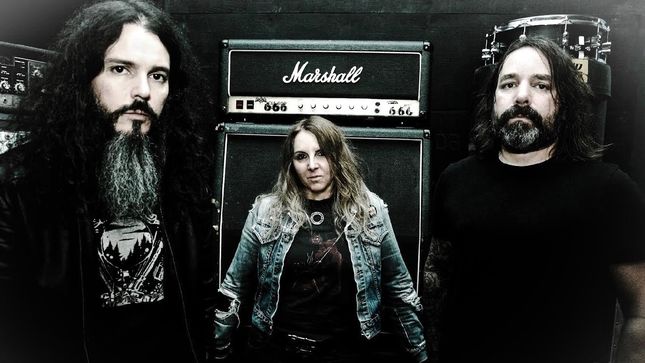 Acid King mark the 20th anniversary of their landmark doom album, Busse Woods, with a nationwide tour that sees the pioneering trio play the 1999 album in its entirety.

“For the old fans that bought this record twenty years ago, I hope they’re excited to hear the songs all played for the first time like this,” said singer/guitar player Lori S.. “By the same token, I hope that a lot of new fans who haven’t heard it live also have a special experience. We’re going out of our way to make it special for everyone. It’s what Acid King was always meant to be.”

The tour news arrives alongside word that RidingEasy Records will reissue the six-song release on August 30. The remastered vinyl release is available in multiple colors with in-depth liner notes and never before seen photos.

Busse Woods, initially released via Frank Kozik’s Man’s Ruin label, still exudes the same sense of mysticism it did upon its 1999 debut. Lori and bandmates Joey Osbourne [drums] and Brian Hill [bass] entered a practice space to write the full-length follow-up to their debut Down With The Crown but behind the scenes, the band and its members were suffering through both professional and personal tumult. The chaotic backdrop led to limited promotion for Busse Woods with some of the songs never having been played live. Over the years, new generations of fans have discovered the album, earning it a reputation as a must-have for lovers of stoner and doom. Acid King returned in 2015 with Middle Of Nowhere, Center of Everywhere.