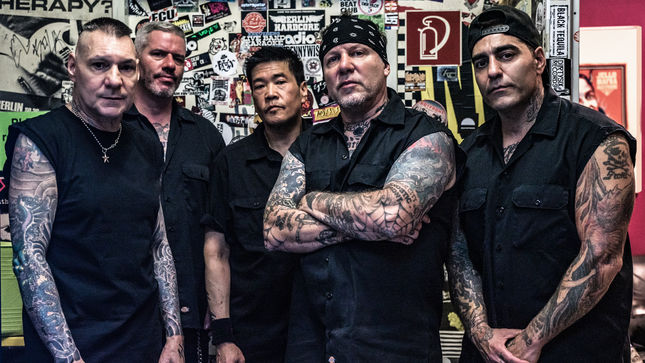 Agnostic Front are back to the scene with their twelfth studio album, Get Loud!, which will be released on November 8 via Nuclear Blast. Today, the band discusses writing the album in this new video trailer:

Get Loud! was produced by Roger Miret while long time friend Paul Miner handled the recording, mixing and mastering of the record at Buzzbomb Studio in Orange, CA. For the artwork, the band returned to 1986's Cause For Alarm​ artist Sean Taggart. It features the iconic CFA​ characters combined with a modern freshness

Get Loud! is compiled of 14 tracks that are nothing short of classic, home grown, New York hardcore, but still includes some thrashy and punky variety.

Get Loud! will be available in the following formats:

Pre-order Get Loud! in the format of your choice here. Pre-save the album on Spotify, Apple Music and Deezer, here.

Bridge Nine Records will release the Blu-ray edition of The Godfathers Of Hardcore, the critically-acclaimed, Ian McFarland-directed documentary, on November 15. The film is available digitally here.

The Godfathers Of Hardcore film is an intimate portrait about two of the most influential men in underground music - Roger Miret and Vinnie Stigma of the iconic New York hardcore punk rock band Agnostic Front. For over 35 years, the duo has shared something inside they couldn't scream loud enough. Something they couldn't play hard enough. Something they couldn't stop, even if they wanted to. Agnostic Front is the combined roar from the hearts of two guys who have fought their whole lives, and whose pain, passion, and power helped ignite a movement.

Starting in the '80s on the streets of the Lower East Side, Agnostic Front rose to play a key role in defining, shaping, and establishing the sound and code of conduct for a still-thriving, now-worldwide culture. Today, Roger, 54, and Vinnie, 63 remain the very embodiment of hardcore, representing endurance, perseverance, brotherhood, strength against oppression and the will to keep going-obstacles be damned.

The Godfathers Of Hardcore has been on the festival circuit since November 2017 where it premiered at the DOCNYC 2017 Film Festival. It has been featured at over 15 festivals worldwide, selling out the majority of those screenings and winning multiple accolades and awards along the way.

Godfathers made its US/Canadian broadcast premiere on Showtime in December 2018 then on SKY in The UK in July 2019 and both networks are currently streaming and broadcasting the film. The film was released worldwide on iTunes, Google, Amazon, Vudu, and Vimeo On Demand, and in the first week of its release the film quickly rose to be #1 Music Film on iTunes and held that position for nearly two weeks.

The Blu-ray edition of the film features eight different language subtitle options and will be available in a standard case as well as a special version housed in a gatefold 7" jacket cover, with a bonus, seven song live recording from the Agnostic Front show Berlin that is featured in the film.