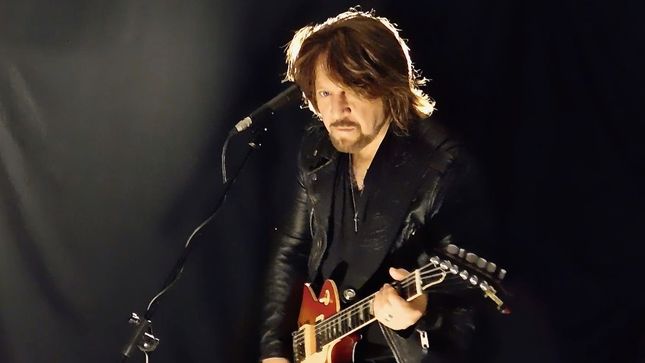 Jimmy Kay and Alan Dixon from Canada's The Metal Voice recently spoke to multi-instrumentalist Aldo Novo about his new album The Life and Times of Eddy Gage. Also in the chat Aldo Nova talks about his writing credits with various bands such as Bon Jovi, Blue Oyster Cult and many more.

On the album’s musical direction:

"It's a rock opera, it's got super rock songs, it's got techno songs, it's got a song with a 40 piece orchestra and my voice, it's got a heavy duty rock songs, synth pop, gospel, rock and rap, so it's mix of everything, every song is different. Every song is written around every character. One thing that is in common in me and my music, is that it has to draw emotion, it can't be sterile. For me I make music out of emotion. It took 12 years to finish, twenty-three songs and two hours long. "

On the concept behind the album:

"The story you might as well call it is an autobiography, it might as well be called The Life and Times of Aldo Nova. The story is of this young kid who plays clubs and then gets noticed by a big record company executive. Then he gets famous (the main character) and then he goes and plays big stages, then he gets introduced to a woman by the powerful Greek record tycoon. The woman leads him down the path of drugs and he has a psychotic breakdown. It's my life story pretty much. It ends with redemption where he is happy spreading his message of faith, hope and love which he originally wanted to do from the beginning. There are 23 songs on the album and you might have maybe 19 characters."

On how the album will be released:

"There is either one plan where I release one song every two weeks to keep people involved. Also talks are in progress to bring this to a huge stage production which was my dream all along."

If his contribution to Bon Jovi’s debut album has been downplayed:

"He is pretty cheap with credits, instead of saying Aldo Nova did this and that (referring to contributing to the album), he just said Aldo Novo appears courtesy of Portrait records and that was it. On my albums everybody gets credit."

Canadian rocker Aldo Nova released a new single, "When All Is Said And Done", on May 29. The track is taken from his upcoming rock opera, The Life And Times Of Eddie Gage. It's heavy hard rock sound with its bombastic guitar riff to his unmistakable vocal shows that Aldo Nova has never ceased to evolve and is back with a vengeance.

The official video for the song can be viewed below.

Aldo Nova posted the photo above, along with the caption: "Here during the shooting for the video of my new song, 'When All Is Said And Done'. Many hours were spent for 3 nights with Sylvia Bechard behind the camera to get exactly the shots that director Christian Jacques had carefully mapped out for us to create his vision of the video which will be amazing.

"I work with a great team of extremely talented friends that are the top in their respective fields and great musicians and together we always give 1000%, and it makes us feel good when you feel good."