ALICE COOPER - "If He Were Alive, LEMMY Would Certainly Be A HOLLYWOOD VAMPIRE..." 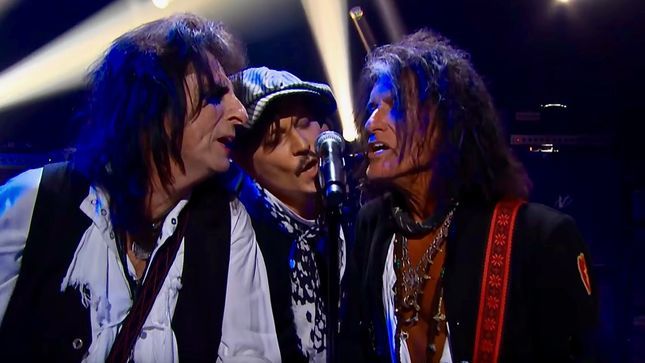 Shock rock legend Alice Cooper is featured in a new interview with UK-based Kerrang! discussing the Hollywood Vampires, his side project featuring the guitar team of Joe Perry (Aerosmith) and actor Johnny Depp. An excerpt is available below.

K: You recently completed a seven-date North American tour. What’s the best reaction that the Hollywood Vampires have received so far?

Alice Cooper: “When did Wembley it got voted ‘Best Show Of The Year’ there. We were surprised at that – that’s quite an honour. Wembley gets a lot of shows, and for fans to vote us as the best show of the year… I look at that little piece of plastic they give you and think, ‘That’s pretty cool.’ It’s not something that we brag about, but we certainly look at it and go, ‘Wow!’”

Alice Cooper: “If he were alive, Lemmy would certainly be a Vampire. He’d probably be our bass player! All of us knew Lemmy, on different levels, because he played with us so many times – everyone in the band had done tours with Lemmy. He was sort of a journeyman. I quit drinking 37 years ago, but he came to me once and said, ‘Alice. I quit drinking.’ And he had a drink in his hand! I was sitting there going, ‘That’s great – and that must be Coca-Cola?’ He said, ‘No, there’s a little whiskey in there.’ His idea of not drinking was not drinking a bottle of whiskey each night. Maybe just five or six drinks.”

Earlier this year, Hollywood Vampires completed a triumphant seven-city North American tour which included a sell-out show at the famous Greek Theatre in Los Angeles and the group was voted “Best Performance” of 2018 at London’s Wembley Arena.

An exclusive glimpse behind the scenes on the road can be found in the video for “I Want My Now” off of the album Rise. Watch below: