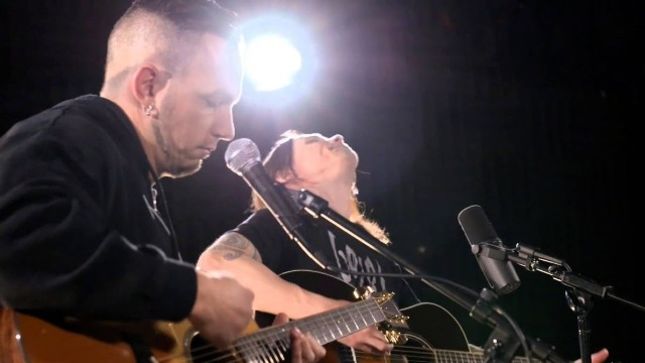 Speaking with Music Radar, Alter Bridge guitarist Mark Tremonti and frontman Myles Kennedy discussed how they worked on songwriting for their new album, Walk The Sky,  revealing their eight essential tips to become a better guitarist. Following is an excerpt from the rundown.

Try To Surprise Yourself

Myles: “Unpredictability is incredibly important. 'Wouldn’t You Rather' has me trying to mimic quarter tones to create this whole different vibe droning away on the D-string and getting real modal on the G. Those sounds can be quite dissonant for those of us who grew up only knowing 12 notes. When you hear those micro tones being used in Eastern music, they can twist your ear. Luckily it can work in a rock context...”

Mark: “It’s almost a bit Orient Express! Some of these ideas felt like the best we’d written in a long time. As it turns out, Myles told me he’d been watching Stranger Things and was inspired those original synth sounds. The early ones had the coolest tones, I think the more they developed them the less I liked them. Listen to the soundtrack to The Warriors or any John Carpenter movie... that’s the vibe we wanted to add to this record. Even just one note or chord can really throw you, like in the chorus of 'Indoctrination'. All it takes is one little ear-twister to keep people on their toes. None of us want to keep writing the same thing, it gets boring and redundant.

"On the song 'Native Son' I had this idea I showed to Myles, who already had a lot of the song worked out but no bridge, and together we flipped the time signature round. You’re bobbing your head to the song and then suddenly it all warps. There are a lot of those types of surprises on this album.”

On the heels of wrapping up the successful Victorious Sky Tour alongside Skillet and Dirty Honey, Alter Bridge achieved another milestone in their 15-year career. The latest album Walk The Sky (Napalm Records) has brought the band comprised of Myles Kennedy on vocals/guitars, Mark Tremonti on guitars/vocals, Brian Marshall on bass and Scott Phillips their first ever #1 on Top Current Albums chart.

Walk The Sky entered the official album Charts at #3 in Austria, Scotland and the Swedish Hard Rock Charts, at #4 in the UK and Canada at #5 in Germany, at #7 in Australia and #16 in the US Billboard 200.

“15 years into our career as Alter Bridge and we finally have a #1 for album sales in America! We are over the moon to say the least. More important, we are forever grateful to the fans for making it happen,” explains Myles Kennedy.

“We are so honored and excited about the response to the new album. It is a testament to how incredible our fans are and the support they always give us. Thanks to everyone who picked the album up and helped us achieve another career first for Alter Bridge,” adds Mark Tremonti.

Find the band's complete live itinerary at this location.