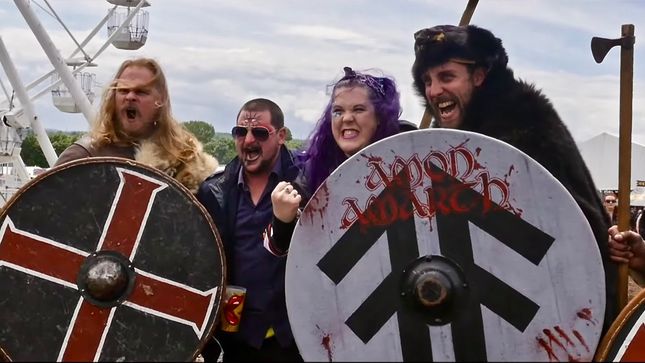 The 2019 Download festival took place June 14 - 16 at Donington Park, UK. Amon Amarth performed on Sunday (June 16) and have since released this recap video:

Amon Amarth are set to crash onto European shores this November and December to raid the continent with their biggest and most ambitious, must-see full production tour to date. This epic tour comes on the heels of the victorious worldwide release of the band’s 11th studio album, Berserker.

Berserker smashed into the top echelons of sales charts around the world, including debuting at #1 in Germany and Switzerland, and #2 in Austria, earning the band some of their highest chart positions to date, including in the UK.

Joining Amon Amarth for the three show UK rampage will be special guests Arch Enemy, touring in support of their 2017 critically acclaimed album Will To Power, and legendary Swedish death metal squad Hypocrisy. Additional guests in other countries are to be announced at a later date.

Amon Amarth: “We cannot wait to return to Europe and tour the UK with our fellow Swedish Berserkers Arch Enemy and Hypocrisy. We will be bringing our biggest headlining show yet and this truly is going to be an epic heavy metal party that is not to be missed!”

Arch Enemy's Michael Amott: “I can’t think of a better way to wrap up an intense and exciting 2019 Arch Enemy touring year than heading back to the UK with our Swedish friends Amon Amarth and Hypocrisy! This will be a celebration of everything that is awesome about Heavy Metal, the Scandinavian way! Skål!”

Hypocrisy's Peter Tägtgren: "Hypocrisy are very much looking forward to this UK run and to share the stage with Amon Amarth and Arch Enemy. This will be epic!”

The confirmed UK dates are as follows: