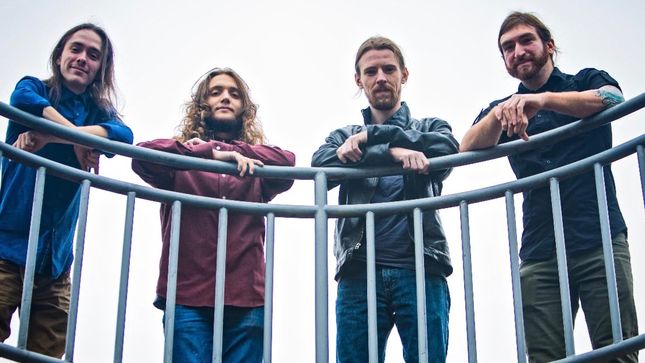 "'Sublimate' is probably my favorite song to play from the album," says guitarist Sean Parkinson. "This song carries a mix of influences from upbeat bluegrass to math rock that reminds you of simpler times on the schoolyard playground to moments that make you feel like you won the jackpot on a slot machine."

"Sublimate" is the first Anamorph song to be played exclusively fingerstyle, with the exception of one section.

Parkinson says, "The section at 2:22 features a technique of my own that I call 'Left Hand Tremolo Tapping,' even though I'm a lefty and use my right hand for it. The technique requires me to tap the same note 2+ times with the 'right hand,' leaving the 'left hand' open to tap the rest of the melody. This allows me to play a 'two-hand tapping' section that features duplets to quadruplets or even more on a single note, while being able to add to the melody with the 'left hand.' In other words, imagine being able to tremolo single or multiple notes while being able simultaneously tap chords or a lick on top of it with a single guitar with no looper! The possibilities are endless."

The Raleigh-based quartet - featuring Sean Parkinson and Cole Lohmann on guitars, James Agusta on drums and Griffin Daniels on bass - deftly weave notes of prog-rock, prog-metal, tech death, math rock, post rock and other influences together, making the 57-minute Lucid an intriguing listen for any fan of thought-provoking metal.

Lucid, which was recorded by renowned producer Jamie King (Between the Buried and Me, Scale the Summit, The Contortionist), is available for pre-order now via the band's website, Bandcamp and iTunes, and the album will be available to stream upon release via Spotify.

Anamorph likens themselves as "a band about the world" - writing music that is deeply reflective, with themes and motifs that span the scope of the human condition - wide ranges of emotions, states of mind, thought processes, and perspectives. Anamorph emulates the world at large, drawing attention to triumphs and shortcomings, beauty and destruction, the struggles of growth, and the uncertainty that encompasses us all as we drive forward into the future.

Agusta adds: "These themes can all be found on the album, which plays and develops as a progression of thought. Musical and thematic motifs can be found throughout the album, which create ties and links between the overarching theme of the record."

Anamorph wastes no time kicking off the album with "Reverie" and "Myopia", two different entrancing examples of heavy prog-metal/rock mixed with experimental ethereals. Tracks like "Hubris" show off the band's jazz metal inspiration, while songs like "Fading Azure" and the outright ripping "Feasting a Ravaged Earth" delve into total tech death. Listeners can expect this and more on Anamorph's truly astonishing new offering.

Anamorph have honed their performance chops by supporting artists such as Felix Martin, Consider The Source, Sarah Longfield, Toothgrinder and more. The band is scheduled to hit the road on a tour of the US east coast this September, performing with various artists along the way such as Stellar Circuits and others. See below for a full list of confirmed dates.