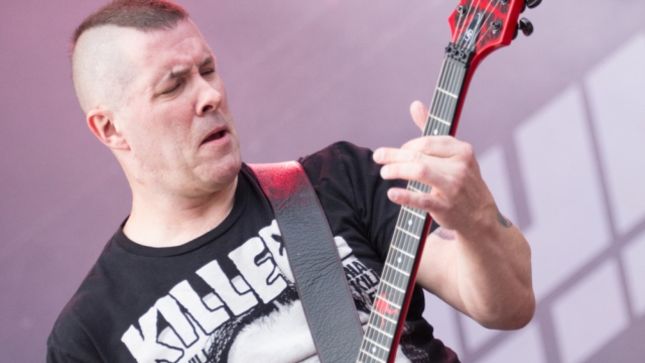 "Domestic abuse: It can take on numerous forms, including physical, verbal, emotional, economic and sexual abuse. Violence, threats, intimidation, blackmail... common with this. I've written a few songs on this subject since 2001 ('Battered', 'Rage Absolute', 'All For You', 'Snap', 'One To Kill'). The new song 'Psycho Ward'  is the next to cover this issue.

Let's call it 'fictional'; about a total narcissistic, insecure, evil person who sees all others as beneath him. Wife, kids, family are simply property and money is the only way to be 'someone' or 'something' in life. Family is only a 'status' thing and, when it starts to question or want to escape from the intimidation / abuse, it is either physically beat down to prevent escape or it's 'conditioned' to shut up, take it and do what it's told. In the end, this asshole got what he deserved, yet only after severely damaging his family.

In real life, assholes like this cause unbelievable psychological damage to their children and (former or current) partners, yet they are so psychopathic or evil or narcissistic to even care: it's all about them ('Poor me!') and they are never wrong; always someone else's fault. I've heard some horrible stories about women / men being put out for the night with the family dog, punched in the face, kicked, pushed down stairs, raped, terrorized, threatened with horrible violence, etc. Young children told they were fat, no good, losers, an embarrassment and the abuser's sick beliefs forced on them... to be just like him / her or they were failures.

While tough to get out of, those who do have a chance at life. Victims of these abusers can get through life but often the damage is permanent. Scarred.

Love to all you survivors out there. There's hope and help and good people out there that can help. More on that later."

Find the band's previously released lyric video for "I Am Warfare", below.

A name that should need no introduction in the metal world, Annihilator was forged in Canada in late 1984. Since then, the band has been touring and releasing records, selling millions of albums to date, nonstop, for over thirty years. Cited by bands like Megadeth, Pantera, Dream Theater, Children Of Bodom, Lamb Of God, Opeth, Trivium, and so many more as having influence on their music, Jeff Waters and Annihilator have continued to tour the world, year after year, whilst consistently putting out high-quality true-metal music. It takes a long time to reach legendary status, and no one can dispute that Annihilator are inspirations, teachers, legends, and a force demonstrating what hard work and love of your craft can bring to the world.

Produced, engineered, and mixed by Waters, Ballistic, Sadistic was recorded at the brand new, state of the art Watersound Studios UK, in Durham earlier this year with additional engineering and editing by bassist Rich Hinks and mastering by Maor Appelbaum at Maor Appelbaum Mastering in California.

Ballistic, Sadistic will be available in limited-edition digipak, vinyl, and digital formats. For pre-orders, head here.

"I Am Warfare" lyric video: