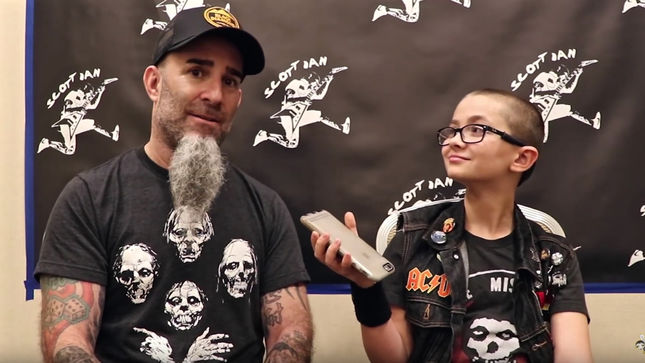 Anthrax guitarist Scott Ian was interviewed by Elliott Fullam of Little Punk People at the Chiller Theatre expo in Parsippany, NJ yesterday. They talked about many different things including getting nervous about meeting people they look up to, superheroes, horror movies, Scott’s new show Never Meet Your Heroes and much more.

Roger Coletti, Volume’s executive producer and a former MTV/VH1 radio programming veteran, has spent the last six months bringing together a diverse cast of characters to deliver a mixture of live daily shows, artist interviews, weekly specials, a music trivia game show, album reviews, and several in-depth docuseries across all genres of popular music. Hosted by the most respected, knowledgeable, and passionate people in music today - including artists themselves.

A description of Scott Ian’s show reads: Never Meet Your Heroes with Scott Ian features the Anthrax guitarist and heavy metal icon as he chats with his celebrity idols and musical influences about what inspires them. Corey Taylor of Slipknot will be the featured guest on the debut show.