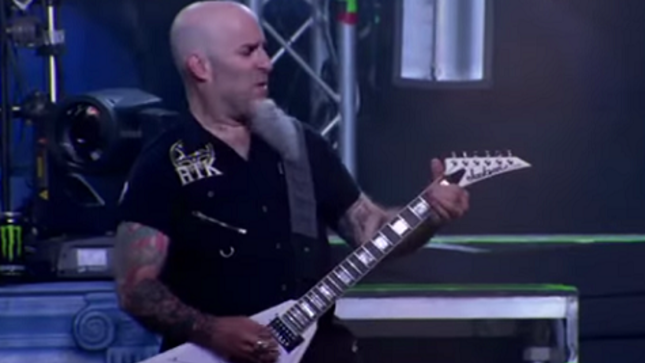 Anthrax guitarist Scott Ian was recently interviewed by Cat Unwrapped from Collision on Australian radio station Voice FM. An excerpt from their chat, in which Scott dishes on how he's kept Anthrax going for more than three decades, has been transcribed as follows:

"People think there's some secret or there's some magic answer to doing this, but there isn't — it's work; it's just hard work all the time. That's the secret. And nobody wants to do that. Even being in a band, yeah, I understand — I get to play my guitar on stage with my friends, and that's a fucking privilege that I get to do that, and I love that. But that doesn't mean it's not super-hard work all the time, and all the hours you're not on stage and all the business you're dealing with constantly. And then even staying focused and energetic night after night after night on tour, and the traveling and schlepping around the planet. There's harder jobs out there for sure, but I've been doing this for 37 years, and it takes an insane amount of focus to keep something fun and interesting and successful for that long."

"Australia! I am on my way Down Under," exclaims Anthrax guitarist Scott Ian, who is taking his One Man Riot spoken word tour to Australia for a string of dates this month and next."

VIP upgrades are available at scott-ian.com.

Says Scott: “One Man Riot is what I call my talking show because the pretension of saying I am doing a ‘Spoken Word’ show is too much to bear. This isn’t a poetry reading. This isn’t an evening of sensitive discourse. It’s an evening of ridiculous truth.”