ANTHRAX Pulls Back The Curtain On The Persistence Of Time Album And Touring Cycle With Six-Episode Video Series; Episode One: "Dali" Now Streaming 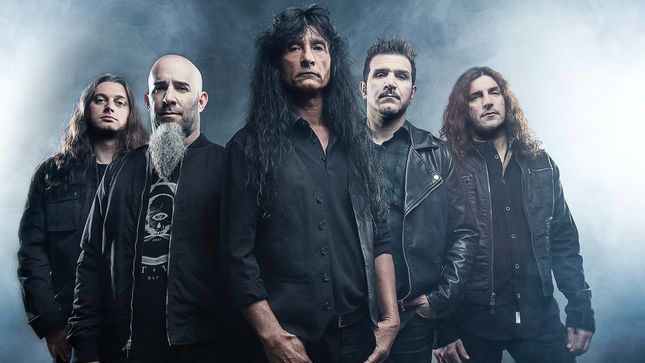 Anthrax - Joey Belladonna/vocals, Frank Bello/bass, Scott Ian/guitars, and Charlie Benante/drums - invite you to get the inside story behind the making and promotion of the band's fifth album, Persistence Of Time, and its 30th Anniversary Deluxe Edition due out August 21 (Megaforce Records).

This six-part video series is hosted by Charlie, who assembled and oversaw the anniversary edition. Throughout the series, he shines light on where the band was at during the writing and recording of the album, the album's songwriting process, collaborating with Public Enemy for "Bring The Noise" track and subsequent tour, the "No Prayer On The Road" tour with Iron Maiden and "The Clash Of The Titans" tour with Slayer and Megadeth, why the album's cover art was revised for the Deluxe Edition, the week spent filming an episode of the popular TV series, "Married With Children," and more. The clips also feature band members' personal photos and film/video clips from the period.

Check out Episode One: "Dali" below:

On August 21, 2020, 30 years to the day after its initial launch,  Anthrax will celebrate with the release of the deluxe anniversary edition of their fifth studio album, the Gold-certified Persistence Of Time, produced by Anthrax and Mark Dodson (Megaforce). Available exclusively on disc and vinyl, the CD package will include two CDs and one DVD, the vinyl edition offers four LPs, as well as revised cover art that reflects what had been the album's original visual concept. Pre-orders can be placed here.

As with Anthrax's previous anniversary deluxe editions, the band's Charlie Benante shepherded the one for Persistence Of Time. Disc One is comprised of the 11-track album, fully-remastered by Paul Logus (who mastered Anthrax's Worship Music and For All Kings. the Anthems EP, and the DVDs Kings Among Scotland and Chile on Hell). Disc One also features a special "bonus B-side" version of "I'm The Man" from 1990 that leans more hip-hop than rock, and a live version of "Time" that was recorded at Michigan's Palace of Auburn Hills in 1991. The final two songs on Disc One, as well as all nine tracks on Disc Two, are special recordings from "Charlie's Stash," an incomparable wealth of Anthrax music from the band's rehearsals, writing sessions, preproduction, and live performances that Benante has recorded over the past 40 years and has been kept safely filed away. These recordings will put listeners "in the room" with the band, privy to the evolution of the songs on Persistence Of Time starting with Benante's original riffs and demos for the songs, moving on to Frank Bello, Scott Ian, Joey Belladonna, Dan Spitz, and Benante shaping the songs in rehearsal, then into preproduction, and finally into the recording studio. Said Benante, "you'll hear parts of songs that never made it to the final recording or songs with an arrangement different from the finished song."

The 40-minute "guerilla-style" DVD was shot when Anthrax was on tour with Iron Maiden in 1991 and features live footage of Benante taking over the drums for Iron Maiden's Nick McBrain, as well as backstage and dressing room footage with members of both bands. The piece wraps with Benante, Bello, and Ian joining Iron Maiden on stage for the final song of the night, "Sanctuary."

Check out the first single/music video from album's 1990 release, "Got The Time":

With revealing liner notes written by Scott Ian that pull back the curtain on some of the incidents that fueled the album's lyrical content, the artwork showcases a selection of mementos from the Persistence Of Time cycle: script pages from the band's 1992 "My Dinner with Anthrax" episode of the TV sitcom "Married With Children," band photos and magazine covers, backstage passes, and an assortment of vintage promo items. Also, the deluxe package's cover art has been revised. Explained Benante, who also oversees all of Anthrax's artwork, "We had been a band for only about five years, but so much had been and continued to be crammed into those few years, and we realized we couldn't stop time, it was just persistent. Simultaneously, I was at the height of my Salvador Dali phase, I was just absorbed in his art, and I wanted to tie the two together - Salvador Dali and time. I loved what [artist] Don Brautigam did with the original cover, but for this deluxe edition, I wanted it the way I had originally seen the cover in my head - with the clock melting, so that's what we did."

"Recording the vocals for this album was a great experience," said vocalist Joey Belladonna. " I really liked working with Steve Thompson and Mark Barbiero, everything came together nicely, we all became good friends. And it was great to work in Manhattan again, especially at Electric Lady Studios. That place has such an aura, recording in the same place where Jimi Hendrix, The Rolling Stones, David Bowie, and Led Zeppelin did, it was a really cool experience."

"One of the things I'll never forget from the 'Persistence Of Time' tours," added Frank Bello, "was when we played the songs 'Time' and 'Got The Time' live. We had this big clock on our stage, the 'Persistence Of Time' clock, and the hands on this clock went around and around while we played the songs 'Time" and "Got The Time." Today, something like that would be motorized, but back in 1990, it had to be done manually using a hand crank on the back of the clock. My bass tech from that time, Troy, it was his job to keep those hands turning during those two songs, throughout the entire songs. I mean, what a workout that guy got from turning that crank."

"It was a weird time for us for a number of reasons," added Benante, "but at the same time, a lot of great things happened. We did 'Married with Children,' we toured with Slayer and Megadeth on the 'Clash of the Titans Tour," and we recorded 'Bring The Noise' with Public Enemy, and that turned everything around."

"We put a lot of work into Persistence Of Time. We pushed ourselves harder, self-analyzed, criticized, and agonized more than any of the previous records, and we were really proud of it." - Scott Ian, from the Persistence Of Time liner notes

Charlie Benante: "Here is a peak of some of the video footage you may see..."