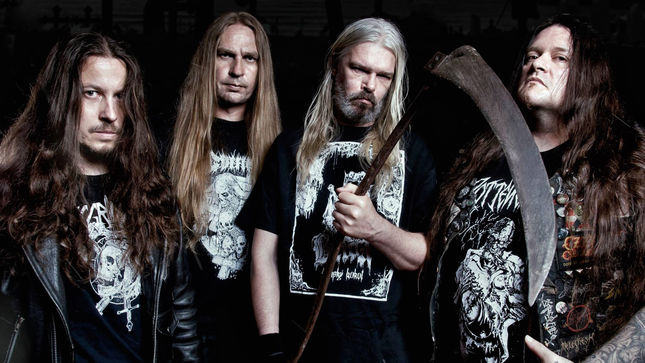 “Candiru”
“Division Brandenburg”
“Wardroid”
“The Feeder”
“It Came From The Skies”
“The Grand Denial”
“Incoming Death”
“Forerunners Of The Apocalypse”
“Subterra Incognita”
“Wildland Fire”
“Death: The Only Immortal”

Asphyx vocalist Martin van Drunen checked in with the following comment about the album: “Incoming Death, the third Asphyx album after our resurrection in 2007, contains 11 furious songs in the traditional death/doom style which we are known for so well. Only more unmerciful than ever! Lyrical themes include gore humor, death, doom, war, sci-fi, the varying trustworthy Asphyx subjects, each fusing perfectly with the metal of the tracks.

“The album title already existed two or three years ago, being a phrase that doesn't really exist but refers to what entrenched soldiers cry out when under severe artillery fire. Thus Incoming Death implies another relentless bombardment of monstrous Asphyx death/doom metal!”

The album’s artwork (which can be seen above) was once more created by longtime design-ally Axel Hermann (Sodom, Grave, Morgoth), who commented on the artwork approach as follows: “Incoming Death is my tenth collaboration with Asphyx. Instead of visualizing the obvious, which would have been a reaper just collecting the soul of a dying man on his deathbed, I tried a maybe more sinister approach, simply by giving the concept a slightly different twist. A demon-infested living cemetery filled with decaying souls, forever being tortured with their own consciousness...or worse!”

And Martin van Drunen added the following: “Of course no Asphyx release without the magnificent cover art of Axel Hermann, whose interpretation of the title fits superb with the atmosphere of the recordings. His demons are ours and soon they will be yours too!”

On the live-front, Asphyx have now scheduled a special Incoming Death album release show for October 7th in Arnhem, Netherlands at the Willemeen venue. More details will be revealed soon