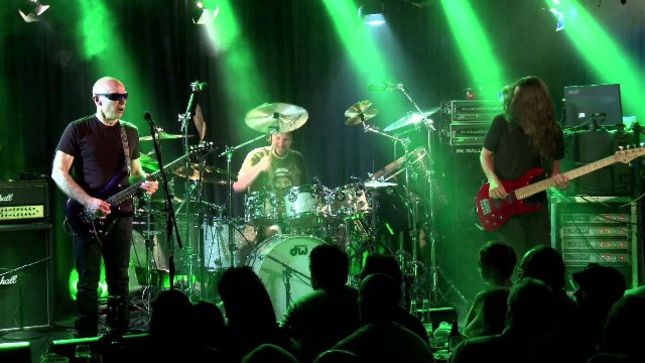 On his new double album, Scenes from the Flood, Bryan Beller enlists John Petrucci, Joe Satriani, Mike Keneally, Guthrie Govan, Nili Brosh, Janet Feder, Jamie Kime, Mike Dawes and other great players to help him deliver one of the most compelling concept records in recent memory. For the latest episode of No Guitar Is Safe, the bassist/composer/musical mastermind and Aristocrats founder plugs in two of his favorite basses (and also a guitar) to show you how he created his epic new collection of tunes. He also reflects on the genius of Satriani, Govan, and other phenomenal guitarists with whom he tours and records.

On working with Joe Satriani

Beller: "It's funny because the only meticulousness he brings to the road is getting his rig set-up right. He knows exactly what it's supposed to be, he's had the same tech for 30 years, they know what it's supposed to be. And so he's just out there, just trying to make sure that he can pull off the stuff that he needs to on all the classic songs because that's going to comprise a certain amount of set every time we go out. So, when he walks over, certain monitors will feedback the right way, he can he hear the drums and all that, but once he gets it right, and we're talking about the second sound show of the tour, we don't soundcheck after that - we don't soundcheck. The crew line checks and we walk on stage and the monitor settings are the same, and they better be good. It's also a level of trust and faith and also an aspect, it's kind of the mirror image of what he's doing in the studio.

So, his vibe live is, like 'Hey, listen, it's a live show. You got to go out there, have fun, be loose; it's just a gig.' He says, 'It's just a gig.' Of course, we want to go out there and play it right and rock out, put on a show for the fans, make sure the songs are good, but the songs are designed to succeed. I love Steve Vai, but not all of his songs were designed to succeed in live performance, which of course is a part of the trick. It's the Zappa thing in a way. That's not what Joe Satriani's gig is about. Joe Satriani's gig is about playing the melody, playing the groove, making it sound good and vibing the crowd, so yeah, he's really big on, like, 'Let's make sure to hang it loose and to have fun out there.'"

Beller recently released Scenes From The Flood. A video for the album track "Volunteer State", featuring Satriani, can be found below.

The album is described as, "An epic-scale modern progressive double concept album featuring an all-star cast of 26 musicians that asks: When the storm comes for us, the one after which things will never be the same, what do we keep, and what do we let go?"

Says Beller: "The Wall was the very first album I ever owned. It was a gift from my grandparents for my ninth birthday. I completely absorbed the story, the visuals, the long form double-vinyl structure, and the repeating themes that defined it as a concept album. Ever since, my favorite albums always felt like they were telling a story. So, when I realized I had that much music in my head, and something to say along with it, I got over my initial fear of tackling something so conceptually audacious, and finally just said, yeah, I’m actually doing this.”

Scenes From The Flood will be released September 13 and is available for pre-order here.