BILLY SHEEHAN Talks Proposed Reunion Of DAVID LEE ROTH's Eat ‘Em And Smile Band - "There Is No Actual Plan, But There Is A Willingness" 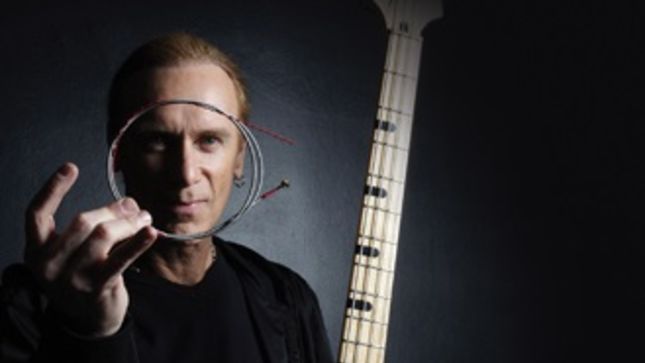 In episode 86 of The Double Stop podcast, host Brian Sword is joined by bass legend Billy Sheehan (The Winery Dogs, Mr. Big, Talas). He discusses his life and career, from his early days in Buffalo, NY and Talas to the near reunion with David Lee Roth Band, the recent fundraiser for Tony MacAlpine, and the new Winery Dogs album, Hot Streak.

On plans for a reunion of the original David Lee Roth Band (after the recent failed attempt): "There is no actual plan, but there is a willingness. I would sure love to play with him, and so would Steve (Vai), Gregg (Bissonette) and Brent (Tuggle)."

On the recent fundraiser for Tony MacAlpine: "Mike Portnoy was the musical director, which was a great idea because Mike will get the job done no matter what. Mike worked tirelessly at great personal expense, and he slammed it together in a short amount of time"

On the original plan of working with John Sykes in The Winery Dogs: "The instant I heard what it was I knew it wouldn't work. I played along, but I said this is not going to work. I had a feeling - call it intuition - but I thought this doesn't add up to me."

Sheehan recently confirmed there are plans for Van Halen singer David Lee Roth and the band for his solo debut album, Eat ‘Em And Smile, to reunite following the cancelation of their November 25 reunion attempt at the Lucky Strike Live in Hollywood.

Speaking with Eddie Trunk, Sheehan stated about more possible reunion attempts, “We hope to do it. We don't know if it will be just for one show. Maybe do… who knows? Rock In Rio, or do ten shows somewhere. And hoping to do it is not the same as planning to do it. We really hope it happens. And Dave was into it. And he was great (at Lucky Strike Live). We had a great time. It was just like the old days. It's been 30 years this last summer that we started the band, and next summer will be 30 years since the record came out, so we thought it would be nice to do something. And (Dave) seems into it. So I hope it can happen. It would just be a great way to complete that whole circle." 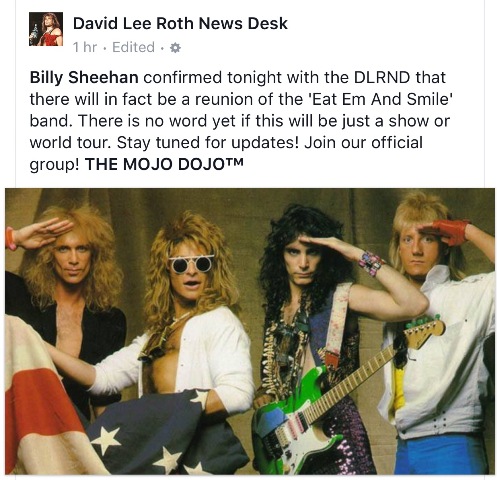 David Lee Roth and his first solo band (which debuted on 1986’ Eat ‘Em And Smile), were to celebrate their 30th anniversary on Wednesday, November 25th at the Ultimate Jam Night at Lucky Strike Live Hollywood/Highland for a free show beginning at 8:30 PM. Roth himself was set to make an unannounced appearance at the event. This would have been the first time in 30 years that Roth would have performed with guitarist Steve Vai, bassist Billy Sheehan, drummer Greg Bissonette, and keyboardist Brett Tuggle.

However, the show was canceled at the last minute by the Fire Marshal. Video below shows Roth leaving the venue, posting for photos and signing autographs for fans.

“I apologize about this evening”, he says. “Looks like we were too popular. There were too many folks, so we’re going to try and find a place that has… should we go to the Hollywood Palladium maybe?”