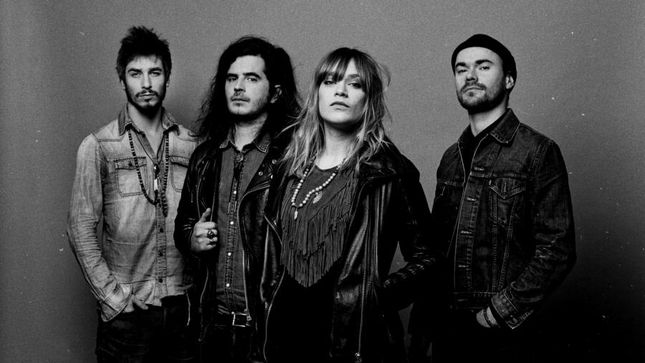 Black Mirrors will release their full-length debut album Look Into The Black Mirror via Napalm Records on August 31st. It is a prime example of all the wonderful stuff that can happen when you sell your soul to Indie, snotty garage rock, blues and some stoner rock.

The ban have released a video for the second single, "Moonstone", which proves once more, that these Belgian rockers are here to stay. “Moonstone” opens wide otherworldly landscapes, which become visible in the video. It’s the versatile mix of deep feelings and pure emotions that make Black Mirrors a new rising star.

Singer Marcella Di Troia on “Moonstone”: “We are super excited to release our brand new single and video clip for 'Moonstone'! Our upcoming album Look Into The Black Mirror shows a lot of diversity and 'Moonstone' probably is the slowest track on the album. It deals about… love. More particularly about all the insecurity and grief that comes with falling in love. It’s definitely one of our favourite songs ever written and we hope you’ll enjoy it as much as we do!

"For the video we worked again with our dear friend Sébastien Van Malleghem, as for our previous video clip 'Günther Kimmich'. We had such a great time recording it in the Tabernas desert in southern Spain!”

The beautifully unchained Marcella Di Troia sings, screams, croons and whispers on otherworldly ballads like "Moonstone"or "Inner Reality" and over the danceable grooves of "Lay My Burden Down" - and the band keeps the hypnotic beats and thunderous riff walls coming on their debut album Look Into The Black Mirror. She's literally the new voice of rock n' roll!

Pierre Lateur (guitarist) on the album Look Into The Black Mirror: "Look Into The Black Mirror is the result of all our personal, musical and spiritual experiences we've went through during the past five years. Overall the album is very song-oriented as we believe that 'melody' is the most important element in music. We dug into every aspect of what we enjoy in music; from straightforward heavy rock songs to very intimate, groovy or acoustic tunes. We recorded the album already months ago, and even after all this time we're still getting more proud of what we pulled off. We are so excited to finally share these songs with the world after such a long time! We'll play a lot of them on tour after the summer!"

The exclusive pre-order is available here.