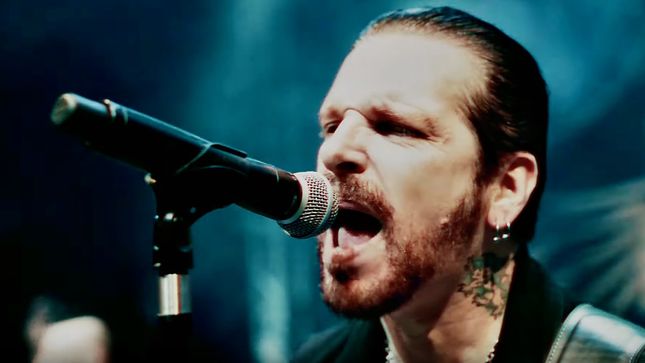 Off the back of an extremely successful 2019, Black Star Riders greet the new decade with an incredibly relevant new video, "In The Shadow Of The War Machine". Watch the clip below.

The track describes the condition in which we all currently live in: a world where economical interest prevails over the common good; a world where we are forced to face constant uncertainties. As the band says: “vote for a clown … you have a circus”. The music perfectly reflects the content: the pounding rhythm of each verse echoes the oppression of the war machine; the heavier and more aggressive chorus underlines the frustration we feel rising every day.

"In The Shadow Of The War Machine" is taken from the band’s latest record, Another State Of Grace, released last year via Nuclear Blast. The record is a stunning collection of anthemic rock songs recorded at Sphere Studios in Burbank, California in February 2019 and produced & mixed by Jay Ruston (Stone Sour, Anthrax, Uriah Heep).

Black Star Riders have announced they will perform as special guests on Saturday, July 18, at Ramblin' Man Fair 2020. The band will share the stage with the likes of Lynyrd Skynyrd, Tom Keifer, and Clutch.

Frontman Ricky Warwick comments: “Ramblin’ Man Fair is a fantastic festival! Black Star Riders will be making their return to the festival on Saturday 18th July as special guest to legendary Lynyrd Skynyrd… We can’t wait to come back and hope to see you there!”