BLACK STAR RIDERS Guitarist SCOTT GORHAM Talks New Album - "We Tried To Carry The THIN LIZZY Way Of Thinking; We Don't Want To Sound Like Anyone Else" 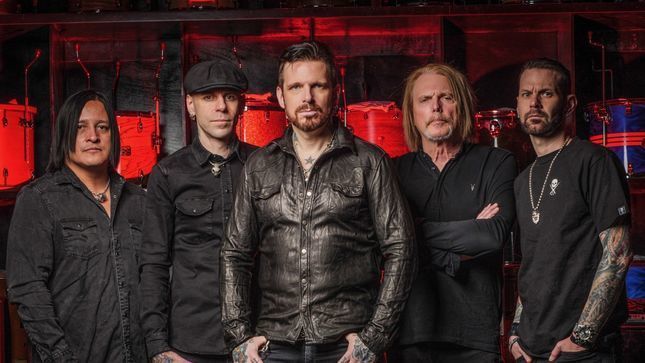 Robert Cavuoto at Metal Rules recently spoke with Thin Lizzy guitarist Scorr Gorham about the forthcoming Black Star Riders album, Another State Of Grace. He discusses the making of the album, how the band strives to not sound like anyone else, working with frontman Ricky Warwick, and tour plans. Following is an excerpt.

Robert Cavuoto: Most Black Star Riders riffs have a signature sound and style; something that tells you right away it’s Black Star Riders even before you hear Ricky’s voice. What is that special sound that sets you apart from so many other bands?

Scott Gorham: "God, that’s a great question! I wish I knew the answer so I could bottle it up and sell it to a few more people to have their own sound. (Laughing) I think the main thing with Black Star Riders is we tried to carry the Thin Lizzy way of thinking. We do not want to sound like anyone else out there. I think it’s the personnel and the band that contributes to wanting to be different than everyone else. I know my wife when she hears our songs on the radio says it’s completely different sounding than all the other bands being played. I have yet to hear it on the radio to have an opinion. I hope that comes across that we are trying to sound like ourselves and not anybody else."

Robert Cavuoto: As a fan since the inception of the band, I feel you are still evolving musically, do you feel the same?

Scott Gorham: "The longer you stay together as a band, the more comfortable that you’re with each other in writing songs and bringing up ideas. You are not afraid to get certain ideas rejected; which happens. You have to grow a thick skin and keep contributing as much as you can. We did this album in a completely different way than Ricky or I have ever done. It came down to Christian, who shared something that he did before and wanted to know if we wanted to give it a try. He had been out on the road with Stone Sour and always kept a ProTools set up on his laptop. He would use it on the road to record ideas. He told us to put our musical ideas on our iPhones no matter how long or short and send them to him to glue these bits together as a song. I’m old school, so I thought you all had to be in the same room eyeballing each other and spitballing ideas. I figured let’s give it a shot and sent him my 20-25 ideas and Robbie sent him his ideas. Christian sat on the tour bus in his downtime and glued them together. That gave us a format to work on when we got to rehearses in Los Angeles. You have to remember you only have two weeks to get an album together plus one week prior to rehearse it. In the old days, you would sit in a studio for three months! With timing being of the essence, I started to see the wisdom of doing it this new way. It cut out all the fat as you had 15 songs glued together to rehearse. You knew what songs you were going to gravitate towards with potential fixes and ultimately choose to record on the album. It was so cool; we may take this approach on the next album!"

Another State Of Grace sees the band deliver another stunning collection of songs. The bands new members Chad Szeliga (drums) and Christian Martucci (lead guitar) further developing the band’s burgeoning reputation as one of the most essential contemporary rock acts. Recorded at Sphere Studios in Burbank, California in February 2017, Another State Of Grace was produced & mixed by Jay Ruston (Stone Sour, Anthrax, Uriah Heep).

Longtime supporter Joe Elliott, vocalist of Def Leppard says, “I’ve been an ardent supporter ever since they started their journey having moved away from being Thin Lizzy and becoming a legitimate band in their own right. For me, this is by far their best effort to date.”

Vocalist Ricky Warwick says, “This has probably been the most enjoyable experience in the studio I have had making a record. The vibe and commitment the boys brought into this was stellar. Our most anthemic and soulful album to date. I’m very proud and excited for people to hear Another State Of Grace'”

"Tonight The Moonlight Let Me Down"
"Another State Of Grace"
"Ain’t The End Of The World"
"Underneath The Afterglow"
"Soldier In The Ghetto"
"Why Do You Love Your Guns?"
"Standing In The Line Of Fire"
"What Will It Take?"
"In The Shadow Of The War Machine"
"Poisoned Heart"

"Ain’t The End Of The World" video:

"Another State Of Grace" video: