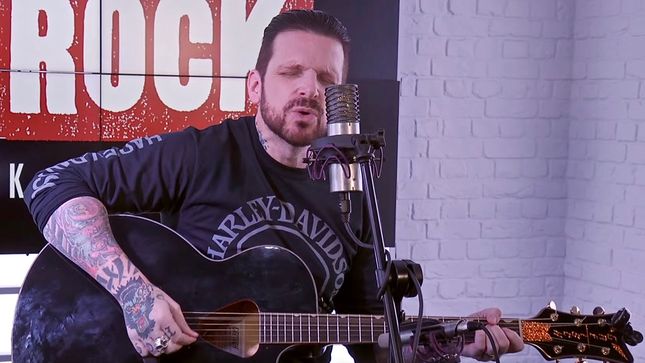 Scott Gorham and Ricky Warwick from Black Star Riders performed an incredible acoustic session for a handful of lucky listeners in the Planet Rock studios. Featuring the first ever live performances of "Tonight The Moonlight Let Me Down" and "Ain't The End Of The World", as well as BSR classics, "Bound For Glory" and "All Hell Breaks Loose". Watch below:

Black Star Riders recently released their new album, Another State Of Grace, via Nuclear Blast Records. In the trailer below, Robert Crane (bass) and Ricky Warwick (vocals) discuss new track "Tonight The Moonlight Let Me Down". Find out more about the lyrical content and how the track came together below.

The arrival of “Tonight The Moonlight Let Me Down” coincides with the release of Black Star Riders' fourth studio album, Another State Of Grace. It's the perfect song to celebrate the band’s new record: an upbeat catchy rock driven number that displays the band's distinctive sonic trademark. The single further enhances the band’s reputation as one of the most essential acts within today’s rock music scene, also showcasing their broad songwriting ability, which draws inspiration from every corner of the genre. The stunning saxophone solo played by legendary Hanoi Rocks' Michael Monroe is a prime example of Black Star Riders’ craft.

The band’s frontman Ricky Warwick comments: “A wonderful Scott Gorham guitar riff, a killer saxophone solo from Michael Monroe and a lyric about that first heartbreak and sense of loss but the memories are always there to keep you warm, all signed, sealed and delivered with a big sloppy kiss from Black Star Riders.”

Guitar legend Scott Gorham adds: “It was such a fun album to make and to pick a favourite song is tough. But Tonight the Moonlight...is definitely in my top 9!”

Another State Of Grace is available now via Nuclear Blast. The album sees the band deliver another stunning collection of songs. The bands new members Chad Szeliga (drums) and Christian Martucci (lead guitar) further developing the band’s burgeoning reputation as one of the most essential contemporary rock acts. Recorded at Sphere Studios in Burbank, California in February 2017, Another State Of Grace was produced & mixed by Jay Ruston (Stone Sour, Anthrax, Uriah Heep).

"Tonight The Moonlight Let Me Down"
"Another State Of Grace"
"Ain’t The End Of The World"
"Underneath The Afterglow"
"Soldier In The Ghetto"
"Why Do You Love Your Guns?"
"Standing In The Line Of Fire"
"What Will It Take?"
"In The Shadow Of The War Machine"
"Poisoned Heart"

"Ain’t The End Of The World" video:

"Another State Of Grace" video:

"Ain't The End Of The World" acoustic