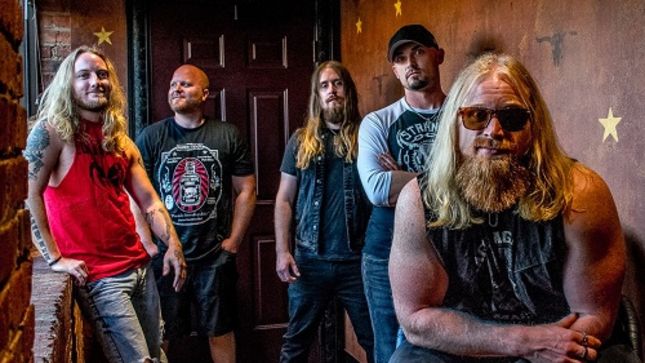 There isn’t a weak track on the ten-song CD, but without a doubt, the finest song on offer is “It Won’t Last”; an unparalleled tune overflowing with passion and emotion. “That song’s actually about a one-night stand that I had with an ex-girlfriend one time,” explains Matt. “Basically, we’d broken up and sometimes you… they say don’t text your ex, but we all do it. It happened, and it’s just about those lingering feelings. Drinking whiskey and making bad decisions.” Elaborating upon the song’s musical origins, Matt reveals, “I originally wrote the chord progression on an acoustic guitar, then (lead guitarist Ryan) Kiefer really ran away with it. He put in a lot of work on this album. I think the guitars on all the songs are phenomenal! He really put in the hours and drove us all crazy here at the house.”

The first video from Under The Sun is for the song “Can’t Sleep”. In fact, the clip, which can be seen below, is based upon a treatment Matt came up with on his own. “Yeah, I came up with the whole concept. We were working with the same guy who helped us shoot the video for ‘Prodigal’ (from the 2017 album Burn The Ships). We filmed it in our tour manager’s backyard.” Matt’s ex-girlfriend appears in the video, which admittedly makes it a little weird for the singer to watch now. “She did a good job, but yeah, a little bit of course. That’s kind of what the song’s about, those feelings you have underneath the surface that come bubbling up. And it kind of came to life, so there you go.”

Between “Can’t Sleep” and “Lay It On Me”, infidelity seems to be a lyrical theme that’s explored on Under The Sun, is that accurate? “Um, yeah… infidelity hasn’t really been a big part of my life. I haven’t ever really been cheated on; I don’t think. And I haven’t really cheated on anybody. But I see a lot of it in other people’s relationships, friends and family members’ relationships. It’s pretty common in today’s world to see that.” Essentially all that’s required to hook-up with someone is swiping right on Tinder. “Absolutely! Nobody commits to anything anymore. Even going for a beer. It’s like, ‘I’ll see if I can make it.’”

Conversely, the ‘80s stereotype of a rock band on the road surrounded by groupies ready to do just about anything to gain the affection of their favorite musician doesn’t seem to exist anymore either. “No, that doesn’t really… I haven’t seen it. I mean, it’s harder to do that kind of thing nowadays cause everybody has a camera in their pocket. And I think everybody’s a lot more respectful of women nowadays too.”

Another song on Under The Sun, “Come Get Your Coat”, would appear to tie-in with the intimate fling topic. “‘Come Get Your Coat’ is interesting because I was actually on the other side of that. I was the one that left my jacket and got that awkward text. When it pops up on your phone, it’s kind of the worst feeling in the world, when somebody kicks you out after a one-night stand, but they’re letting you know you left your whatever over here.”

Blacktop Mojo has done extremely well on YouTube. Their cover of “Dream On” by Aerosmith has garnered 13.4 million views, and their rendition of “In The Air Tonight” by Phil Collins has received 2.9 million views. Yet surprisingly, they’re still an unsigned, independent band. “We had a couple of label offers that we decided to forego and make a run at it on our own again. The deals just weren’t for us this time around. I don’t want to knock label deals; there’s a lot of great labels, and a lot of great bands on labels. But for this album and at this juncture, it just wasn’t for us.” Under The Sun marks three independently released albums for Blacktop Mojo, the band must be getting pretty used to the ropes by now. “Yeah, we’re kind of stubborn like that too. We didn’t want to give up much control at all. We like doing it on our own. It’s hard, but it’s fun.”

The two aforementioned covers are huge songs in their own right, and Blacktop Mojo’s versions have proven to be vastly popular. It would have been very easy to tack another cover song onto Under The Sun, but the guys did not go that route. “We wanted to take a break from the covers for a while. We’ve been getting out there and touring a lot; trying to get our own music out there. Nothing against covers, I’m sure we’ll do more covers in the future, cause covers are fun; and we started as a cover band, like a lot of bands do. On this album, there wasn’t really a lot of room. We have a lot of strong songs; we didn’t need a cover.”

After the Burn The Ships cycle was complete, as Blacktop Mojo were about to begin the process that would become Under The Sun, was there anything you wanted to replicate; or do completely differently? “Well, we quit our jobs on the last album, so we had a lot more time to put into this album everyday, cause we didn’t have to go to work. We got off the road last year and… we’ve got a little bit of recording gear. We all live in the same house together, so we basically jammed every day. Kiefer was constantly playing guitar, making up riffs. We just really wanted to put the time into pre-production for this record, that we didn’t really get to put in on the last one.”

Was the studio experience smooth this time around? “Yeah, it went really smooth. We worked with Philip Mosley, the same producer who helped us do the last two albums, so he’s really familiar with us. We knew what to expect, and what to practice for. We were knocking out probably three songs a day at one point; the bare bones of them. Then we’d come back and do the overdubs, stuff like that later. I don’t think it could have gone any better really.”

It’s rather ironic – and completely coincidental – that the new Blacktop Mojo album is titled Under The Sun, and Volbeat’s new single is “Last Day Under The Sun”. “Yeah, that’s definitely coincidental! There’s a band called Goodbye June, kind of retro sounding. They just put out a new single not too long ago called ‘Anywhere The Wind Blows’ [Blacktop Mojo has a song on their Burn The Ships album called ‘Where The Wind Blows’]. There’s only so many words in the English language.”

As far as Under The Sun goes, which came first – the album title or the song? “The album title actually. We all grew up in Church, and there was a Bible story that Nathan (Gillis – drummer) came to me with saying, ‘That would make a cool song.’ It’s King Solomon and he’s running through women and wine, basically looking for a meaning in life in all these things that we all look for meaning in life in at one point or another; making all these mistakes, just trying to find inner peace and meaning in life. I think the Bible quote is, ‘What is, has, and shall be again; there’s nothing new under the sun.’ Which to me kind of translates to, we all make those same mistakes, we all go down the wrong path at one point, and we all are trying to figure this thing out.”

“The song itself, a lot of the lyrics came from feeling like I wasn’t getting anywhere, feeling that I was sitting on my ass too much, and that I was wasting the opportunity, wasting the time that I have been given. Whenever you have that kind of freedom, it’s difficult to have the discipline to make yourself get out of bed and get to work. It’s difficult to kick your own ass.”

Blacktop Mojo will be doing extensive touring throughout 2019 and 2020 in support of their new album, Under The Sun. Currently confirmed shows are as listed: