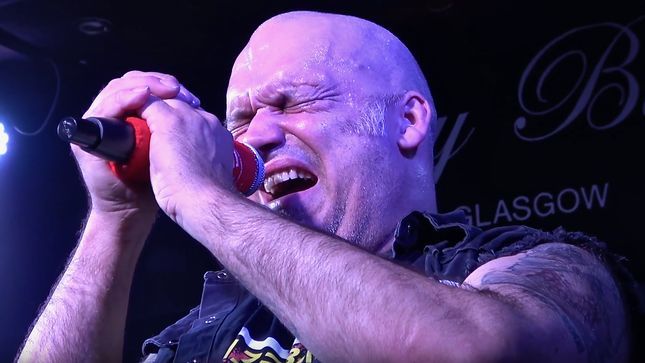 Blaze Bayley spoke to eonmusic about 25 years since joining Iron Maiden,  the "incredible roller coaster of emotions", and the difficulties he faced in replacing Bruce Dickinson. Blaze made his comments during an in-depth chat with the music site at Burr Fest in London in early March.

On how he views his performance on The X Factor and Virtual XI, the brace of albums he recorded with Maiden; "The horrible thing about recording is that the songs are so fresh, you do your best to get them right and then record them the best you can, but during the tour, it’s like the edges get rounded off. They start to feel like worn-in shows, like a comfortable pair of jeans, and you start to feel really comfortable with it, and so you haven’t got that feeling when you record it. 25 years later, there is this deep familiarity with the songs, and I’ve more confidence than I had back then."

On why the Virtual XI sessions yielded almost half as many songs as those recorded for The X Factor: "We just ran out of time. It was just a practical thing. By the time you try and put things in place; “around what time could we release the album if we could get it done? That would mean that we’d have to start touring then”. It’s a big band, you’re booking a year in advance, and so, suddenly the tour starts looming and you go; “you know what? We don’t have the luxury of seeing how we feel; these are the songs we have, let’s record them and let’s go”. And that is the normal situation for a lot of bands. People don’t have the luxury to go; “well, how much time do we want to spend?” We did have that luxury on ‘The X Factor’, but, I mean, it’s eight songs, and it’s still a good chunk of music; it’s still longer than ‘Reign In Blood’."

On why some people didn't accept him replacing Bruce Dickinson: "Your favourite singer has left your favourite band, and here’s someone that you don’t want; it’s almost like having a wicked stepmother in a way!"

Read the full interview at eonmusic.

In spring 2019, Blaze Bayley launched the Tour Of The Eagle Spirit, taking in venues in Netherlands, Germany, Austria, Slovakia, Belgium, France, UK, US and Canada. In September 2019 Blaze took that tour on the road a second time, with a sequence of shows across Germany, Netherlands, Poland, plus two special concluding concerts at the Melodka venue, Brno, Czech Republic. All-told, the tour totalled 59 shows and those final two shows were captured for Blaze’s forthcoming release, entitled Live In Czech, a live album and DVD.

Watch "Fight Back" from the upcoming release, below.

The theme of the tour followed on from Blaze’s Infinite Entanglement trilogy of albums and the setlist particularly featured some of the more epic songs from the trilogy which hadn’t previously been included in concert setlists. The set also contained a selection of songs from his albums with Iron Maiden during the 1990s.

The audio is produced by Blaze’s gifted guitarist/co-writer Chris Appleton (of British metal band Absolva), with outstanding artwork by Akirant Illustration (illustrator for Iron Maiden & Star Wars) and filmed by his regular video contributor Rich Pembridge. Blaze is proud to present Live In Czech on his own independent Blaze Bayley Recording label, the well-established home for all Blaze Bayley releases. Release date is currently planned for April 3, 2020.

The Live In Czech album will be released on double CD and double DVD including a special behind-the-scenes film entitled The Road To Brno, and is available to pre-order now via the webshop at BlazeBayley.net with four buying options. Option 4 (Ultimate) offers, in addition to the two CDs and two DVDs, a USB memory stick pre-loaded with an HD version of the concert and The Road To Brno, as well as a custom patch and custom guitar pick.