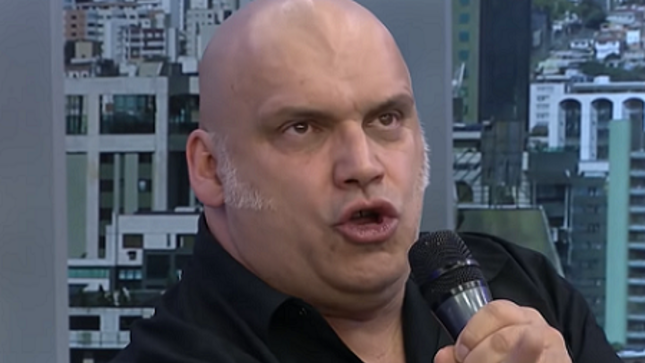 Vocalist Blaze Bayley, who sang for Iron Maiden from 1994 to 1999, was interviewed by Rockfiend Publications at Ivory Blacks in Glasgow, Scotland earlier this month. During the chat, which can be seen below, Bayley spoke about how he was selected to replace Bruce Dickinson; an excerpt has been transcribed as follows:

"Maiden were holding auditions for the new singer. And I said, 'I'll have a go for it.' And I did. I think they had 1,500 demos that they had listened to, and then there were, like, the 12 disciples that were chosen for the audition. And I was lucky I was one of those 12. You went to the studio to sing live. There was ten songs that were in the set at the time — ten of the classics that you had to learn — and I went and I'd done my best. And I was very, very surprised that they chose me to be the singer, because my voice is so different to Bruce. We did look a little bit alike, but our voices were radically different. But I think what it was they wanted, a change, and the albums that I did, The X Factor (1995) and Virtual XI (1998), that was the real start of the progressive era of Iron Maiden, and I learned so much about songwriting and about my voice. And it was an incredible, incredible experience. The music that we came up with was just fantastic, I think."

In other news, Blaze Bayley, has announced that he will be playing a special Iron Maiden setlist at selected festival appearances in 2019. Choosing songs from his era with the band, these shows will celebrate 25 years since Blaze joined Iron Maiden. This will be the first and last opportunity to see such a setlist.

Blaze, who released a new album and DVD, Live In France, on March 1st, sees this as the perfect opportunity to celebrate his time in Maiden which was such a positive experience and influence on his career as a whole.

Blaze has this to say, "25 years ago my great adventure with Iron Maiden began. It was a wonderful five years in my career and something I’m very proud of. Since then I have toured almost every year, and made 11 studio albums and three live albums. Recently, many fans have asked me to perform songs from the two albums I recorded with Iron Maiden, so this year to celebrate that magical time, I’m doing a full set of my favourite songs from the X-Factor and Virtual XI albums at festivals. My voice has developed and changed since my time as lead vocalist with Iron Maiden. Now I feel I’m singing better than ever, so I’m very excited about singing those old songs with the voice I have now."

These festivals will feature a special Iron Maiden setlist from Blaze Bayley:

The band at these shows will be Blaze’s regular touring and recording outfit taken from British band Absolva, plus Iced Earth bassist / Absolva guitarist Luke Appleton. The lineup is as follows:

Chris Appleton adds, "Normally when we perform as Blaze’s band we are a four-piece including Blaze, so just myself on lead guitar and that really works for us. But for these Maiden sets, we think it’s really cool to bring in my brother Luke as second guitarist to enhance the Maiden feel. It’s an honour for us to play these songs with Blaze, increasingly recognised as an important chapter in Maiden’s history."

An additional celebration of the anniversary is a re-interpretation of the X-Factor album cover art done by the very talented Akirant Illustration, to help promote these shows and on a special run of t-shirts. Blaze Bayley would like to thank Akirant for his excellent work and also thank Iron Maiden manager Rod Smallwood and his team, for their kind authorization and messages of support.

The 25th anniversary t-shirts are available at the webshop now, along with the very latest Tour Of The Eagle Spirit tour merch. For more information please go to the Blaze Bayley website.